Lyle in Cube Sector is an Indie Metroidvania game following the titular Lyle through a world filled to the brim with throwable blocks and evil cat-snatchers. 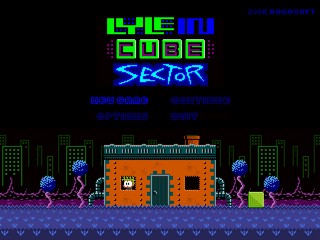 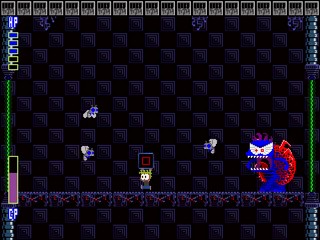 It's taken a long time. Lots of routing. Lots of attempts. Finally achieved sub 15:00, and I'm happy with it.

Tricks used (by order of appearance):

Damage boost When Lyle takes damage he will recoil backwards away from the direction he's facing. By turning around right as he takes damage, Lyle will recoil in the opposite direction, allowing him to pass through the damage source.
Trick #2 I don't know if this has a name, and it's Lyle-specific, but it is used a lot in speedrunning this game. When standing on a cube, by pressing Lift and Jump in quick succession, Lyle will jump off the cube immediately after picking it up, acquiring the cube and a higher jump.
Invincibility By savewarping (or savewarp-newgame even) while Lyle is riding the elevator, the game will preserve his invincibilty. If Lyle is invincible and he savewarps, he will still be invincible. The only things that break Lyle's invincibility are riding the elevator again, DancyFlower, and entering the final boss's second cutscene.
Trick #4 If Lyle begins to summon a cube right before the transition to a new room, then upon entering the next room the phantom cube will appear faster than had Lyle begun to summon it after entering the room. This may be due to human error, however. It saves less than a second over the entire run.
Quick Buzzby Buzzby's green bullet usually comes down under the pong bricks, and it has to break through a bunch of them before it can hit the boss. By jumping and tossing a cube straight up, however, the green bullet can be reflected right back into Buzzby practically the moment he shoots it.

A by-time breakdown of the run:
0:06 Start timer on new game
0:32 Going to be getting Cube Jump first. Damage boost through DancyFlower. It is possible to do this and take only one HP of damage, but a lot harder.
0:37 Using a cube to cross the spikes may be faster, but I have not found an efficient enough place to toss it for that to be the case.
0:40 By pausing just a tiny bit before jumping over the Magibear, I end up not getting hit by his attack. (Do it without pausing, and Magibear will turn around and shoot Lyle out of the air near the end of his jump.)
0:45 Entering this room I rely a small amount on luck that the Boingo will play nice and let me jump past him.
1:16 If DancyFlower only does one hit of damage, Lyle can damage boost through this J-Raff as well.
1:24 Interesting note: it is literally impossible to leave this room without savewarping if Lyle does not have Cube Lift.
1:55 Good luck on the first Boingo, and I managed to turn around at the same time the second one hit me to minimize time loss. (Otherwise I would have recoiled backwards)
2:09 I got Cube Jump before Cube Kick. The time is identical either way. One can get Cube Lift and then walk directly to Cube Jump instead of savewarping, and it's a couple seconds faster. It is not feasible in a run, however, because it requires going through the RNG-Boingo room twice and taking no damage both ways.
2:32 I could use trick #2 here, but if I mess it up (which barely even happens.. on this cube anyway) then it does cost me some time.
2:34 I pause on top of this cube because it seems to make the StingBeetle not shoot at me.
2:39 I could also use trick #2 off this cube, but I messed it up.
2:57 I also try to use trick #2 on this cube and mess it up.
3:31 First successful trick #2 of the run
3:41 Usually I try to turn around if I see that I'm going to be hit by these guys to recoil forwards and minimize time loss.
3:57 Elevator/Invincibility glitch
4:15 The BIG NOOB moment of this run. Cost me like four seconds, but fortunately my previous Phantom Cube Magic segment messed up pretty badly later on.
5:47 What boss fight?
5:52 It's a tiny bit faster to go back and fight Klobbur instead of savewarping.
5:55 First instance of trick #4, though it saves no time here.
8:01 Quick Buzzby fight strat
+8:10 A little manipulation to get Buzzby back into the center as fast as possible. (That is where he shoots the green bullet)
8:29 Last savewarp of the run, and I still maintain invinciblity afterwards.
8:40 I could use a Phantom Cube to jump up here, and it would be a tiny bit faster, but my Cube Power doesn't regenerate super quickly, and I need it to be almost full when I reach the boss.
8:53 The first two of three Phantom Cubes I can afford to summon before the boss.
9:28 The music in this game <3
10:09 Only trick #4 that saves time. I summon one cube before entering the boss fight, because Cube Power regenerates during the cutscene.
10:21 I am holding Right and Toss during the cutscene to land a guaranteed first hit on Vyle.
10:23 During this fight, when Vyle jumps he is the most predictable, and right as he shoots a bullet he stops moving, so those are the moments I aim to hit him. If I miss even one cube here it will cost a few seconds.
11:03 Boss fight over with no Cube Power left. If I had missed, I would be forced to wait for some to regenerate.
11:07 Any Cube Lyle is holding as he enters this room will disappear, and Cube Power does not regenerate during this cutscene.
11:35 PsychoVyle generally jumps 7 times (but it can be anywhere up to 9). The fight is not very dynamic, and any timeloss comes from PsychoVyle jumping extra times, spawning too many flies (at least 1 but up to 4), or Lyle not destroying the flies in a timely manner.
12:01 With full Cube Power upgrades, Lyle can toss cubes at PsychoVyle's mouth right as it opens and easily destroy all the flies right as they spawn. The strategy I'm using (hitting all the flies at once) seems to be best for any%.
13:48 Could've been better with these flies by letting them circle back around instead of going for the jumping quadkill, but I got greedy.
14:44 2 flies - 2 flies - 4 flies - 2 flies. That's pretty good for RNG.
15:01 End of input. Time according to WSplit was 14:54.56. Time according to Yua was 14:54.8