The Mafat Conspiracy is the US title of the 1990 Famicom hit(?) with the glorious name Golgo-13 Episode 2: The Riddle of Icarus, sequel to Golgo-13: Top Secret Episode. There's something about nuclear warheads and soviets and stuff but come on, just bask in those titles. Marvelous. 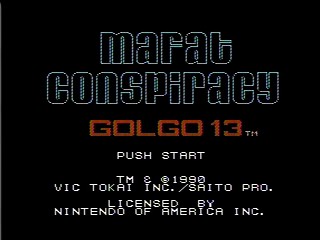 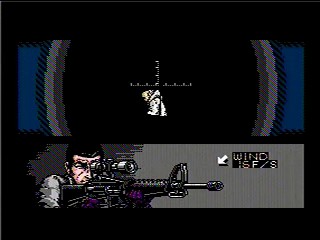 First off, thanks to all the SDA staff past and present for their help and dedication to maintaining the site. Also, thanks to my parents, who fed my gaming addiction, and my wife, Mrs. Emptyeye, who tolerates it to this day. Additionally, thanks to Usunoro, who generously donated a copy of this game after seeing what I had done with Top Secret Episode (Which will, maybe, one day actually come off of my DVD recorder and onto the site!).

The Mafat Conspiracy (Its Japanese title translates to "Golgo-13 Episode 2: The Riddle of Icarus", for the curious) is the sequel to Golgo-13: Top Secret Episode. In terms of gameplay, it's the superior game to both play and watch--there aren't any autoscrollers, the pace is faster, it's probably a more difficult game due to the fact there's no easy way to recover health, and most importantly, you can skip cutscenes.

This run is a blast from the past, both literally and figuratively. The run was actually done in April of 2013, making it almost a year old as of the time I submitted it to SDA. In a figurative sense, I had to party like it was 2004 with this run...suffice to say that information on this game was scarse, to say the least. How scarse? TASVideos doesn't have a TAS of it.

Not "A TAS that I'd be able to use." I mean that literally (And not the new definition of "not literally") no one had so much as submitted a TAS of the game to the site. In fact, from what I can tell, no one has so much as discussed it on TASVideos. At all.

So, given that, I think I did okay here, although there is, as always, room for improvement. In particular, the death in 5-5 was a bit weird--I entered the area not really knowing if I should or shouldn't take an intentional death. The game ended up deciding for me, but I probably should have either reset or killed myself more decisively, instead of what I did here.

Anyway, as you know, I love doing in-depth comments. So here we go!

1-1
Pretty standard, if you always make this sequence of moves. By the way, two moves that Golgo-13 has lost from Top Secret Episode are the Moonwalk and, more important, the ability to move in the air while jump-kicking. Trying to jump-kick just causes him to plummet to the ground in this game.

1-2
Clearly, Vic Tokai despise speedrunners. Top Secret Episode had the worst kind of unskippable cutscenes--not only did you have to hold a button through them, but at the end of every one, you had to hit a DIFFERENT button, or you'd go back and have to re-watch the cutscene. Mafat, thankfully, allows you to skip cutscenes...but there's a catch. There are two cutscenes that basically "power you up"--the first gets you a gun and 30 bullets; the second upgrades your capacity to 60 bullets. If you skip these cutscenes, you get the gun, but NOT the bullets in the case of the first...and if you skip the second, you NEVER get the capacity upgrade, and you're stuck with a maximum of 30 bullets. Thanks for being committed to fair and balanced gameplay, Vic Tokai!

Anyway, the good thing is that there's no RNG in terms of enemy drops--a given enemy will always drop the same thing, meaning you can farm off of given enemies since they tend to respawn. In the case of a speedrun, it's still useful to know what enemy will give me those initial bullets so I can actually use ranged combat. Bullets are also essential in the maze sections.

One note is that starting in this level, you have to be careful with the controls. Holding up when you jump leads to the high jump you usually see me do. But holding up in front of a door will cause me to enter it, which I don't usually want in a speedrun.

1-4
I enter the right side, because it's the much simpler path. Each "kachunk" is me taking a step. These maze areas are the one thing I don't like compared to Top Secret Episode's--they move MUCH more slowly than in TSE. Anyway, this building is the real reason I grabbed the bullets in 1-2--without them, I have no way to kill the enemies in here.

I grab the health because I have to kill the enemy anyway, and this is one of the very few health pickups I'll get.

Arm of Mafat and Escape
Pretty much all the bosses boil down to "Hope they cooperate and let you lock them down in the corner". After that, Arm of Mafat reveals that he set up a bomb set to blow up the building in five minutes, and dies. Now, he could have just used a deadman's switch and instantly blown up the building and Golgo, but hey. Anyway, it's just a reverse walk out of the building from here.

2-1
I basically get wrecked here, because it's the quickest way to get through the stage. Really!

2-2
90 seconds is actually a pretty tight time limit here. This section reminds me of Rad Racer 2 graphically, although Bayou Billy's driving sections may be the more apt gameplay comparison, what with the grenade tossing and all. Something to note is that you'll never go slower than about 200 KM/H when turning, so long as you shift down into second gear (And yes, this car is a standard transmission). 14 seconds left is actually really good for clearing this section.

Sniping
Sniping in this game is weird. Shoutouts to __sdfg for figuring out how it actually works. In this particular section, you have unlimited time to line up and take your shot. The wind can be anywhere from 0 to 19 F/S in a given direction. For the four cardinal directions, up to 7F/S will affect your aim by 1 pixel/F/S, and anything beyond that by an additional 2 px/F/S. For the diagonals, 1F/S wind (As here) doesn't affect the aim at all. Up to 7F/S affects is by 1 px/F/S, and anything beyond that alternates between 1 px/F/S and 2 px/F/S. Luckily, the wind is calm and I take the shot pretty quickly. By the way, when you miss, you get to the re-do the driving section. Sometimes the game will give you an indicator of where your shot went..but just to troll you, the indicator will beslightly below and to the left of your actual shot (Most noticable if you miss with a 0 wind).

At this point, being low on both health and ammo, I elect to take an intentional death to refill both. Dying tends to be the fastest and best way to replenish your supplies, particularly in a place like this that has an easy pit to jump into.

Other than that, the section goes pretty well. The maze section is a simple north-to-the-wall-then-east-to-the-exit affair.

4-1
The enemies in this level can either duck to shoot, or shoot standing up. Which one they do affects the trajectory of their bullets. Also, falling between the cars is an insta-game over. There are some parts I have to hesitate due to bullet trajectory or because jumping would cause me to jump between the cars.

4-2
There are a couple times when I get the "upper" bullet trajectory, forcing me to briefly stop to make sure I jump over them, which is unfortunate.

KHAAAAAAAAAAAAAAN!
The same deal as Arm of Mafat--back him into a corner, kick him to death.

5-1
Here begins the most random part of the run. The guys with swords have random and erratic movement. I kill one guy early in the level for more health. I then proceed to get wrecked by this game's finicky controls. The game basically automatically decides whether you kick or fire your gun based on how far from the enemy you are. As you can see here, the game chose...poorly, causing my face to melt. Wait, that's not quite what happened, but it did cost me some time. Other than that, any hesitation after killing a foe is to grab more supplies, be they energy or bullets.

5-2
This is the start of "Golgo-13 and Emptyeye Visit the Zoo". A lot of "Scorpion!...MONKEY!" left my lips while doing these runs, and I eventually add "DOG!" to the equation starting in 5-3. In the section with the two pits close to one another, I kill the guy on the left first, first for health, then just because his boomerang will hit me if I don't shoot him first the second time.

5-3
This is not a jungle, it's a cave. Other than that, I fire some shots to try and preemptively kill enemies.

5-4
At roughly 2:47, I wait for the boomerang because trying to jump before he throws it will result in it hitting me. Any other brief hesitations are to avoid getting hit.

5-5 (Note that the game calls it "6-5" for some reason)
Here's where the sloppy semi-intentional death happens. I was low on supplies anyway, but as I said, I should have decided whether to take the death or not on my own, instead of having the game do it for me. After that, I try to use the sprite limit where I can, and where it won't cost more time than just walking and jumping over an enemy.

The maze is standard stuff.

5-6
Letting the first two monkeys jump over me causes them to pursue me, putting me 2/3 of the way to the sprite limit. Hitting the jump over the first gap is huge; missing it and landing on the lower ledge makes this a lot more complicated. The third monkey pursuing me means I have a clear path through most of the level. From what I can tell, there's no really good way to avoid the last enemy.

The maze is still standard stuff. I manage to not take any wrong turns this time!

Arm of Mafat Mark II
This time he has a ranged attack! Fortunately, he doesn't use it before I lock him down.

The Escape
This is worth mentioning--I now get to traverse 5-7. 5-6, and 5-5 backwards, plus the mazes, and I get 5 minutes to do so. At least there aren't enemies this time!

The jump at 4:43 on the timer deserves special mention. As I note here, that is truly The Hardest Jump in this game, and indeed, in any game where you're not trying to glitch something. That's because it is literally a frame-perfect jump when moving. Stopping beforehand seems to make the jump, if not 100% consistent, at least more consistent. The rest of the escape is pretty run-of-the-mill stuff.

Sniping Part 2
This is probably the toughest snipe in the game. You only get about 6 seconds to take your shot--less if the shot requires you aim to his left. Also, while his sprite moves up and down, his hitbox doesn't. Finally, his hitbox isn't where you'd expect it to be--it starts in about the middle of his head, and goes back to the end of his hood, rather than just being "his head". By the way, missing this shot sends you back to the "end" of 5-7. Yep, miss this shot and you get to do the entire escape, complete with The Hardest Jump, over again.

Sniping Part 3
Again, the hitbox here is strange. You really want to aim between his shoulders, not his head. Once again, you only have a few seconds to take this shot.

And that's it! For the further adventures of Emptyeye, check me out at the following places:
http://emptyeye.com
http://twitch.tv/emptyeye
Twitter: @EmptyeyeDotCom