Released in August 2010 on PC, PlayStation 3 and Xbox 360 by 2K Czech, Mafia 2 is a third-person action-adventure game, sequel to the game Mafia, where you play as Vito Scaletta as he turns to a life of crime in an attempt to repay his deceased-fathers debts. The game features a lot of gunplay and an impressive soundtrack in the form of in-game radio stations. 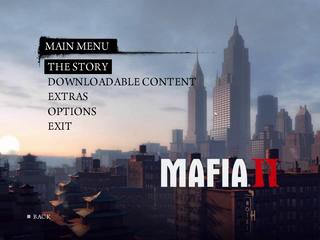 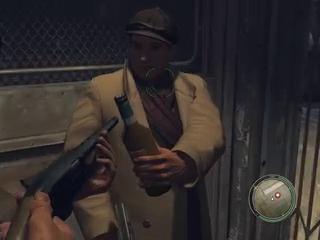 Hello, and Welcome to my Mafia 2 Speedrun. I mainly started a run, because there was a Mafia 2 run in the verfication queue, but the runner never submitted any videos. So why not give it a try. After some research i found the runs from zu3stTV and readandyellohjuice on Youtube. I watched their runs and found some room for improvements.
The game is pretty much straight forward and of course scripted as hell, but there are still some doable tricks in it. Since it's been developed parallel for consoles, the controls are as accurate as on a console. You notice this mostly in gunfights. While talking about guns, there are only a few useful.
- the Magnum, because it's most likely a instant kill weapon.
- the M1. Same reason as above.
- the MP40 and the M1A1. Both have a high damage.

I chosed easy for this run, because the game is pretty unbalanced. While you can take several direct hits on easy, even with guns which cause a lot of damage. On high difficulty instead you only can take one to three hits and then you are dead.
One last thing, for segmenting i used the autosaves ( as there is no other option for segmenting ;)), so there is no save penalty.

Chapter 1
There is not much to mention as the scripts allow you to move and you have basically no freedom. In front of the town-hall you have to kill the guy on left at the top of the stairs first. When you shot he hides behinds, the sandbags and then he becomes a even harder target.
Done in 1 segment.

Chapter 2
This chapter is still some sort of tutorial. First a fist fight tutorial, where you have to follow the commands which pop up on the screen. Then a lockpick tutorial. Instead of using the lockpick at the car just smash the window.
As soon you get in the cops are chasing you. To shake them just drive around the Gasstation in the small alley with the bodyshop at the other side of the street. When the police lost their interest in you, vistit the bodyshop, change the plates and tune the car. The tuning is useful for other chapters too.
At Brusiks scrapyard you have to do a shooting tutorial. Then you have to steal a car, which is simple.
Done in 6 segments.

Chapter 3
The first thing which needs to be mentioned is the fist fight at the docks. It's important to keep the initiative and don't take any punches. The next point is where you have to pick up Maria. In most cases when you have to pick up a NPC, except Joe sometimes, you don't have to wait. Just go on with your tasks, they will be teleported in your car.
The heist is another easy thing just get in through the back, kill the guards, get the key, then get the stamps and get out through the window on the top floor.
When you have to sell the stamps you can wait, but it is slower then selling them. You have to cross at least once the bridge, because on your island are only 5 gas stations. The first gas station i visited is near Freddies Bar. Then i used the long bridge, because near the end is another gas station. After that i went back on the main island and vistit the last 4 gas stations. Starting with the one near the mall and ending with the one near Joe's appartment.
Done in 8 segments.

Chapter 4
On the roof of the mall, have to kill all policeman otherwise Joe won't follow you and you can't continue.
The first wave consist of 3 policeman, so does the second wave. The last wave consist of 4 policemen. you can kill them at the door. When you are back on the street, turn right, pickup a decent car on the parking lot and shake the cops
Done in 4 segments.

Chapter 5
The only part, which is interesting, is where you attack the distillery. When you are in the distillery chose the path on the right side. Kill the guy with the shotgun at the end, as soon as possible. It's the most powerful weapon in this chapter, so pick it up. Then kill everyone on your way to the elevator, if you are standing in front of the elevator, you are able to shoot the gangsters, but they can't hurt you. The rest is just straight forward. Just for the coolness i killed the guys with the tommyguns with one shot.
You don't have to worry about the cops in the driving part, if you drive good they aren't able to get you.
Done in 5 segments.

Chapter 6
In the first fist fight with O'Niel, you have decide either you beat down him or get beat down. But getting beat down is easier. In the other fights have to win, so don't lose the initiative and get punched.
Done in 6 segments.

Chapter 7
This Chapter is just driving, even the car trick doesn't work.
Done in 2 segments.

Chapter 8
The cigarette delivery is the longest part of this chapter and it's also monotonous. Only driving the truck is a bit tricky as it needs quiet a lot of time to accelerate and every dodge reduces your speed. During the chase you aren't able to catch the greasers. Near Joe's apartment i jump down to the next phone booth, it's just slightly faster then driving on the normal street, but it looks much cooler. When you attack the greasers at the old foundry, your A.I. partners depend on you. If you are aggressiv, they are aggressiv. If you are carefull and proceed slowly, they will do the same. You will need to kill the enemies, as your A.I. partners won't follow you when they are still alive.
The best weapons you can chose there are the Magnum or the M1, because they have a high damage. From now on it's just driving, but there is one interesting bug. Derek's marker is active eventhough the cars are delivered. This also happens in every other chapter from now on. Continuity proof for teh win!
Done in 5 segments.

Chapter 9
The Smith Custom 200 is the fastest car you can get, at the beginning of this chapter. So it's worth restarting the chapter till the car spawns in front of your apartment. When you have to chase Luca, you have to follow him. Sadly there is no way to avoid that. The sneaking part in the meat factory depends just on timing, then you can rush through.
The fist fight works like all the others. In the following shootout, just rush out the door, they don't react that fast. Before the reinforcements arrive, get closer to the gate, so you can take out on car. After that fight it's just driving.
Done in 6 segments.

Chapter 10
The tricky thing here is the car chase. There are 2 routes Falcone can take. The closer you get Joe to Falcone's car, the faster it's over. This was a lucky attempt and i was supprised that it worked that flawless. Especially that funny end.
Done in 10 segments.

Chapter 11
Almost twenty minutes driving. A very boring chapter. Only killing the leader of the Irish guys was a bit tricky.
Done in 7 segments.

Chapter 12
Mostly driving, but with a big shootout. In this shootout you just have to fight your way to the next best car.
As soon you are in the car, you can drive back. Joe and Henry will be teleported in the car.
Done in 4 segments.

Chapter 13
Driving, a car chase and attacking a resturant. Pretty much straight forward and pretty much like the previous chapter.
Done in 5 segments.

Chapter 14
I used the way to take out Derek with the grenades, from readandyellohjuice. It's safe and fast. To gather the rest of the money i robbed three weapon stores. When you have to search Joe, drive directly to the Mona Lisa. That safes about 4 minutes.
Done in 12 segments.

Chapter 15
First some car driving, and then the final showdown. Once you figured the right timing you easily can blast your way throught the enemies. In the observatory the spawnpoints are at the bottom of the stairs, which lead to the middle.
Done in 4 segments.

Conculsion:
This game might be fun to play, but it's not fun to speedrun.

PS: If you want to contact me, go use the SDA Forum. Look for Cortez.