Released by Lucasfilm Games in 1987, Maniac Mansion puts you in control of the teenaged Dave Miller and two of his friends, as he ventures into the Maniac Mansion and attempts to rescue his girlfriend. This game revolutionised adventure games with its point-and-click interface and humour, and inspired a TV series. 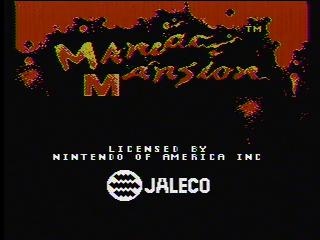 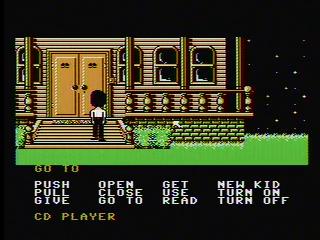 When I first came to SDA, I was shocked to see this game didn't have a run. I played this game a lot growing up as a kid and always loved it. I'd finished my Contra III low % run this summer and I picked this up again. ARC's TAS run blew my mind when I first watched it. I started practicing and found I could duplicate some of the tricks. As time progressed I found out that all of the tricks were possible in real time. After a lot of practice I've got this run to the point where I can feel satisfied with it.

Very special thanks to:

Arc- Your TAS of this game was incredible. You discovered the glitches that made this time possible. Planning a console run of this was tough and I ended up just stealing your route. Well, I didn't completely steal it, I made one minor improvement.
The Nes II - For being more reliable than the NES and for having a surprisingly good controller
The VCR - For helping the NES II deal with not having a composite video output

The SDA team, including Mike, Nate, Flip, Vorpal, mooh, Breakdown
Hurblat - For Contra III support and for being one of the few people that stopped by when I streamed this
bmn - For maintaining w00ty
Kurt - The Brothers Bloom
Scott - For never losing faith

In the proud tradition writing comments that are obscenely long, here you go.

Character Select Screen- I always liked Razor and Bernard when I played this game as a kid. Bernard is...well Bernard. You can see his pocket protector as he walks. Besides, it's canon that he sneaks into the Mansion in the first game right? Razor is easy on the eyes. Seriously though, you get optimum cursor positioning after picking Razor and Bernard. It's just a fun coincidence that they're also my favorite motley crew.

Front gate
If you switch kids while on screen, you don't have to wait for the transition screen. If a kid is walking in a direction and you switch to a new kid, the first kid will continue walking. I quickly move all three characters over this way.

Front porch
I use the get command on the rug. You can use an item that's on screen with another item even if you haven't picked it up yet. I have Bernard use the key on the door. As he unlocks it I immediately have him ring the doorbell and go inside. I then switch to Dave, close the Ed cutscene and bring Dave inside

Second Floor Landing
I have Dave go to the door and then open it. It's a bit slower, but much more practical

Second Floor hall
Going right is a pain in this game. The screen doesn't start scrolling until after your character is almost completely over to the right. I wasn't able to get Dave to the side of the hall without stuttering a bit. You can't just mash the button because that causes lag.

Third Floor Landing
If you give a character the new kid command, your kid can walk past anyone that tries to capture or block you. Normally Green tentacle will require you to give him some food and something to drink. With this glitch you can walk right past him. You can't walk into the next room without getting blocked. I have to switch kids here so I switch to Razor and have her move from the Front Gate to the Front Porch. Weird Ed will be back in his room soon so I
switch back to Dave immediately. After the switch, Dave can walk up the rest of the stairs and to the next room.

Cousin Ted's Room
Dave needs to use the hunk-o-matic machine once in order to be able to open the grate on the front porch and the garage door. I quickly use it and return to the Third Floor Hall. The way the screen moves makes it difficult to open the door. I stutter for a bit on purpose to make it easier.

Dr. Fred's room
I love this room. It's the only room of the house that I've never lost a run in.

Green Tentacle's Room
The game recognizes that Green Tentacle is still on the Third Floor landing so he's not up here. It's an interesting kind of consistency. I grab the yellow key and head back down the hatch

Weird Ed's Room
I head back down the hall and into Weird Ed's room. I get captured quickly enough and switch back to Bernard.

Dungeon
I move Bernard into position to push the brick as Weird Ed brings Dave into the dungeon. The screen movement makes the brick pushing a bit tough, but I switch back to Dave. I quickly move the cursor to the left after sending him out the door

Basement
I instantly pick up the silver key and head out the basement. Going right is a pain and I don't do it nearly as well as the TAS.

Front Hall
A brief stutter, but I make it outside

Front Porch
I don't know why but the game really starts to lag here. It continues after going under the house

Under the House
The lag is really pronounced here, I'm not sure how the TAS avoids it. I stutter for a bit to get the screen to scroll to the right before opening the water valve. I don't know why I was able to get out before the cutscene when the TAS didn't.

Front Porch
I move Dave to the front porch and switch to Razor and steer her to the front door. I wait for a bit with Dave on purpose to give her more time to get closer to the door.

Front Hall
Not much to say, I do a quick door transition to get into the kitchen

Kitchen
I stutter on purpose as I move to the right. I want Edna to chase me. The screen needs to be pretty far to the right for that to happen. I switch to Razor and have her go inside. The cutscene where Purple Tentacle checks the basement is skipped and I immediately switch to Dave who promptly exits the kitchen.

Dining Hall
Going right is a pain and while this doesn't look anywhere near as good as the TAS, it's not bad for real time, trust me

Pantry
This is not an easy room. I can't pull off the optimization of the TAS. I hang for an extra moment on selecting the silver key from the inventory, but it's not too bad.

Pool
Down the ladder and grab the key. I then proceed out the pantry

Front Hall
This is one of the harder parts of the run. I need Razor to push/pull the gargoyle head and Dave to get into the basement. I move Dave to the right, switch to Razor and have the push command ready as the screen is scrolling. I catch it without too much delay. This went pretty solid.

Basement
Not much here, just going left till I hit the door. I can't time it like the TAS does so I do have to get the cursor all the way to the right side to switch to Bernard after telling Dave to go to the far left.

Dungeon
This is one of the harder tricks in the run. I have Bernard push the loose brick and then quickly switch to Dave and get into the dungeon before the door closes. Once Dave is inside I have him move to the left and use the key on the bottom padlock. I'm a bit slow getting the top padlock, but it's not easy. From there I open the door and enter the combination 0000. If you haven't fixed the wiring for the Arcade machine, this is the default combination
for the inner door. The next trick is also pretty tough. I switch to Razor and have her ring the doorbell. I then switch back to Dave and have him and enter the inner lab before the doorbell cutscene. The timer for the pool is still going. If the TAS barely makes it into the lab before the Mansion has a core meltdown, then I make it by the skin of my teeth. Thankfully entering the Outer Lab is enough to disable the meltdown timer.

Outer Lab
The developers probably knew the new kid command was buggy and that it could be used for sequence breaking. They completely disabled the command once you reach the inner lab. Purple Tentacle is a capture character and so he can be frozen if a cutscene appears. By getting into the outer lab quickly, the doorbell cutscene freezes Purple Tentacle and I can enter the inner lab.

Inner Lab
I do my best to get to the next room quicly as the lag is really bad here. I'm a lot slower about getting the card key into the slot than the TAS, but I get through quickly enough. I don't get the Radiation Suit from the locker.

Meteor Room
I throw the switch quickly and boldy charge toward the meteor. Just as I'm about to get obliterated, I'm saved by the lengthy cutscene. Once it finishes, the projectile of death disappears and I grab the meteor and dash toward the garage. I get interrupted briefly by the cutscene where Ed answers the door.

Garage / Car Hole
I have Dave open the garage and then put the meteor in the trunk and turn the key.

Q: Why is your run almost 30 seconds slower than the tool assisted run
A: The biggest reason is that a lot of the commands are difficult to execute while your character is moving. These things include moving Dave to the right and immediately opening the water valve under the house and using the card key in the card lot in the inner lab. The TAS uses some really fancy cursor scrolling and timing to overcome this. I have to stutter or pause a half second in places to avoid losing too much time. Another major reason is
input lag. I issue a few more commands to do the same thing and every time you issue a command you case a bit of lag. It's also tough to make some of the quick door transitions where you open a door and your character goes in immediately after the door is opened. The character goes in the door even before its sprite changes. I do this on some but not all of the doors. The next reason is that I don't get the quick character transitions that the TAS
does. This is where you issue the new kid command and switch kids before the list of kids appear. The timing on that is tricky and hard to do in real time. There aren't any major mistakes in this run, but there are a couple brief moments of hesitation.