The second U.S. installment of the Mario series, released in October 1988, was not the series's actual second game but a reworked "Doki Doki Panic". You can play as any of Mario, Luigi, Toad or the Princess, each of whom have slightly different abilities. Journey through Mario's dream with creatures that would reappear in later, non-imaginary, Mario games. 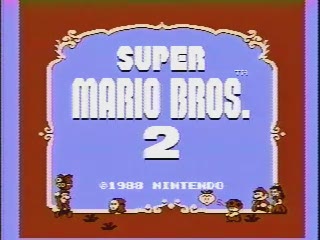 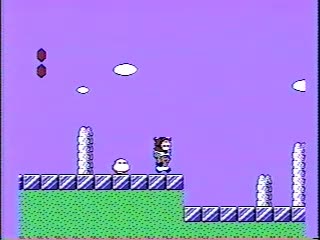 1-2: I didn't get to Birdo quite fast enough, costing 0.8 second.
6-1: Birdo dodged my first throw, which doesn't happen often and disrupted my performance. 3.4 seconds loss.
6-3: At Birdo, I threw the mushroom block too early to effect two hits, but I compensated with the second throw. 1.1 second loss.

Since this is the first "glitched" any% run submitted to SDA, here are some notes about the glitches:

Double-jump (as seen in 1-1, 4-1 and 6-2): run toward an enemy and jump immediately before getting hit. While ascending in midair, you can perform another jump, because the game assumes you're still on the ground.

Vine warp (1-1): it looks like I'm climbing down, but actually I'm climbing up. The falling Shyguy tricks the game into reversing the direction. Because I'm so close to the bottom of the screen, the game treats it as climbing down to the next room.

Fast carpet (1-2): riding the first carpet while holding the second Pidgit results in a much faster carpet ride, especially with Toad (who moves faster while holding an enemy). Doing this trick (which I learned from andrewg) was extremely hard until I devised a more reasonable method.

Illusion item (1-2): this is arguably the hardest single action in the game. Once you exit Subspace (area where you collect mushrooms/coins), you must pick up the vegetable the very instant that the level reappears. The vegetable isn't usable until you carry it into another room; in fact, you can pick up and throw other objects during this time.

In conclusion, this run will likely be impossible to beat without using the illusion item glitch, but can otherwise still be improved. Using extensive emulator research, I determined that 8:26 is possible. Thanks for watching, and feel free to check out youtube.com/cakmusic and twitch.tv/ccaakk . Special thanks to SMB2 speedrunners Andrew Gardikis, Andreas Svensson, Jeff Sledge, Tommy Montgomery, Scott Kessler, and Kevin Juang (sorry if I missed anyone). Thanks also to the speedrunning community at large and my friends/family who have been supportive of this hobby.

Timed at 21:59.8 from VHS and 21:56.2 according to WSplit, this run improves tmont's previous SDA time by over 4 and a half minutes, while also being a vast improvement on the video quality. Many months of on/off planning and practice went into this, including save-state practice on Power Pak (a first for any of my runs). However, as always a real SMB2 cartridge was used for the actual run. Thanks to all SMB2 speedrunners, friends/family, my awesome girlfriend for being supportive, and to my online supporters. Also thanks to the band Sparks and their album "Kimono My House", which I was listening to while playing.

The fastest possible time using current strats would be somewhere around 20:56, but this includes really ridiculous stuff such as using Toad on the vines in 5-2. My fastest practical IL's come out to about 21:07, so there is still definite room for improvement. However, so many things went right in this run that I think it will be a very hard time to beat.

So it's finally done! My speedrun of the Allstars Version of SMB2 has come to an end.

I would like to thank Radix for hosting and giving me the best leisure-time activity i've ever had, mikwuyma for the info about submission and anyone ever attempting a run of this game for my motivation.

Oh yeah ... almost forgot Santa Claus! He gave me the DVD-HDD-Recorder, which finally allowed me to record my run.

*NOTE*: I use the invulnerability glitch at Birdo really often. It is mainly, that you can't be hurt while picking up something, but you will see ...

*NOTE*: Character selection is always by the same pattern: Toad, if there are no high jumps; Luigi, if there are high jumps (most obviously); and princess in 6-1 because i was to lazy to find a way with Toad or Luigi.

Yeah ... thats all about it. I think i will try to beat this game again sometime because of the horrible playing in 7-2 (yeah yeah ... the up to the roof thingie) but for now im pretty satisfied with it.

I thank you for watching/reading and hope you have enjoyed watching as much as i had recording this.

Oh ... i almost forgot. Sorry about my english, it's partly learned in school, but most of it learned from playing Roleplaying Games in english ...