Developed by Nintendo for the Wii and released in November 2007, Super Mario Galaxy is yet another increment in the 'bigger and better' convention of the Mario franchise. This time, Mario embarks on an interplanetary quest to save Peach from Bowser. The only surprising word in that sentence was a change major enough for the game to receive universal critical acclaim. 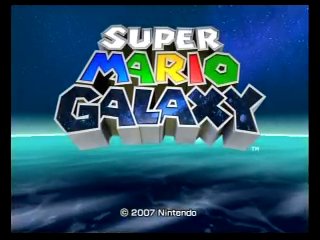 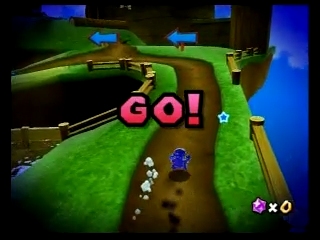 I'd like to thank the following for help and inspiration:

For general info on game mechanics and route planning considerations, I suggest reading the SDA strategy wiki. I've recently re-organized it, so hopefully relevant information is easy to find.

Along with the considerations outlined in the strategy wiki, I did a lot of playing, testing, and YouTube hunting to see how long each star took. If there was a star that didn't already have a good video, I would learn the level myself and estimate the star's length based on that.

Overall, I checked many more than 61 stars. During this phase, I didn't spend too much time on any one level, so my time estimates were sometimes over 10 seconds slower than what I ended up getting in the actual speedrun. Still, I think the estimates served their purpose pretty well, and I think my route turned out to be a sound one.

I also timed a bunch of observatory routes, cutscenes, and miscellaneous stuff like that, since those are also important when route planning.

I'll go over some of the specific route decisions that I made:

I had considered the possibility of not doing any of the Luigi stars, since I was skeptical of the overhead these stars would incur. This would include: being sent out of the Kitchen back to Rosalina so she can tell you Luigi's at the Garage, talking to Luigi at the Garage, receiving Luigi's letters, and making at least one extra trip to the Terrace. However, Luigi on the Roof and Luigi in the Honeyhive Kingdom are very short stars, and I can skip the beginning cutscenes in all three Luigi stars because I'm revisiting previous star scenarios. This makes the Luigi stars easily worth it.

2. Unlocking the Garden (last observatory dome) or not unlocking it.

Dreadnought and Melty Molten stars are long and not worth it, but Deep Dark has a good amount of timesavers that make it close to worthwhile. For example, Bubble Blastoff (star 2) can be done in around 1 minute (from gaining control of Luigi to grabbing the star). However, the Deep Dark stars aren't quite short enough to justify the following: (1) completing Bowser Jr.'s Lava Reactor, a slightly long star that's almost 2 minutes; (2) going through the long cutscene after unlocking the Garden; and (3) making the long journey up to the Garden, which I timed to be 35 seconds, at best, from Rosalina. So I chose not to unlock the Garden.

3. Doing Trial Galaxies or not.

This would be mainly for Rolling Gizmo Galaxy and Loopdeeswoop Galaxy, since the Bubble Blast Galaxy is long. Rolling Gizmo and Loopdeeswoop are somewhat short - probably around the 1:10 range. The overhead incurred would be: (1) completing Dusty Dune 1 and 7 to get the last green star - both of these stars take nearly 2 minutes; (2) getting sent back to the Observatory to get an explanation on the green launch star; and (3) using the green launch star and talking to a Luma to get to each one of the Trial Galaxies. I found this to be not worth it, since there are more accessible alternatives for other reasonably short stars.

4. Just picking stars from a pool of potential stars.

In the end, I boiled it down to picking 10 of the following 17 stars:

That should give an idea of how the route planning went for this run.

For individual stars, I'm going to go into a fair bit of detail to explain things, so feel free to just watch the run and check the notes on a particular level if you're wondering about something.

About the "You increased your Star Bit count" dialog: When you've collected less than about 30-40 star bits in a level, it's faster to let the star bits count down all the way before pressing A. If you press A sooner, you'll cancel the countdown, but it will make the dialog stay onscreen for an extra ~2/3rds of a second. I didn't take this into account until Segment 3, so I lost a fraction of a second after Gateway by canceling the countdown.

I could've rapidly tapped B instead of holding B to feed Polari (the black Luma) more quickly.

5. Honeyhive 2 - Trouble on the Tower

13. Rolling Green - Rolling in the Clouds

21. Ghostly 1 - Luigi and the Haunted Mansion

25. Bubble Breeze - Through the Poison Swamp

Matter Splatter Mansion before Airship Armada could have potentially saved time, though. The reason is that Dusty Dune is unlocked at 29 stars. By unlocking the Bedroom with 28 stars, I have to see the "You've discovered a new galaxy!" indicator once for Gusty Garden and Freezeflame, and once for Dusty Dune later. If I'd gotten Matter Splatter Mansion here so that Airship Armada was star 29, then I would see the indicator only once for GG, FF, and DD all together.

I'm making two trips to the Bedroom for 12 stars, so that's 6 stars per Bedroom segment. The second trip includes Bowser's Dark Matter Plant, so to make that segment easier, I tried to pick some of the other harder stars for this first Bedroom segment.

Back to the Kitchen, because Buoy Base unlocked at 30 stars.

It's definitely been at least 5 stars since the last find-Luigi mission (Good Egg), so I'm off to the Fountain for the next Luigi star, as well as a couple of other Fountain stars that I didn't get before.

38. Battlerock 7 - Luigi under the Saucer

Other than ease of optimization, there's no reason to split up the Engine Room into multiple segments. I figured I'd first try and do my best to single-segment through all 12 planned stars in the Engine Room. Getting to the Engine Room takes 20 seconds, so if I could single-segment the Engine Room with less than 20 seconds of mistakes, then I wouldn't have to split it up into multiple segments. After a lot of practice, followed by surprisingly few segment attempts, I realized this feat would be possible. It took another solid week of attempts to actually get the segment I wanted, but the result is probably the highlight of this run.

Halfway through the segment!

Since the next two stars are in totally different places of the Observatory, I wouldn't really gain anything by combining them into one segment. In fact, I found that by SDA timing, it's faster to do them in separate segments.

61. The Fate of the Universe

Hope you enjoy the run. Feel free to ask about anything that I didn't cover. You can ask questions on the SDA forum, or at my segment videos on YouTube (playlist here).