Released by Software Toolworks, Mario Is Missing illustrates full well why Luigi doesn't star in many games. In his first outing at center stage, you get a game that teaches you about geography. Yep, that's what kids want in their Super Nintendo titles. 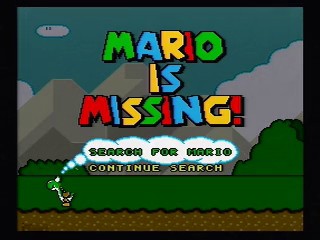 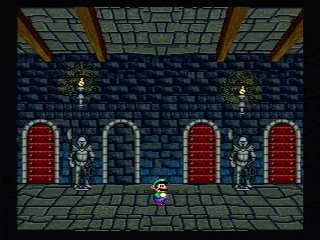 Good afternoon! If it's not afternoon as you're reading this, you might want to come back later.

It seems I decided to run Mario is Missing! I don't have a good recollection of why, but here it is. I think I was hoping that it would be a quick game to run, given how easy it is to play casually, but it became more of a time sink than I expected. I will do my best to explain where the time went, and hopefully give you a better appreciation for how much can be done in a speedrun of an apparently trivial game.

If you aren't familiar with Mario is Missing!, the idea is that Bowser has invaded the real world and is sending his Koopas out to steal pieces of famous landmarks. Using the money raised from selling the stolen artifacts, he plans to buy a vast quantity of mail-order hair dryers and melt the Antarctic ice cap (seriously). Mario and Luigi arrive at Bowser's castle to stop the treachery, but Mario is captured, so Luigi has to recover all of the stolen items himself, and maybe rescue Mario while he's at it.

At the center of Bower's crime wave is a set of magic doors that lead from his castle to various cities. The goal of the game is to travel to each city, stomp the Koopas that apparently couldn't be bothered to escape with their gains, and return the artifacts to the information booths near the landmarks from which they were taken. At each information booth, Luigi must take a brief quiz to prove, for example, that he is returning the real King Kong. After returning everything — and summoning Yoshi to the city to scare away the Pokey guarding the exit — Luigi can leave and lock the door behind him. Once every door on a floor has been locked, Luigi can fight the Koopa Kid guarding the way to the next floor of the castle. Mario and Bowser await after the third floor is cleared.

In the SNES version, the game encourages exploration by spawning several Koopas at random locations in each city, with no way to tell which Koopas are carrying artifacts other than stomping them. The key to speedrunning the game is knowing that the spawns aren't very random. In fact, the only source of randomness is the order in which Luigi enters the cities. Since the Koopas move on a citywide timer once they've spawned, as long as you have an idea of how fast you can get around the stage, it's easy to predict where the Koopas with artifacts will be.

To plan my run, I reverse-engineered the Koopa spawn algorithm and wrote a program to estimate which city order would give me the fastest route. I know my program oversimplifies some aspects of the game, but I think the route is pretty good. I wasn't quite able to test the other 1.7 million-ish orders in which the cities can be visited, but I did try a route where I visited the cities left-to-right and it looked to be about a minute slower due to inconvenient Koopa spawns, so I think the program got me farther than I would have if I'd planned by playing the game a lot. In any case, the research and programming that went into the route generator accounted for a lot of the time I put into this game, to the point where I was pretty much committed to finishing the run once I had the program working.

The next-most important part of running Mario is Missing! is memorizing the answers to the curators' questions at the information booths. This seems obvious, but there's a bit more to it than one might expect. The curators are supposed to choose random questions, to encourage the player to learn the provided material. However, for some reason, the first floor isn't randomized as long as you drop off the artifacts in the same order. Because of this, I was able to get through the first floor by giving the controller inputs for each booth from memory. I think it was a lot faster than reading, and I hope it's noticeable in the video. I lost a lot of attempts to missed inputs.

After the first floor, the questions start getting mixed up. I don't know what drives the randomness, but I saw enough variation during my attempts that I didn't think I could safely memorize inputs for the next two floors. However, there's still some planning that can be done beyond learning the answers. A few of the curators only ask two questions and always ask them in the same order. The inputs for those information booths are okay to memorize — see if you can tell which booths they are. The other curators each have a pool of three questions, but they only use three of the six possible orders in which the questions can be asked, and there's always one first question that guarantees a specific second question. Also, in some cases, the questions that could be asked first and/or second have their answers at the same place in the menu. So, there are still cases where the answers can be predicted and therefore given fairly quickly.

I know my reading for the remaining questions isn't the fastest, but I hope it doesn't look too bad. I sometimes get lulled into expecting certain questions and then don't get them. I might also be bad at reading. Anyway, time to change the subject.

The third place where I save significant time versus a typical playthrough is in the boss fights. Luigi can't take damage, so the developers tried to add challenge by making the bosses frustrating to hit. There is a trick that can be used to keep the bosses under control, however. Here's a simplified summary of the AI:

I've seen bosses change direction in other circumstances, so I know there's more to it, but I haven't researched much because the above is enough to form a pretty good strategy. The bosses run one pixel per frame faster than Luigi. Because of this, if a boss passes by Luigi while both are running in the same direction, the boss will eventually hit the same pixel as Luigi and turn around. You can use this to pin a boss against the far right wall, as I do in this run. The important things are to make sure you're going left when the boss reaches you and to avoid getting so close to the wall that the countdown prevents the boss from turning around.

There are a couple more things worth knowing about the boss fights. One is that while the bosses have different sprites, they all have the same behavior, as far as I can tell, and they definitely all take six hits. The other is that after Luigi hits a boss, he bounces up to about the same height as the apex of his jump, so if you get in a sufficiently low jump, it is possible to hit a boss multiple times. I occasionally landed double-hits during attempts, though it didn't happen often enough for me to make it a goal in my run. In this run, I got no double-hits, but I think I only missed one jump, which is better than usual. I once got a triple-hit on console. It's too bad that attempt didn't go anywhere.

In addition to the above, there are a bunch of little things that can be done to save time or make the run easier. Since I don't think there's much information about running this game online, I'll list however many I can remember here:

There are also a few things you should watch out for when running this game because the apparently small amounts of time they cost can add up:

I will pass on giving a level-by-level breakdown because the run is just an application of the above information to the specific map and Koopa spawns for each city. There were some mistakes that I could try to explain, but I don't think I did anything egregious other than maybe missing the pipe in Tokyo. There's actually more time to be saved by playing tighter and not hesitating as much in the menus than there is in cutting out obvious mistakes, and the hesitation is spread out across the whole run. I might come back and clean up some of the slop if I ever find new route improvements to motivate me. In the meantime, though... I'd rather play some other games. I hope you find the run enjoyable even if it isn't completely optimized and the game is terrible. <_<