Released in November of 2003, Mario Kart: Double Dash!! is the fourth installment of the popular Mario Kart series. Although all the major aspects needed to stay true to the series are present, this game still strayed away from the from the traditional Mario Kart recipe by enabling the player to chose between different karts, disabling their jump actions and making powerslides an ever bigger part of the game. 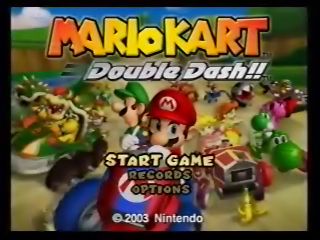 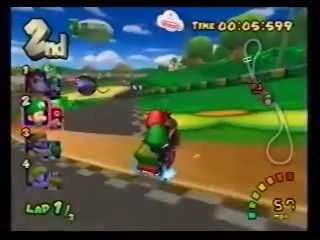 Note: The only cup allowed is the All Cup Tour because it covers all of the cups.

Since Mario Kart Double Dash is a game that has its own ranking site (for time trials) [www.mariokart64.com/mkdd], so I'm not going to discuss the basic strategies of each level too much. However, you can't really compare results from time trials to results from gp mode for the obvious reason: randomness! I don't know how many times I felt like giving up on this run because (bad) luck is so heavily present. Even if you get your strategy down perfectly, you can get a lightning/blue shell/red shell thrown your way at anytime.

Overall, I'm very pleased with this run. It's not a flawless run but I'll go ahead and say it: this was a very lucky run. I was able to go through more tracks than usual without getting touched. There is really only Wario Colosseum and Dino Dino Jungle than show how badly those shells can screw you up.

I'll discuss briefly about my general strategy. I don't know if it's true or not, but I personally find that King Boo and Petey Piranha throw a little red shells than the others so I have decided not to unlock them for this run. The Barrel Train is the best kart and to pick it you have to choose two small characters. I chose Baby Mario and Baby Luigi. When you're in first place, the two turtles, Diddy Kong and Baby Bowser can get their special. I find that the turtles have special items that I find pretty distracting, Diddy Kong's special item is big banana which is not good on the second and third drive by's and finally, Baby Bowser has a huge shell which can cause more harm than good because it stays on the track for a long time.

I hope this run is as enjoyable to watch as it was frustrating to make.