Released in March 1996, Mario's first RPG starts out like most other Mario games: Mario goes to rescue the kidnapped Princess. After a short confrontation with Bowser though, a sword comes crashing into Bowser's keep and sets the three of them flying in different directions. Mario travels around the world, teams up with Bowser and the Princess and others in a quest to restore the 'Star Road' where wishes are granted. 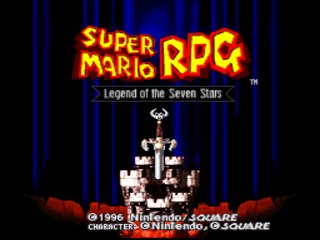 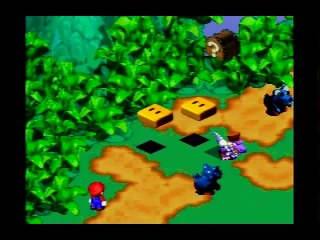 Note: This run has a reset to manipulate RNG. I will explain later.
I've been running this game for a long time and I got really decent run finally. There are still some mistakes and bad luck but it's really good overall.

・Bowser's Keep
The more using Jump move in fight, The more stronger it becomes. This jump power grinding is necessary and it saves time in many battles. +1 power per 2 Jump usage if anyone doesn't know.

Only 2 Terrapins punches here, which is really good.

・Mario's Pad
Using save skips Toad's tutorial. Not much to say here.

・Mushroom Way
I need 12 FP before 1st Belome. This flower doesn't cost time as much as other flowers.

Hammer Bros. (50 HP x2)
He uses Valor Up (2x defence) after you kill either of him so you will take more time if you kill 1 as soon as possible.
2 Hammer Time here isn't good sadly.

Get 1 Frog Coin from Castle. (Hidden)

・Bandit's Way
I didn't get platform coins because another coins will spawn and it takes seconds, I don't need them.
I'm getting many items to buy bombs at seaside town. I obtained KeroKeroCola here.

I killed 17 k-9s but 10 is minimal amount you need. But in case I get bad luck later, I took safer. Also, I didn't try k-9 jump, which you can hit the flower chest when jump on him with minimal time loss. I was inconsistent at this trick.

・Mushroom Kingdom
I performed mack skip here. It's hard to explain it with text. But there is good tutorial video. https://www.youtube.com/watch?v=WhjNbMW7P10

It will result to skip boss entirely and to proceed game normally. Boss fight takes 4 minutes at least.

He didn't kill mario in 2nd turn, not bad. I needed coins and Jump power here.
I got a flower from same room as Pandorite. (You can cut this flower if you get K-9 jump flower and it's 4 seconds faster).
Killed 8 rats with star. 7 is fine if you killed 12+ K-9s in Bandit's Way.
I had boo encount by mistake, it cost 16 seconds.

Belome (HP 500)
- He starts using S'crow Funk when his HP is below 300.
- He eats mallow when he isn't scarecrow'd or slept in every 3 turns. He spits out when damaged twice.
- He's weak to Thunder.

He put Sleep Sause on Mario in 2nd turns and he kept doing no physical attack, bad fight.

・Midas River
Get 60 coins exactly to cut one text plus to get 5 frog coins.

・Rose Town
Enter shop through chimney and get flower.
Buy:
2 Wake Up Pins
Get a Flog Coin from upper left of the room. (Hidden)
Go to elevated house and get frog coin (above bed, Hidden) and 2 flowers. (15 FP is needed for Bowyer)
Select 2nd option in inn conversation. It's faster than 1st option.

I could use Energizer since I freebie'd it in Bowyer, Croco didn't kill anyone and he dropped the Box. Extremely good.

I killed 6 Bob-ombs and 1 Flame ball. Flame guy won't appear sometimes and you may be going to miss level 5 mario if you didn't kill enough enemies from 2 previous stars.

Thanks to Flower Box, I can skip 150 coins chest and secret Booster Pass room. But I collected 130 coins out of 150 for buying extra 1 Ice bomb.

Minecart is ok run in spite of 1 crash.

・Booster Tower
Get 9 Frog Coins, 1 Flower Tab and Goody Bag.
I skipped switch as I said in Moliville part.
Do not fail curtain minigame and automatically receive Amulet.

Terrorize accuracy is 85%. If it misses either or both, it's huge time loss. Mario on Echofinder is bad too. I didn't get neither, good.

・Marrymore
Peach Kiss or not. (0~2 candles when you collect all her belongs)

I took some times due to that bad Sandstorm at the end but not bad overall.

・Mushroom's Kingdom It's about 3 seconds faster than getting it right after Mack.
Get Cricket Pie here.
I gave one Toad NPC back his wallet for Flower Tab and 1 Frog coins. It's fastest way to maintain frog coin number with skipping Booster Pass revisit.
Re-enter castle can cut waiting peach lands, which saves about 1.2 seconds.

・Tadpole Pond
Give Frogfucius Cricket Pie and talk him again.
I didn't go Booster Pass after this because I got Flower Box from Croco.

I was going to buy 9 Ice but I sold 2 Flower Boxs at once and lost about 50 seconds. So I had to buy Fire Bomb instead Ice but it's not huge time loss.

・Sea
New technique Swap glitch is here: http://pastebin.com/d817bvU3
I used it for Peach Shocker. This is really useful in some battles.

Left and Right Tentacles, King Calamari (HP 260, 200 and 820)
- They all are weak to fire.
- Tentacle will throw you to off screen and make your ally fear when you can't past a phase in 3 turns.

Get KeroKeroCola and Safety Ring. Ring is one of broken accessory, which prevents all bad status, elemental spell damage and mortal brow. Also, it gives +5 speed, defence and magic defence.

Bandana Reds (HP 120)
- He is weak to fire and thunder.
- He will run away when just one survive.

Just throw 2 Fire Bombs and got no freebie. classic.

Johnny & Bandana Blue (HP 820 / 150)
- Blue has same weakness as Red
- Johnny uses Get Tough when his HP is below 400.
- He will 1vs1 mario when his turn comes and these following conditions are achieved.
1. Mario is alive.
2. No Bandana Blues are alive.
3. Johnny used Get Tough.

I was lucky I had extra Fire Bomb to kill those Bandana Blues. If I couldn't kill Johnny with Super Jump, EXP route will be broken and it's way slower. I'm glad I got 1st try 100.

・Seaside Town
Yaridvich (HP 1500)
- He is weak to thunder.
- He always uses Water Blast in 1st turn and right after he releases Mirage Attack.

2nd Water Blast is bad but I could kill him befofe Mirage Attack and got 1 Ice Bomb freebie. It's not bad.

No need death abuse anymore. Death abuse is the EXP grind trick. When you die at battle, you'll be sent back to final save. It resets everything but EXP so you can save right before star and use/die to farm EXP as long as you want. This route can cut it because of getting Exp. booster early and it saves much time.
Star section went well as I expected.

If I drop Super Jump, he will make clone and it will break EXP route especially he eats Geno and of course, it huge time loss. I'm glad I didn't fail.

・Monstro Town
Talk to Melody Star and then talk to Monstermama.
Get Super Suit and Attack Scarf.

Back to Land's End and get Troopa Pin from Sky Troopa minigame.

Bad damage roll, 1 counter and long enemy attack animation, it's not good but I got 1 Ice Bomb freebie.

Get Feather.
I got sharman encounter I should've jumped but I still had to chance to hit. I hate him.

Average fight, I could've killed without Bad Mushroom but it's rare.

Vallentina
In old route, 4 turn kill is possible but not for this route due to lower level. (It's still possible but all good damage roll is required). Vallentina used spells every time except 1st, her battle phase didn't go well.

Corkpedite
No data because I'm lazy. Just do Geno Blast.

Went really well, I was going to use Ultra Jump on Zombone if Geno couldn't attack twice.

I could use both Ice and Fire Bombs, good. Ultra Jump RNG was bad though.

・Nimbus Land
There is bowser door manipulation here but I didn't use because it's harder than Mario's Pad manipulation and I really didn't want to kill this run by that. You can see this pic how to do: http://i.imgur.com/M9Wmtby.png (uses audio cue) or http://www.twitch.tv/theclaude/v/4837000 (uses visual cue)

Both are only for Japanese, if you want to try it on English, see this pic: http://i.imgur.com/AiDWNSf.png

・Bowser's Keep
I went back to Mario's Pad to perform RNG manipulation. RNG value is changing in every single frames except during loading or you're in overworld. Bowser's doors use this value, and it's initialized by reset. So if you reset the game after save and exit Mario's Pad as soon as possible you can, You'll get same value every time and can predict which doors are Battle. About 13 seconds slower than Nimbus Land but Pad manipulation is really easy and you can do it on English version too.

No mistakes in Door part, It's perfect if I got KeroKeroCola freebie in Yaridvich.

Magikoopa (HP 1600)
- He summons monster in 2 turns. He will summon again after you beat monster 2 turns later.

Boomer (HP 2000)
- He has great Attack/Defend status when red, great M.Atk/M.Def when blue. In contrast, red has really weak M.Atk/M.Def and blue does weak Attack/Defend. He changes his body in 3 turns.
- He will do counter attack by 1/3 chance.

Killing eye takes Exor's invincible off completely. So you can use Geno Whirl on him.

Fear Roulette on Peach is worst thing ever in this fight. I lost about 35 seconds here.

Machine Made (Yaridvich, HP 800)
- He will use Multiplier! since 2nd turns. He will be back to normal when you kill all of drill bits.
- He drops Rock Candy by 25%

Super Jump on Earthlink is usually faster and safer than just attack on Mad Adder since link won't use spell. I drop Super Jump often here, It's good not to drop.

Get a Rock Candy from Toad.

I could spend multiple of Rock Candy and Ice Bombs. This is really great fight. I had to use shocker otherwise but it's long animation.

I didn't kill Smithy 1 with Super Jump for 2nd phase. Kill with Rock Candy is ideal.
I got unnecessary Rock Candy freebie and did 1 unnecessary Super Jump. I missed Mario's damage output so I took safe bet.

- Body can't do attacks when his HP is 0, He will reveive 3 turns later.

Double 100 Super Jump is really good especially I was on new record pace, so much pressure. Peach and Geno were killed during Tank head but I got lucky head after this. I believe I only lost a few seconds due to being killed.