The fifth installment in the Mario Tennis series, and the second on a handheld, was released in North America on December 2005. Power Tour welcomes back Game Boy Color version's protagonists in supporting roles, and gives you two new characters to play as: Clay and Ace. After mysterious masked players appear and defeat Alex in a match, Clay and Ace train to try and win the Island Open to find out just who those masked players were. Power Shots were meant to add some more spice to game, but failed for a variety of reasons. 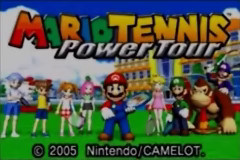 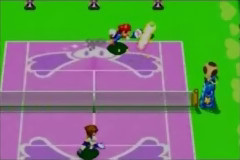 This is my second time running this game, and to be honest, the last run was utter crap. I felt that when I ran the last run, and only kept it and eventually submitted it only because it was well over 20 seconds faster than what I was expecting. Now, I've taken two and a half minutes off that time, beating my original goal by over a minute, which is huge in a game like this, where luck manipulation is everything.

Before I begin with the more indepth comments, I want to thank a couple people:

First, my super awesome brother Josh for letting me use his game (yes, he made me put that)
Second, I want to thank Mike for helping me with the many questions I had about the game
Finally, the rest of the SDA staff for making SDA a great place

To begin with, I use Clay because he starts out with higher Power, Serve and Stroke stats. I then try and max Power ASAP, but the need for control forces me to put pretty much every other point in control so I can win rallies faster. Without control, shots end up in the middle of the court. I think the need for Power is self explanitory.

For my secondary stats, I used to max serve, but then realized I was wasting the 9 points I needed to go from almost max to max, because it barely did anything. As a result, I get it close to max, then start levelling stroke. Topspin (my shot of choice due to faster movement) levels on its own, and my power makes up for the lack of volley points.

Haha, you have to watch me delete my files! I keep the character name Clay for simplicity's sake. Righthandedness is what I'm used to, so I keep it at that. Intro is so boring, complete waste of six minutes.

Junior Class
The Junior Class is probably the hardest class in the game due to your crappy stats. I grab the 1-UP Mushroom to enhance my power/serve so aces come easier.

Actually a very good start, mainly due to those 2 return winners. Sophia has one serve that you can get a return winner on, so I'm very fortunate to have it happen twice. Also got 2 smash winners. This is enough experience to get me to level 4, which completely botches my levelling strat. Thankfully, I fix this against Mason.

Mason went very well. Every rally was done quickly, and I got some comedy relief on his one serve (the one I got the return winner on). 8 aces, 1 smasher, 1 returner.

I hate Sasha, because she loves to lob it over my head and end a run. She didn't here because I didn't give her a chance to. Sasha is very easy to return ace (I got 5 in one match on a previous attempt), but I only get two here, along with two smash winners and 8 aces. This more than made up for the rally in the middle there.

He got my one serve, but that happens 90% of the time, unfortunetely. I did get a very strong 3 smash winners and a return winner. Overall, pretty good, considering none of the rallies were particularly long.

Senior Class has the slowest court in the game, clay sucks for speedrunning. I have to get a Power Shot beforehand, which I don't even bother equipping because it's a save shot.
Acidentally lost 2 seconds by talking to Kate again. >_>

Gary was alright. Only one very long rally and a full 8 aces, but only 2 smash winners and no return winners. Missing the smash looks bad, but the drop shot scored, so I just lost a couple exp there, nothing major.

I almost lost the run twice here. Having to dive for a ball was pretty bad, but I'm pretty sure the second smash should have been over my head. Anyway, 7 aces, 3 returners, 4 smashes makes this Kyoko match much better than the last one (where I lost a point).

Probably could have gone a bit faster, but I'm happy with it. He saves twice, returns my first serve (computers have a very nasty habit of doing this), and returns most of my returns. However, I got a return winner and none of the rallys were very long, so this is good.

Yes, walking around Emi is faster.

Gah. She used her offensive power shot FOUR times, and there were a couple long rallies in there as well. She also returned two of my serves, but gave up four return winners. Seeing her miss with her defensive shot felt very good, however. Overall, quite average.

And so we go from the worst court to the best court - Composite. The court is fast as hell, making aces and return winners much easier to get.

Paula is so annoying to play against. She uses her power shot three times, meaning three long rallies due to the knockback of her PS. I get six aces and a return winner though, so overall, it's average.

Tori is an awful player, and it shows. She's hard to ace (I only got 5 aces), sure, but I got 4 return winners against her. I did get in one long rally after I failed to smash about 4 times (resulting in a defensive PS), but finished the rally up with a smasher. Overall, Tori was a great rebound from Paula.

I decided to start using the crosscourt slice a match early, and I got two return winners as thanks. One long rally caused by his defensive power shot, but I got seven aces and a smash winner, so Whisker just added to the good rebound from Paula, and gives me some good confidence going into the Island Open.

I skip Elroy to save time, then see another long cutscene. Welcome to the Island Open!

After the annoyingly long cutscenes, I finally get to play some more tennis. The Island Open is the easiest place to play by far, but also introduces 5 set games, meaning I now have 12 opportunities for aces as opposed to just 8. This place has way too much running. >_>

At this point, I can start to rack up return winners by hitting every serve back with a crosscourt slice.

Sass is slow as hell, but he's decently hard to get return winner on. I get 11 aces and seven returners, but it still bugs me that he managed to use his defensive PS twice, both times because I was rushing and not thinking straight.

Elroy is the hardest match in the run, because he has amazing Power Shots, many good stats, and he looks ugly, so I miss shots because I'm trying to look away when he returns it. The match was fine, Elroy's stats make it hard to ace and get return winners, even with Mr. Crosscourt Slice. Sure, one long rally because of the offensive PS, but 8 aces and 5 returners isn't that bad.

This kid's got mad curve, which makes for some interesting shots. To be honest, Willy's easy though, his curve is all he has. He does have one serve that can ace, thankfully he doesn't use it here. His power shot's alright, but I try to not let him use it, which he doesn't. 8 aces, 10 return winners, including one on championship point. What a nice way to close out the Open, and part 1 of this run.

Another cutscene, which includes Ace crying like the four-year old girl we all know she is. Moving along. I run to Peach Dome, another cutscene, and we can finally get playing again.

The Peach Tournament is easy because your stats are so pumped. The court's decent too, it doesn't slow anything down.

Peach is one lucky gal. I have set point, her return nicks the net, and I miss it, unfortunetely. That's the only point I give up in this entire run, and it's a one in a million shot. And then, later, she uses her defensive shot! Sure, it gives me a smash, but it kind of pisses me off. Oh well. 8 aces, 6 returners.

Bowser has a nasty habit of returning you slice serve, and seeing as there is no other alternative, you gotta go with it and hope for the best. He returns it four time, so I get seven aces (thanks first serve return crap). I also get 10 aces, but 11 would have been doable had I not tried that one line shot. Overall, very typical for Bowser.

So, that's that, I hope you enjoyed watching it. Runs of this game in the future? I really hate doubles, so I might do a Technical run in the future. For now, I'm going to focus on getting my Twilight Princess 100% done. There is another run I'm currently route testing right now that I might run later. The game? It's a popular GBA game, but it isn't Minish Cap.

Thanks for watching again, and hopefully you'll be watching some of my other runs in the future.