Originally released in the arcade in 1995 on the CPS-2 arcade system, it was later ported to the Sega Saturn and PlayStation in late 1997. It features many superheroes and supervillains from the Marvel Comics line, including Wolverine, Hulk and Doctor Doom. The game is loosely based on the Infinity Gauntlet storyline, with the heroes and villains battling each other for the Infinity Gems. The main antagonist is Thanos, who steals whatever Gems had been collected and uses them against the player. 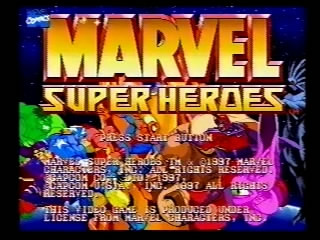 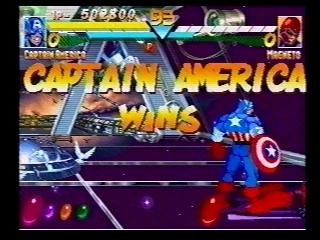 So I was in between runs and couldn't find a game that really stood out to me. Then the idea of Marvel Super Heroes Gamma Crushed me in the head. If you're any kind of a comic book fan, you need to read the series the game is based on as it's one of the best. But jut doing a single run of this game wasn't enough. I'm familiar enough with it that I had to do all twelve characters, yes, that includes Doom and Thanos. So as much as I love platforming, in the arcade, fighting games were always my thing. In addition, I make my home in the "Older Consoles" arena, so this game gets the job done on multiple fronts. Win. These runs are my ode to the title that really paved the way for us to have games like MSH vs SF and Marvel vs Capcom 2.

Also, before starting, I would like to say thank you to all SDA staff. Things seem to have been really picking up lately with the sheer number of runs coming in and you guys have all been epic in running things. Thank you all very much. And a big thank you to my wife Carmen, who put up with rage, Olympic style controller throwing and profanity the likes of which haven't been seen and heard in our home since I ran Super Mario Kart.

I'll begin with some general notes. The first and obvious thing was what to do about the gems. The easy choice is the Power gem. I toyed around with the Space gem while running Juggernaut and Magneto for the invincibility and Magnetic shield, respectively. However, it didn't make things faster then slamming on the computer with the strength. Each run, I required that the Power gem come from the first or second fight. Beyond that there were too many fights without it and cycling between more than three gems is hell in the one second you have before the fight begins. More than half of my attempts were ruined before starting because of this expectation. The exceptions to the Power gem are Captain America and Juggernaut. The Captain has some weird lag with the Power gem activated and messes with his fierce shield strike, so I was actually able to get a faster time without it and could not beat the submitted run with it since doing this series of runs. As for Juggernaut, that beastly man is, one: Powerful enough without it and two: You will perform the Earthquake attack instead of activating the Power gem at least a couple of times per run as both moves require the HCB motion. And that is a run killer in and of itself. Hours were spent on each character to ensure the runs submitted were the fastest I could attain. And I'll apologize now for not having massive combos or Infinity finishes as those things truly are the highlight of this game.

The next items of note are fighting against Doom and Thanos. Doctor Doom is a blocking, chipping, time wasting, flying around jackass and probably caused more resets than any other single character. Keeping him grounded and getting a good fight is a thing of absolute beauty as I'm sure anybody familiar with this game can concur. And then there's Thanos. While he can be as bad as Doom, he is slightly more cooperative. The real problem lies in the Power, or lack thereof. As Thanos steals the gems from you, the fight mechanics are altered. The problem is people like Wolverine and Spider Man just can't cause enough damage to be truly effective. So I ask for a little understanding in that regard. Thanos is the one person who will not just ruin your run, but actually beat you down, so the fight needs to be hot.

Iron Man
Looking at this again, I pretty much obliterated the game with good 'ole Tony.

Thanos
Main strat here is to combo into the fierce hit. This usually works, but had a couple mess ups. Captain starts off with a bit of fighting back, he needs to go to sleep. I still can't believe Hulk cleared that sun... Following that, I pimp slap my way through the rest. Thanos should have fallen at the end to my super, oh well.

Juggernaut
With this beast, it's all power. Fierce punch is 99% of what's happening here. While smashing my way to victory, I do get really lucky landing most of those Juggernaut punches. Wolverine in particular gets punished. Magneto gets away from me, which is surprising as he was one the characters who was almost always cooperative.

Hulk
Moderate use of the Gamma Charge can be real good or real bad. It works here. Then it's on to Jugg style Fierce smashin'. Spidey puts up a good fight however. This is also one of my best Doom fights. The kung-fu kick to Thanos' face is still one of my favorite moments.

Psylocke
Because of her speed, Psylocke is one of the characters I actually combo a lot with. Consequently, I think she has one of the best looking runs. Her triple form from the power gem makes it super easy tp land a strike and chain air combos back to back. Did you catch my junk-punch to Magneto?

Dr. Doom
Doom was the hardest to plan. His attacks aren't built for speed. I came up with a ground combo, but chaining the hits is pretty precise. That's why you'll see some misses or that stupid air gun. I toggled too far on Psylocke and got the Time gem. It helps with the speed up, but still. If I hadn't had at least a 90 round, I would have reset. And I must say, Doom has the most gangster win pose ever. He materializes his crew and sips on Dom while your ass is knocked out on the floor.

Captain America
You and the Cap'n, make it happen. Other than Wolverine running and blocking like a scared turtle, this run was very nice. Some nice combos as well.

Blackheart
Yes, that is the fastest method to KO that I could find. It leaves the opponent open to repeated lifts to air combo. Blackheart has some cool moves, but nothing remotely quick. Spamming this small combo is it. I mean, you can't even dash with the stupid demon since he goes underground. Whatever, I'm over it.

Wolverine
Wolverine always get put in the speed column for balancing. So the Power gem is most critical. The effect causes shadows which elp you cut opponents into bite size pieces (I kill Spider Man in four hits). The only bad part is lag, but it's the internal clock FTW. Juggernaut tries to put up a fight, but Wolverine is massive with his clones. Thanos fights hard and I have to use my Beserker Barrage X.

Magneto
More air combos, just like Psylocke. His fierce slamming them down is perfect to repeat combos. KOing Blackheart while invisible is definitely a highlight. Psylocke steals the Power geam and I still get a 90 fight. That's right! And I don't even need it for Juggernaut. I should have gone for the Magnetic Shockwave at the end...

Spider Man
More cloning. But Spider Man's is insane as it traps the opponent in between ensuring maximum damage. The only down side is a couple of dizzys, which cost a second for the opponent to land. Thanos was way too close for me.

Shuma-Gorath
The Evil Squid. Like Doom, I had to come up with some good ground combat to chain hits together. What I came up with works well and is very consistent. He just moves so slow, even in the air. He must Dhalsim syndrome. Overall, his run went well, he's just not made to be fast.

All for the Infinity Gauntlet.