Released in November 2007 by Bioware, Mass Effect is an Action Role-Playing Third-Person Shooter game centred on the character Commander Shepard as he/she attempts to save the galaxy from a race of mechanical beings known as the Reapers. This game is infamous for the depth of its character interaction and vast amount of choices for any given playthrough. 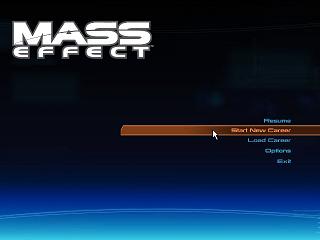 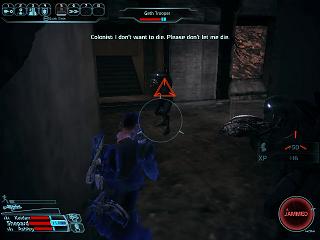 "The Mass Effect" is a video game that follows the story of John Mass Effect, captain of the USS Normandy. The universe is being invaded by evil robot aliens from outside the solar system, and it's up to John to stop them. To do this, he must ride 31 elevators, sit through 45 loading screens, and watch 63 unskippable cutscenes.

My initial goal for this run was getting a time under 2:30, which would be comparable to existing segmented runs on youtube, which I used as a basis for this run. I've beaten that goal by a large margin thanks to a large number of small timesaving tricks and glitches that I've discovered since starting the run.

The main things I do throughout the run are:
1. Dialogue skipping. By binding the skip dialogue button to the mousewheel, I skip dialogue pretty much as fast as possible.
2. Grenades. By hitting yourself with a grenade, you can initiate combat, which allows you to sprint for a short time.
3. Paragon points. You need to get 81 points in order to be able to persuade the final boss into killing himself. I pick these up wherever it doesn't cost time to do so.

Eden Prime: I didn't get a nade drop, but my time was pretty good, so I kept going. You don't need to kill the husks at the end if you kill the geth fast enough.

Citadel: I missed the throw on the assassins in Chora's Den, costing me a bit of time. The other fights went well. Got the Normandy speech skip.

Feros: Tower fight went pretty much perfectly. Relying on your squadmates is very random, and if the timing is off, you can lock the game. On the Mako, I tripped up a few times. It's very prone to flipping over. This section was definitely the worst for it. The cutscene skip at the beginning/end of the Mako section causes your party to glitch out in an amusing way, but you can't throw grenades, which are pretty necessary. I equipped an armor mod to disable the glitch on myself. The Zhu's hope and Thorian fights went very well.

Noveria: For some reason you can get combat by shooting the box at the end of the docks. This only works once per map load, so it's basically 2 free nades. I messed up a couple times on the level up before Benezia. Pressing esc is the fastest way to dismiss popups, and I screwed up the timing of it, causing me to exit the menu. That didn't really cost much time. The Benezia fight went okay.

Virmire: Parking the Mako where I did at the gates saves time walking back down the stairs on the way down. The security console upon entering the compound usually gives me a lot of trouble, but I was able to interact with it right away this time. The Krogan after the beacon were kept alive for as long as possible, so that I could keep combat long enough to not lose any sprinting time before the next group of enemies. The Krogan after the bomb were really well behaved this time. Usually, one or two get stuck in the elevator with me, and I have to throw them out. The Saren fight went really well. Hitting the persuasion on Saren drops the requirement for the one at the end of the game from 12 to 9.

Therum: I missed the gate jump, costing a small chunk of time. I also got stuck a couple times after the rock skip, but that's to be expected. That area wasn't built to have the Mako in it. I was still feeling pretty good at this point as I had more grenades than I knew what to do with.

Ilos: Went pretty smooth. I didn't move the Mako at the start because that will usually cause a run ending glitch that messes up the physics on the Mako. I also quicksaved before the mission because of another run ending glitch that resets your level at the start of the planet. Luckily, I didn't get either of those glitches and I was able to proceed.

Citadel: It went quite well. There's not much to say. The final boss killed himself, and I let the credits roll.

Casual difficulty Single-segment with resets 1:40:05 by 'your name here'.

Thanks to the discovery of new glitches and some better exectution, this beats the old run by over half an hour.

For whatever reason, the game doesn't like to load in a crouched position. So, instead of simply putting you wherever you saved, the game tries to find a place to put you where there are no obstructions nearby so that you can be safely spawned in a standing position. The game doesn't really care whether this position is out of bounds or not. So, if you get in a corner, crouch, save, then reload, you can go right through the corner. This doesn't work everywhere, and the exact conditions are unknown, but wherever it works, it works consistently.

When your character is placed on certain awkward geometry, the game tries to get you unstuck by shooting you up into the air. Often, this will happen immediately after clipping out of bounds.

Because of the new skips, we go for intimidate instead of charm for killing Saren. We need 81 renegade in order to unlock the third tier of the Intimidate talent, so that we can have the 9 intimidate required to convince Saren to kill himself. We get 20 renegade from choosing Earthborn/Ruthless, 32 from the colonists on Feros. 25 from killing the Rachni queen and 9 from the security panel on Virmire. Killing the Rachni queen is the only one of these that takes time to do, as the cutscene is slightly longer than the one for the paragon option.

We go with Adept because it's good at getting instant kills on most every regular enemy in the game. Throw can kill weaker enemies just with the physics force damage, and knock stronger enemies off of ledges.

A quick Benezia fight requires good cooperation from your AI squadmates, who tend to get stuck on things, and fail to kill enemies. Also, sometimes the enemies spawn in the wrong location. And, also sometimes you get knocked down right before a cutscene and start flying off into the sky or get put into stasis before a cutscene and are frozen in place for the rest of the fight. Basically this fight sucks.

Noveria is done first because fighting the Thorian at a low level is not a good idea at all. Having throw at a high enough level to kill the Asari clones is a necessity for killing the Thorian quickly. The Thorian nodes' damage resistances are based on the number of enemies left alive, so killing the enemies quickly is important.

Hoverboard Saren fight involves shooting at him until he dies.

Stalker Saren is about keeping him incapacitated with biotics so that he can't use Damping or Sabotage, and also so that he stays still while you shoot him. This is why we take Kaiden and Liara on the final mission.