Released in January 2009, The Maw features a small alien in a suit, who escapes from an interplanetary police car when it crash lands on an alien planet. Frank, the alien, puts his criminal skills to work and slaps and electric collar on The Maw, a voracious purple blob with teeth. Frank forces the Maw to work by clearing his escape to a communications tower in the distance, all while eluding backup police. 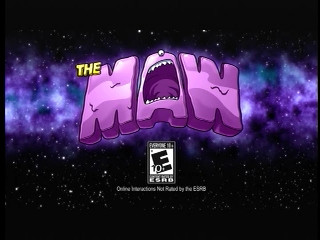 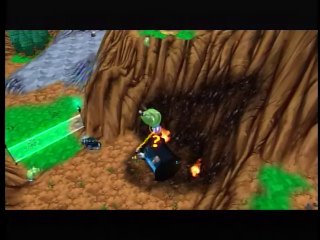 I fell in love with this game and its characters very quickly. In the words of the game's description on Xbox Live, "If he weren't a threat to all life in the universe, Maw would make the perfect pet." All the creatures are so alien and so delightful.

This game's gameplay is pretty simple and straightforward - and slow. But I call myself "slowbro" for a reason, and in games like this and Pitfall II the slow speed helps me greatly. Also the cutscenes are unskippable, so endure them or enjoy them, depending on the reason you're watching my videos :-)

The objectives in any% speedruns of these levels, at least until someone finds glitches that blow my times out of the water, are to solve simple puzzles and platforming sequences to reach the exit, while helping Maw eat enough creatures to be big enough for the next stage. The level won't end unless Maw has eaten enough, again barring glitches. All other creatures count as more food than the little blob guys (sorry I don't know the creatures' names), but not that much more, even though they count for far more kg for the game's other leaderboard category. Actually, finding routes to eat enough quickly is a bit katamari-like, and I like katamari games.

This speedrun has been completely a lone-wolf project. This game's forum thread is a very lonely place so far. But I must really thank the people on this game's leaderboards for helping me see how I'm doing, especially Akimaso for being the first to put up good times, I Am Martyr for his amazing Bulb Valley and his Looferland, royha3 for being an excellent competitor in Dirtlands (and awesome times elsewhere), and Tao and Zen for giving me a Planet Maw time to shoot for.

I am sorry that most of these videos include "_____ is online" messages. I didn't think to turn off notifications.

I thank, and am indebted to, nate for encoding these, mikwuyma for processing and answering my questions, and Enhasa for putting these on SDA. I also again thank the past SDA admin and staff members for making SDA so great!

Crash Site 5:56 - I am very pleased with this time, although the blob-eating sections could have gone a bit better. The second time control is gained, while Frank's still groggy, I don't think anything I do affects the eventual time. Unfortunately this time I just walked forward instead of trying to entertain. Sorry Maw for ditching you for a portion of the stage!

Bulb Valley 7:20 - This is the hardest stage for me to complete efficiently; I have to really concentrate not to hit wrong buttons when throwing all that stuff, and the bee-grappling section includes a great deal of luck. Route planning revolves around picking the optimal cluster of blob guys to skip, and I chose the first one. Overall I have the sinking feeling my route this stage is not optimal, especially since I am 11 seconds behind on the leaderboard. I use Maw as an alien-blob shield?! Actually I keep him with me there so he can eat the blobs. My bee luck was terrible on one bee, good on the rest. Other than grappling Maw instead of a creature once this attempt was very smooth, but like I said I doubt my route.

Chaindown 5:46 - This stage is so peaceful to speedrun, except when trying to eat the blobs I just burnt out of trees. Planning an eating route is crucial and complex in this stage, and I think I did well, but you know, prove me wrong :-D My walk past the beetle at first could have been better, but this is a nice smooth attempt. I tried something different - not latching Maw after the first five slugs - and it paid off. The most time is gained or lost near the end burning trees and eating blobs and trying not to burn other stuff, and that part went unusually well (it was still messy). I can't believe I burned those last two slugs at once! Course I missed burning one beforehand.

Dirtlands 3:47 - Enjoy this game's most fun, floatiest level :-) This attempt went well except an airstream wasn't blowing when I reached it later on. Also I am certainly not sure I chose the perfect blobs to eat. royha3 and I switched places on the leaderboard repeatedly in this stage - thanks so much for the competition!

Looferland 9:10 - This is by far the easiest stage to score good times consistently - once you know this route, 9:20 is cake. This is another level where choosing just what to eat is important. I eat all the soldiers except the ones way out of the way at the start and end, all the slugs I don't have to

go way out of the way for, and I try not to eat little blobs except when I can eat two or more at once. I have to be alert -- it goes a little differently each time. Sometimes I don't eat quite enough to pass the stage.

Mesas 6:19 - Sorry to say this attempt had a big ugly mistake, slipping down a slope while leading balloon Maw around. Also I pounded on the queen 'bee' a second or more later than I should, something I learned 2-3 days after this attempt. I've had smoother attempts, but this is my fastest. I think I have a very optimal route in this stage, but again prove me wrong! Actually, my "avg kg per minute" route where I eat all the slugs is more interesting - I jump over a rock wall near a bunch of trees to reach another path.

Dang, I'm apologizing again, sorry about several small mistakes in the last half of this stage. But the first half went way better than any of my other attempts.

The only glitch I utilize in any stage is that I can get the beetle to push me forward at the beginning here, either by roll-dodging into the barrier or by standing right next to the barrier. I'm almost sure the timer slows down when the game slows down for effect, and the roll-dodging method is easier to control, so it's the one I use. This time I position myself just right, so he pushes me way farther than normal. It is also possible to use the other method to bust past the second barrier, and in a lot of my attempts I do, but this time I think it wouldn't have helped.

Wow, you'd think from this video I have it all figured out how to get now-huge Maw to arrive at just the right time to eat the beetle, but I sure don't! Usually he arrives late, costing 5-15 seconds, or he arrives early, disrupting the beetle and killing my attempt entirely. The initial push, Maw arriving just right, and starting Maw's dash when I still wasn't sure what direction I was going all made this my best attempt by far up to this point.

The attempt was still going great until I got too close to platforms and lost my grapple on Maw, costing a second. Then I latched onto Maw when trying to feed him slugs, costing the better portion of a second. Last and definitely worst, right after that I had Maw not pointing quite right when charging, had to stop early, and walked with him a while to be safe, and got slowed down twice while charging, all costing 2-3 seconds off my normal 'safe' method and 7-8 off just charging full-speed (which I've only timed right 2 or 3 times).

Sorry I know nothing more entertaining I can do in the long stretches where Maw is in control than swinging left and right behind him. I did that a lot.

Planet Maw 6:35 - Shmups are way outside my skill set, and this level is a lot like a shoot-em-up. After quite a lot of playing my best was 7:10, about 60th on the leaderboard. (By the way, times in this stage are mostly cutscenes; the stage's gameplay lasts way way less than 6-7 minutes.) I was so scared of this stage I didn't play it for a long time, and I even offered on the forum to pay someone to record it! After my phobia passed I quickly got a 6:50, then worked it down to this. I think walking forward actually helps slightly at the start. I left one of the laser generators way too late, but otherwise this went well by my standards.