Released in September 1994, Spider-Man and Venom: Maximum Carnage is a scrolling fighting game for the Super NES and the Genesis based on a comic book of the same name. It prominently features the titular heroes, as well as an array of other Marvel characters in a fight to stop Carnage from taking over the city. 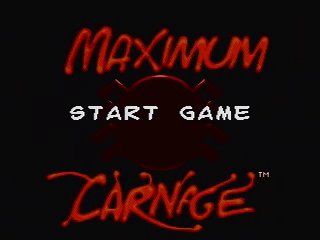 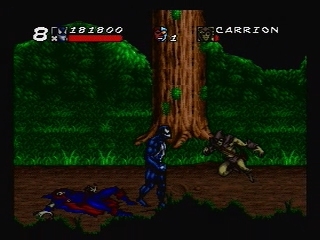 This was a childhood favorite that I could never beat, and much like with Skull & Crossbones I was surprised at how easy it is with proper resource management. Unlike Skull & Crossbones this was a pretty popular game back in the day that remains well-liked today, so it's been one of the most often-requested runs of mine.

The hand-to-hand combat uses one of my favorite mechanics in any beat-em-up, the power hit. This is an extremely powerful attack with 2 different versions (hand-to-hand and while grabbing), of which the hand-to-hand is better since it can hit multiple enemies. What makes this idea unique is that you build up power hits by landing a large number of consecutive hits on enemies without missing anything or getting hit yourself, thereby rewarding accuracy and safety even in a speedrun! You're going to see a lot of these throughout the first half of the game, and it's not as easy as it looks.

What makes it much easier, however, is the ability to cancel your punch combo and restart at any time. Normally you do a 4-hit combo with the 4th knocking down, but you can reset the combo by pressing up, down, up/forward, or down/forward. This is why you'll see me repeating the first 3 moves of the combo a lot. Helps out a ton with the power hits as well as locking enemies down in general.

Grabs are slower than punching for 1 or 2 enemies, but very helpful for dealing with larger crowds and enemies who block (read: girls). You can also do infinite combos on certain enemies with it, which you can see at a few points throughout the game. You can tap B and A after picking up an enemy to spin him/her and increase the damage on your throw, but this is only marginally useful since you tend to miss surround enemies more often with the throw.

The A button gets a fair amount of use in this game. Forward+A is a long-range grab, while neutral A is a web shot that freezes an enemy. The web shot is mainly used for setting up a power hit on multiple enemies. If 2 enemes are surrounding you and far enough away from you, neutral A performs a double smash on them for big damage; this is hard to set up on groups of normal enemies, but you'll see it once IIRC. It also instantly kills any pair of non-supervillain bosses and gives you an extra life, but only if you hit neither of them beforehand.

As for characters, Venom is better than Spidey in almost every way: More damage, more range, a jumpkick that isn't useless, and a power hit with a huge hit area all around him. I pick Spidey at the first branching path only because his two levels are far shorter than Venom's two there. Venom more than makes up for that later, when selecting him near the end of the game allows you to skip three full levels. Spidey is probably more consistent against Carnage at the end of the game due to his speed, though.

The most difficult part of the early game is the Hall, as Doppelganger is just plain cheap without any superheroes to help you. He frequently ducks under your punches and can randomly grab you out of your combos, so throwing Shriek at him and using your special ends up being the best way to fight. And yes, you have to lose that fight right before the Hall.

The second half of the game is dominated by superhero assists. Most of them instantly kill all non-supervillains (or at least take them down to 1 hit) and take half a lifebar from supervillains. Firestar only takes half a lifebar from everyone, hence I almost never use her. On the other hand, the Sonic Gun (Spider-Man icon) kills everything in the game or reduces it to 1 hit. Some supervillains have specific weaknesses: Demogoblin is taken down to 1 hit by Cloak the first time you fight him (but immune to him afterward) and Captain America near the end of the game, Doppelganger is always taken down to 1 hit by Cloak, Carrion loses most of his life from Deathlok, and Carnage is instantly killed by Dagger and taken down to 1 hit by Firestar. You cannot use superheroes during the two Fantastic Four stages, and you lose all of them for the last two Carnage fights.

One interesting trick in Prospect Park 2: Normally, Carnage is supposed to appear and hit you to end the level, and if you have low life when this happens you are forced to repeat the stage! However, if you finish off the last enemy with Deathlok, his long animation prevents the game from loading Carnage here.

For the final two Carnage fights, superheroes are replaced with the ability to switch between Spider-Man and Venom. The only consistent way to fight this guy is to use small combos and frequently switch between them, as you are briefly invincible after switching. Even with that in mind, he is still extremely random and can break all of your combos and use major time-wasting moves (axe arms, ceiling climb) at will. This was perhaps the best overall performance I've ever had on these two fights, and I am especially happy with the final battle considering he's even faster than before.

On the whole, this is one of my favorite speedruns I've done. The only issue is some bad luck early on that's hardly noticeable to most people, and this is the one and only no-death run I've ever done of this game. Thanks go out to GaeasBlessing on Youtube for telling me about the hidden Sonic Gun in Prospect Park 1, and everyone who watched my streams (http://www.justin.tv/srkfunkdoc ) and gave hints here and there!