Released in January 1994, Dr. Robotnik's Mean Bean Machine is a Puyo Puyo clone developed by Compile and published by Sega. It would later be reskinned and released as Kirby's Avalanche in April 1995. The game, no matter its name, is standard Puyo Puyo fare: match colored blocks up to eliminate them, and make combos to overwhelm the enemy with trash. 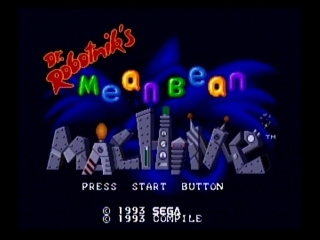 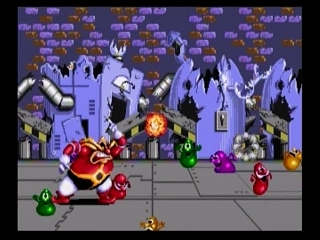 Note: Runs on Kirby's Avalanche are not treated separately, as the two games are just re-skins with identical opponent AI.

The options screen that shows hardest briefly shown before beginning the run. I was a bit hasty to get this run going at 4AM so I'll remember to give the verifiers a better chance to see the screen on future runs.

Stage 1: 36 This level wasn't good, I was going to restart if I topped out (over his column 3 clear b4 my attack,) if I didn't I'd continue... I didn't so I resumed.
Stage 2: 32 Over did the damage a bit, some hesitance with a piece or two but clean.
Stage 3: 35 Small mis-drop at the end with the 1st double red (should have dropped 1-2 instead of both on 2), but otherwise decent run. First of 2 time check resets.
Time check: +13, I'm not happy at this point, but I'm on par with my personal best at the time so I resumed.
Stage 4: 25 Since he stacks the edges, you can do with a weaker combo then necessary to win.
Stage 5: 32 Didn't like the pieces, took a risk, paid off. Did a 2 chain to finish him off with good RNG (5-3 with him already toping 4)
Stage 6: 31 I got lucky with his attack, he cleared alot of pieces so the damage killed him off.
Stage 7: 29 Not much to say, clean stairs, easy win.
Stage 8: 24 He stacked around column 3, I got lucky and the time shows it. Second time check.
Time Check #2: +4 Gained time, had a great streak of levels. No big blowups so I resume.
Stage 9: 28 Got the pieces when I needed them, the red L when he sent garbage over concerned me but garbage kept falling on 1.
Stage 10: 50 Nerves got to me and I played bad, just trying to get him to stop clearing puyo. I was thinking this was going to be a 390 (30s per stage average) up to this point.
Stage 11: 29 Bit of a sloppy piece start after stage 10, but his stack helped my big attack be successful.
Stage 12: 25 Fast thinking got me this fast time, good pieces to help out.
Stage 13: 31 Indecisive if I was going left to right or right to left, could have gone either way but I started from the right and could have gone faster if I waited but 1 piece queue made me attack early. Future games may have prevented my early attack.

Overall notes: Mediocre start and might have restarted after 3 levels but my 4-9 made sticking out worth it. Most levels sub 30 and only one level greater than 36s meant this was a great run. It can be improved sure, but I'm probably going to hibernate until 2012 when I'll aim for 390 again.

Also like to give shoutouts to the following people

Axon for nudging me into submitting to SDA after showing me Kirby Avalanche verification notes
Aneeslol for playing puyoVS against me that helped inspire to do the run.
Compile for making the Puyo Puyo franchise Mean Bean is based off of.
Sega for making so many rereleases of Mean Bean Machine to play for recording the run.