The third game in the Mega Man series was released in September 1990. It introduced Proto Man and the robot dog Rush, and was the only Mega Man to bring back versions of the robot masters from the previous game. 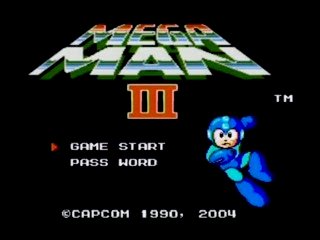 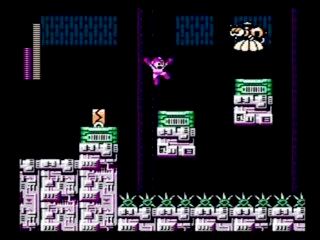 Thanks to everybody at SDA for being supportive and interested.
Special Thanks to Tiki for his encouragement in all my Mega Man speed runs.

This was played on the Xbox version of the Anniversary Collection. I estimate with the advantages listed below there is about a 4 minute comparison between this version and the NES for a full game run. And an optimal run for me would be around 32 minutes flat.

These are the advantages over NES:

+1 Top Man: I double grabbed that first ladder, that was unusual. The bulldozer mets can be killed in 1 jump, I messed up the 1st one but killed the 2nd one in 1 jump. The giant cats got owned with autofire. I accidentally got hit on Top Man's last stroll and got 1 hit behind, but it barely cost me.

+1 Shadow Man: Accidentally got hit by that one eyed two legged thing. The slide jump from platform to platform went good till that 3rd from last Parachute enemy didn't drop low enough, and I got hit by the next one but it allowed me to go right through the last one. The Shadow Man fight went good this time, this fight is more annoying than it looks.

+5 Gemini Man: This level went really good. The first part was done more efficiently and without mistakes. I didn't get hit by that little hopper this time. The only real mistake was not jumping over the big bouncer at the end, I got hit just like last time. The Gemini Man fight was good.

+/-0 Needle Man: I threw the shadow blade at that 1st met just too late and he got his 3 shots off so I had to take extra time to get up on the right side of the platform. Later on I got hit by that needle press, it barely cost time. The Needle Man fight was good, he's pretty easy.

+3 Magnet Man: The first part of the level was alright, I don't know why I grabbed the ladder right before falling into the proto man fight. The proto man fight went good with the shadow blades that take him out twice as fast as mega buster. The rest of the level went real good. The Magnet Man fight was great, he did the quicker pattern and I ended up right in the middle.

+/-0 Hard Man: I decided to not use rush coil on the first ladder because I don't have to wait on rush coil and I can get a quick slide off of the top of the ladder. I got hit by those monkeys twice. A better option here is to use top spin on the monkeys, I think it would end up saving time even without using rush coil on the next 2 ladders. I was too hasty jumping to that ladder after the met and had to jump again, same thing happened when attempting to slide under the big bouncer at the end. I had a good proto man fight though. The Hard Man fight was pretty good for not getting hit. I would've gotten hit from underneath him to prevent being frozen but I thought I'd die because my health was low.

+2 Snake Man: This was another real good level. The only slight mistake was having to backtrack for a split second to hop onto rush jet that one time. I even took the risk of sliding jumping under those cloud bullets at the end of the level. Snake Man did the best pattern and it was a good fight.

+/-0 Spark Man: I should've gained a second on this level. I missed a slide, got caught on that last falling rubble, and Spark Man jumped all the way left. I did a pretty good job dispatching him though. Ended up about even on this level.

-1 Spark ?: I wanted to use Gemini laser on Quick Man Docbot so I used shadow blade at the start instead of gemini laser. I got held up because that first sparky dropped a refill and made me miss my jump to the next ledge. I also got hit on the Metal Man Docbot fight unlike last time. The section afterward wasn't as good either. The Quickman Docbot fight went pretty good. I guess it doesn't matter whether you use Snakes or Gemini on him.

+1 Needle ?: This level was pretty much just like my previous run. Of course the slide speed glitch was most useful here on this level. I think I gained a second because I didn't miss Crashman Docbot with the last Hard fist this time.

-1 Gemini ?: The first screen on this level went good until the end I missed my jump and got hit. I still did much better on that part than in my last run. The Flash Man Docbot fight was sad. The whole fight got messed up because I barely stepped too far left and triggered him to turn back left instead of continuing to the right. The rest of the level went good and so did the Bubble Man Docbot fight. This level should be around 5 seconds faster.

-1 Shadow ?: I got hit by that cycloptic bastard at the start. I got smart and used shadow blade to destroy those light switches on the ceiling this time. The Wood Man docbot fight wasn't quite as good as last time because I got hit and had to hit him 3 times at the end. The rest of the level went pretty good and so did Heat Man Docbot fight.

+/-0 Break Man: I killed him slightly faster this time even before he could land on the lower platform. It's possible to jump to the higher ledge as soon as you spawn but I didn't do it this time.

+5 Wiley 1: I had an idea of using Gemini laser to take out those 2 top fiends out at the start faster, it worked. This level was smoother than last time because I practiced it more. I gained a few seconds on the Turtle Machine fight as well.

+1 Wiley 2: This level was about just like my previous run accept I slid directly off that one ladder and I didn't collect that large refill for rush jet since I'm not going to need it. Easy yellow devil fight with autofire.

+1 Wiley 3: I did a quick coil in the 2nd screen thanks to slide directly off the ladder. The level would've been perfect accept I missed the jump in the next to last room with the moving platforms. I usually make the jump like 90% of the time. It cost me a second at least. The Clone fight was perfect, I practiced it.

-5 Wiley 4: I started choking on this level. I got hit 2 more times at the start than I was supposed to. I missed the 1st slide jump over the 2 ledges, then I fumbled around trying to drop to the bottom. I grabbed the large refill from Snake Man because of those extra hits I took. Needle Man would've been a better fight if that 3rd Gemini shot would've counted, I went ahead and grabbed the refill since he jumped close to me. I used gemini laser on Gemini Man because I could beat him fast and not get hit. The hard man fight wasn't good, I meant to get up under him and get hit to avoid being frozen. The Magnet Man fight was terrible, I messed it up bad. Spark Man fight was okay. Top Man fight was pretty good, I shot the last shot from farther away so the game wouldn't pause. The Shadow Man fight was close again. I almost ran out of ammo, this time I avoided the health refill which is unneeded. I filled up Top Spin on the way out.

+2 Wiley 5: I saved some time here using shadow blades instead of rush jet. The classic backwards moonwalk was still done.

-1 Wiley 6: I lost a second on this level because I had to jump an extra time using shadow blades on the first form. I stuck with Top Spin on the second form because I couldn't beat him with the Snakes consistently even with autofire.