Mega Man 4, released in January of 1992, finds the Blue Bomber going up against Dr. Cossack, a mysterious scientist behind the latest attack by eight robots. Of course, it's really Dr. Wily again. This installment saw the first appearance of Eddie, commonly known as Flip-Top, a mostly useless source of random powerups. 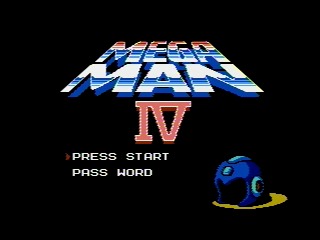 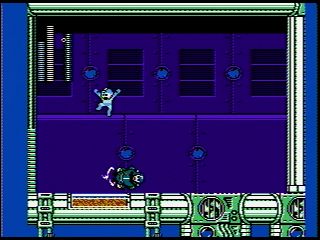 This is a pretty good run trough Mega man 4. My goal was sub 50 minutes but after I've watched this run myself i think that it should be hard to reach my goal.

The biggest mistake i did is the last fight against Dr. Wiley. I haven't seen the tool assistent speedrun of this game in a long time either So probably i have missed a couple of trix But I think that some of the tricks is new for everybody in this run.

Every time i have a charged shot ready it slow down the game if there are two enemies on the screen. (its like a extra enemy)

I try to stand in the middle of the room after beating every basic boss since Mega man himself run to the middle annyway and i save i little bit of time if i already stand there.

You can see "black man" and "green man" in this speedrun. When i have a charged shot and release it perfect when I going into a new screen mega man turns black :) And if the charge isn't fully charged he turns green. don't know why but it's a funny thing.

Skull man: Terrible beginning of the speedrun. I been hit on the first enemy in the game, HAHA! I hope you don't say "Oh, this guy suck" and then cut the speedrun of.. I also lost a couple of seconds on the boss (skull man himself) when i missed a charged shot.

Dive man: I never tought i should be able to "speed" this stage. But after hours off training Im pretty good after all. I use Skull barrier in the beginning of this stage since it been much easier. Still I fell down in one place. But overall a pretty good stage. And good to know is that you can't jump in the middle of a slide in Mega man 4 when you are in water. that's why i take it a lttle bit safety in some places of the stage here. The slides is also a little bit longer in the water.

Drill man: This stage i did pretty good. I think you can see "black man" for the first time here. I used Skull barrier before the boss. Pretty easy with it. And drill man himself is random. I haven't figuried out a way so he stay over the ground the hole time. annyway, the boss fight went well here.

Toad man: The beginning of this stage really suck. It is one of the hardest places in the game. But i managed to stay alive. The snails is very hard to "speed" trough in this stage to. And i did pretty slow snail fights in this speedrun *sigh*. The only weapon i have find that works good againsts the snails is ring but since i don't have it I gotta use the buster. I don't have more to say about this stage or the boss.

Bright man: Probably the stage which have stole most life from me. The second hole in this stage is also one of the hardest places. That's why i use skull barrier. I also earn lot of time when i use the Jet over the spiky places in this game. Also save som time when I not change weapon between the spiky places.

Pharao man: figuried out that brights weapon could be usefull in the beginning here :). I also take the Ballons wich i think I could maybe save time later in the game. You can also see "green man" in this stage. That was the third time i have seen him. Also have luck on pharaos move. I think you save time to shot him with normal charged buster instead of the use of bright.

Ring man: The beginning of this stage is hard. I felt down in one place but came up pretty fast again. Know that I could have used R.Coil to save a second here but i don't feel for it..Not much to comment here. The stage was well done.

Dust man: not much to comment. Have luck on the boss since he didn't "suck" at all.

Dr. cossack castle part 1: Not much to say. I use my ballons to save time. And was hit one more time then I use to so i was forced to do the boss fight a little bit safe.

Dr. cossack castle part2: hold the jet a little bit longer to save som time. Not much to comment.

Dr. cossack castle part 3: I use to hate slow stage like this. but i like to use bugs and dance in this stage. It seems very ugly :)

Dr. cossack castle part 4: nice beginning of this stage. I was forced to fill up the ring.. Haven't find another good weapon then the buster on cossack himself either.

Wiley's castle part 1: I did some mistakes in the first half of this stage but after that it went well. Use the dust shoot on the boss instead of the buster. Don't know wich weapon is the best but later i must fight skull barrier with the buster again since I don't have some dust left.

Wiley's castle part 2: Ghhaa!.. Could have done this stage much faster. many terrible mistakes. not much more to comment.

The final stage:
Don't know when i did a slower Wiley fight. This was this runs worse moment. Probably lost around 10 seconds.