Mega Man's only classic-series Super Nintendo game was released in September 1995 and takes place six months after Mega Man 6. Dr. Wily has escaped from jail, and you must help the Blue Bomber bring him to justice again. Mega Man 7 frustrated many long-time fans by blowing up the sprites to ridiculous sizes and dishing out cheesy sound effects, surprising fans who thought their cheesy anthropomorphic robot jumping game wouldn't be cheesy or involve silly robots with silly sound effects. 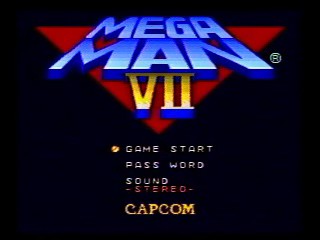 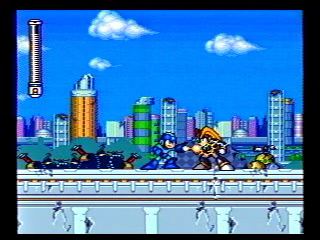 SHAMELESS ADVERTISING: GO TO http://www.justin.tv/obdajr to watch me play games!

Any Questions or Comments? feel free to e-mail me at shawn DOT Naka AT gmail DOT com

I finally have a run that I want people to watch! I've been working on this run for a long time, failing a retarded number of attempts. I'd like to thank all those people that have inspired and supported me to get a time this low in one of my favorite games from my childhood. In intrest of not leaving people out, i'll leave it as a general appreciation for anyone who has either contributed to the run, watched my streams, or encouraged me to better my time! you guys know who you are,  pat yourselves on the back or whatever =D

lets get into it shall we? I'm going to avoid talking about my small errors, and focus on the run's strategy.

Intro stage [00:00 - 00:35] a 35 second intro is about as good as i can ask for. I take damage from all the enemies, expecially the punk bulldozer , so that one touch from bass ends the level. On an unrelated note, watching the intro cutscene has nearly driven me and those who watch my stream insane...

Freeze Man [00:35 - 03:20] There were a couple suboptimal movements in the stage, but otherwise it was solid. Items to grab here are the first Rush plate, Rush Search, and the Exit item. 100% route restrictions force me to complete Freeze Man and Cloud man before Junk man, so starting here makes the most sense. This run was like one of the only ones where i forget to shoot to the music while waiting for rush to search. The boss fight went about 2 seconds slow because i mistimed a charge shot, but the end result was still good.

Burst Man [03:20 - 06:25] Only the rush plate to grab here, but this stage sucks. There are way too many ways to die instantly. If i am slow between the first and second rising bubbles section, I have to reset because missing a cycle wastes up to 13 seconds. Getting the one shot kill with ice on the last non boss enemy is always fun.  Burst man went good as well, my strategy is kinda risky, but as long as i don't die it's all good.

Cloud Man [06:25 - 09:27] Another stage that can kill you on every screen. Im pretty sure ive died in every single pit on this stage. A rush plate and a proto man visit are the requirements for this stage. One of the trickiest jumps in the run is between the two rotating platforms (dubbed the 'Cloud Jump') which is fairly precise but saves nearly 30 seconds in the level. The fans at the end of the level are very annoying as well; if they don't inhale, i usually just jump into the pit and reset my game. My strategy for Cloud Man uses the down-y shot of burst bubble to skip the long bubble trap animation. I take damage inbetween shots because the wind doesnt affect me while i am sporting my invincibility frames.

Junk Man [09:27 - 12:24] When i make it to junk man's stage, i relax considerably. The tricks in this stage are far more consistant and easier. This stage has the first intentional death in the run: I go into the basement using ice to grab the rush plate, then die so that i can go to higher elevations to grab the rush jet.

Turbo Man [14:32 - 18:02] Turbo Man is first because i need to get the second proto man visit before fighting him in Shade. Additionally the Homing fist upgrade is dug up here. Both the big truck and Turbo Man himself can give terrible RNG, but this time went ok luck wise. The turbo man fight wasnt executed prefectly, but whatever.

Shade Man [18:02 - 23:40] Why am I doing this stage next anyway? i have no idea... Stuff to grab here include the energy converter to the east and the protoshield to the south. Proto Man is the biggest source of RNG in the game, with fights having a range of 25 seconds dependent on how many times he charges his buster. I take damage from him on purpose so that one hit from the shield joe enemy outside will kill me and allow me to go the other route. Both Pumpkin mini-bosss kills were amazing, and the shade man punching went as planned.

Slash Man [23:40 - 26:39] There are a lot of pits and spikes in this stage as well, but the most dangerous part is slashman himself. I have to break Beat's cage after climbing the burning tree, but thats the only collectable in this stage. Rush Jet makes this stage way more bearable while also being conveniently way faster. The ketchup bombs that slash man throws at you are the most annoying thing in the world... i hate them.... so .... much...

Wily 1 [29:08 - 33:33] Aside from messing up the Bass fight a little bit, this stage went really really well. There are more fan enemies in this level, but they are only minorly inconvenient when they blow the wrong direction. I figured out a way not to get grabbed by Guts Man, too bad it involves a suicide jump into his forehead.

Wily 2 [33:33 - 36:59] Junk Shield is OP guys... proof in this stage. The Bass and Treble combo attack is an annoying fight, and can go a lot faster than how ive done it in this run. Im not saying this fight is bad, but ive recently learned there are some tricks to manipulate his movements that i have yet to practice. On top of that, the turtle boss gives me pretty bad luck and i have to sit through two waves of mytosis. The stage in general was good though, im happy enough with it.

Wily 3 [36:59 - 39:13] A healthy mix of S-adapter and Rush Jet gets me through this stage. One problem area is the lagg fest in the room with the invisible platforms. i resolved that killing as much stuff as i could to reduce the lag was the fastest way to get through it, and the buster seemed to be the best way to do so after many headaches. The flying skull boss was swiftly dispatched with some cheater noise crush strats.

Wily 4 [39:13 - 46:43] The home stretch! Most of the refights go well, with the exception of a random bubble hitting Cloud Man and Burst Man doing a little too much damage to me. The Wily Machine gave a bad pattern, resulting in 3 cycles rather than the ideal 2, and i accidentally use an E tank instead of an S tank, but the final fight went pretty good.

Thanks for watching my run guys, it was a tonne of fun!