Released for all of the current consoles' downloadable game services, Mega Man 9 was developed by Inticreates, the people behind the Mega Man Zero series. The most shocking design aspect of the game is that the entire game was made in classic 8-bit Mega Man style, down to the music, graphics, and even flicker and slowdown (if you want it). Fans welcomed the game's creative, varied weapons and classic Mega Man gameplay. This is the first game in the series to feature a female robot master, Splash Woman. But don't worry, Capcom stayed faithful to their roots, as Splash Woman is a blatant Leviathan ripoff. (Yes, the entire game was created in classic 8-bit style!) 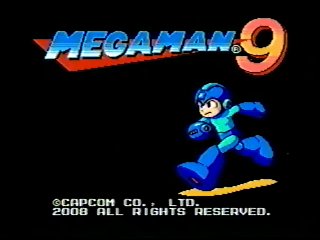 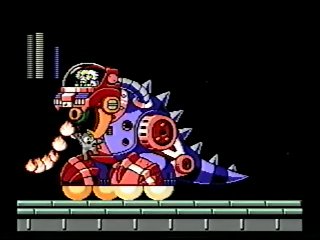 An in-game time attack in this game is very different from an RTA run. For this category, pausing to change or cancel weapons, picking up health or energy drops, and time in-between stages (including the item shop) do not count towards the final in-game time. Therefore, the general strategy for this run is to switch weapons whenever necessary in order to defeat enemies and advance as quickly as possible.

This boss route was worked out by MegaDestructor9 in a segmented 19:18 run that has since vanished from the internets. Getting a time that low requires perfect RNG and some super risky strats that just don't make sense for a single segment run. Tornado Man is done first as Tornado Blow speeds up almost every other level. Splash Woman is next as she is somewhat weak to Buster. The rest are done after the corresponding weakness weapon has been acquired. Galaxy Man can be done before Magma and Hornet, but I found Rush Jet more useful in Galaxy than in Hornet. Hornet is pretty much required for the Jewel Man miniboss.

To summarize, this game is RNG hell to run.

Stage breakdown is below. Note that the in-game timer only reports to the nearest second, though I'm almost positive it internally records the time with higher precision. Therefore, the real in-game time of each level could be up to a second different from the reported times.

Tornado Man [1:57] - I would guess that somewhere between 30-40% of my time running this game was spent in Tornado Man's stage. The spinning platforms are on a timer and in order to avoid waiting for the last set of platforms against the rain, you have to bust your balls through the stage up to that point. At first I thought it was impossible and that MD9 was a cheat (I know he's not), but I eventually became consistent at making it there in time. This is followed by a huge RNG boss fight with Tornado Man. At the time of this run, I would not accept any in-game time over 1:57 at the end of this level. Somewhat unfortunately, this particular Tornado Man pattern gave me a 1:57, so I didn't reset. My PB for this level is 1:52 and requires a rare pattern. Since there's bigger RNG fish to fry later in the game, I press on.

Splash Woman [1:45] - Tornado Blow is used here to speed up both the bubble puzzle and the first two moving platform screens. It is possible to speed up the third moving platform screen again with Tornado Blow, but it is very risky and hard to execute. These speedups are only practical for an in-game time run. Pausing and switching between Rush Coil and T-Blow is too slow for an RTA and it is faster to do this level later with Rush Jet. The Splash Woman fight is tricky, but I studied Chlorate's buster only run and nailed his strat pretty well.

Concrete Man [1:25] - Pause buffering on the elephants is kind of a wuss strat, but since it doesn't count against in-game time, I might as well take the easy way out. The jump with T-Blow at 7:44 is tricky; the gap in the floor is the width of Mega Man + 3 pixels or so. The final T-Blow right before the gate was a good suggestion from Siccarius. Concrete Man didn't give me the optimal RNG as he jumps in the air out of reach, but it was still an OK pattern.

Magma Man [1:27] - Hello pause fest with lots of weapon switching. Again, this level looks very different in an RTA. I even pause a little more than necessary because I am looking for extra energy drops for Concrete. Extra concrete can be used to mini-zip through some of the enemies on the screens following the dragon. I didn't get any extra energy here, so chalk that up to more bad (but not terrible) RNG. The Magma Man pattern wasn't optimal either as I don't know if it's possible to get the double T-Blow hit if Magma Man is not leaping from the center of the room (see the IL run). My strategy is to mix in some Buster shots in between. This works quite well and is still pretty fast.

Hornet Man [1:20] - I completely botch the screen at 12:51 and lose a second or two. The miniboss gives me a crap (but not super crap) pattern. Not much else to say about this level. Boss fight went well.

Galaxy Man [1:48] - This is a pretty easy level until 17:03. A lot of runs were reset by missing the jump over the first UFO-thingy as you can't recover to jump up the platforms without wasting a ton of time. Galaxy Man has only two patterns and he gives me the crappier of the two, which is about 3-4 seconds slower.

Plug Man [1:27] - Similar to the spinning platforms in Tornado Man, the disappearing block patterns are all on an in-game timer throughout the level. In particular, it is important to reach the section at 22:03 at the right point in the block cycles, otherwise you can't get through by just riding Rush Jet in one go. Also, there are a row of disappearing blocks at 22:39 that block your way. The only way to get to through this screen one cycle sooner is to do some crazy zips with concrete (again, see the IL run) that I don't believe are practical for a single segment run, especially 8 levels in. My time here after 8 robot masters is 12:33; my PB is 12:30.

Wily 1 - The dragons take 5 concrete shots to kill and require some serious mashing. I was fortunate to nail it here. To kill the boss, you must shoot the big spike balls to the far right a total of 14 times. On the last 4 times, the enemies don't respawn, but otherwise the row you shoot is irrelevant. My strategy is to alternate on the bottom two rows for the first 10 times, then use 3 Tornado Blows to hit up to all 4 rows simultaneously. This way, I never have to spend time traversing up to the top two rows. BHB can then be used to clean up what remains.

Wily 2 - The practically useless strategy with Rush Jet at 27:32 is thanks to Privateye. Similar to Concrete Man's stage, there is another difficult jump at 28:04 that is again only 3 or 4 pixels wider than Mega Man's hit box. It's best to line this jump up with Mega Man flush or almost flush (but not touching like I was on the first jump) to the vertical black space in the floor nearest to the hole. The last phase of the boss can be done in one iteration with the correct RNG. Unfortunately, without an emulator for this game and with it being at the end of a long level, I couldn't drill this out and was never able to get the one iteration kill in my repertoire.

Wily 3 - I've heard the you can speed up the second gravity section using a crazy risky strat that involves Rush Coil on the spikes, but I have yet to see a video of this or figure it out for myself. Probably wouldn't be worth going for in a single segment run anyways. Missing the one cycle kill on the boss is a 100% run-killer. This is the most important trick to learn for anyone wanting to run this game.

Wily 4 - Galaxy Man gives me his bad pattern again, costing me a total of about 7 in-game seconds combined in the two fights. Concrete, Plug, and even Troll-nado Man give their optimal RNG patterns, and only the silly hornets in the Splash Woman refight cost me a few seconds. When I was playing the egg fight, I thought I did it perfectly, but I actually missed hitting the boss with the fifth egg and no damage comes off. The second Wily phase gives near optimal RNG. The final Wily capsule phase is the biggest component of RNG in the game, and of course it comes right at the end of a run. I believe the difference in times is somewhere in the ballpark of 20 seconds between the optimal and worst patterns here, and this alone makes the game a headache to run if you care about your final time. I finally put together a decent run here with a near-optimal capsule pattern.

I was able to predict the final time to the second during the live stream and this wasn't the first time I've done so. I guess that goes to show how much I played this damn game. I think I put in about 20 months total playing on and off. Even though it was RNG hell, it was fun, so I don't regret it.

Thanks to:
- MegaDestructor9 for coming up with crazy awesome strats that I used as a blueprint for this run.
- ZeeJustin for several helpful suggestions when I was first starting out.
- Satoryu for the pause buffering strategy on the final Wily capsule to help prepare yourself for his random spawn position.
- Dethwing for explaining in-game time over and over to everyone that came into my stream.
- Siccarius for advising me to save a tornado blow for the end of concrete man's stage.
- Chlorate for demonstrating a better Splash Woman buster fight.
- The Sunday Sequence Break for showing highlights of my improvements multiple times on the show.
- Nitro1473 for helping with audio commentary on a previous run (unfortunately it didn't record properly).
- SDA for existing.
- Anyone who watched me spend way too much time on stream playing Tornado Man's stage. The viewers kept this run enjoyable throughout and kept me from going RNG insane.