Released in March 2006, Mega Man Powered Up is a remake of the original Mega Man game that actually offers players some good replay value with multiple characters and game modes. The game not only lets you play as Proto Man and Roll, but it also lets you play as each of the robot masters. The game retells the origins of Dr. Wily and Mega Man's tumultuous relationship (and yes, the story actually involves Dr. Wily from the beginning). 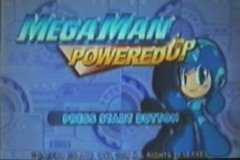 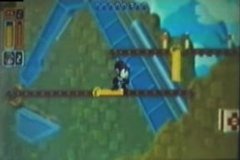 Note: There are three categories (not including characters) for new style Mega Man runs: best time, best good ending time, and best hard mode time. You can switch difficulties as much as you want for the first two categories, but to qualify for the latter category you must play on hard mode throughout the whole game (obviously).

Well, I think this is in fact the first PSP run to be put up on the site. What an honor. To record this, I used the Innovation PSP TV adaptor, which is basically a mirror in a fancy box that clips onto the PSP. It's not quite as good looking as direct feed, like a PSP2TV, (which requires you to open up your PSP, something I ain't doing), but it's better than a camera.

On to the run. This uber-remake of Mega Man 1 offers a little extra. Besides reworked stages and two new bosses, this game also times every stage, which makes everyone's lives easier. Also, MMPU has the weird option of selecting the difficulty level for every stage. You are not required to stay on one difficulty setting. So because of that, most of this run is on Easy because of less enemies, lower AI, and extra platforms.

I'm pretty glad with this run. Beats the pants off my Maverick Hunter X run... I may do another one of these in the future. Until then, enjoy.

I went ahead and did a run with Protoman because he's just plain awesome. High jumps, quicker running speed, and automatic charge shots. How can you lose? With his low defense, that's how. Regardless, this is slower than Mega Man overall, but a lot of places are much quicker with Protoman.

There's not much to say about this run. It's by no means perfect, as evidenced by me slipping on some oil, but it's still a great run. I dunno if I would redo this in the future. Besides the usual mishaps, there's not much to improve on. Enjoy.

I admit that this isn't my first speed run... I had tried other games before this and each one needed improvement before they could be considered good... I didn't give up hope, but realized that I was approaching everything wrong when it came to speed runs... I then decided that one of my many new years resolutions for 2010 was to stop rushing and submitting and take my time with submittions... While I should still try to work on those games still, I continued to jump around seeing other games to try... Somewhere along the way, I was watching some of Satoryu's speed runs and happened to stumble upon a few megaman PSP speed runs (or rather all of them since all Megaman PSP speed runs are all property of Satoryu...) and came up with new ideas for speed runs...

I may attempt Maverick Hunter X later, but for now I had an interest Megaman:Powered up and one special feature it had... In case you didn't read the intro at the top of the page, "The game not only lets you play as Proto Man and Roll, but it also lets you play as each of the robot masters." I knew that I wasn't going to beat Satoryu as Megaman or Protoman, so I decided to try one of the Robot masters... Some robot masters are very difficult/annoying to play as (such as Oilman & Gutsman) while some are actually quite fun to play as... The question I asked myself though was, which one should I try first? It came down to two robots, and I still hadn't been able to beat the game with elecman on normal yet so I went with Fireman...

Fireman is very easy to play as since he has unlimited access to his Fire Storm attack, which he can fire up to three shots at a time & the ability to have a small fire shield protect him, so in some ideas, he is just like megaman, but his shots are more powerful... The only downside to playing as Fireman is two things: 1) Water: if he gets wet, his fire goes out and all he has to protect himself is just the fire shield.. This is only seen twice in the run; once at Iceman's stage, the other at Wily's Castle 2... Speaking of Iceman, he was the second reason for the downside since Iceman's attack are (of course) fireman's weakness, so he takes more damage if he is hit by iceman, and fireman's attacks barely hit iceman as well... Other than that, the run was simple and straightforward just like the other two Satoryu runs, but slower for obvious reasons...

The only other thing I can say about this run that makes it different from Satoryu's is also the inclusion of Megaman?, a clone of mega man who you fight at the stage that you are the robot master at (ex. Fireman fights Megaman? at Fireman's Stage), but it isn't much to extend the run by that much...

I'm happy with how this run turned out, and I wasn't expecting much since this game has pretty much gone untouched for about 3 years now, though it is nice to revive interest to the PSP (and to be the only other person on SDA to contribute a run on the PSP)

This run is decicated to the following:
Those who help me get these runs shown
The people who had put up with me and my bad runs
People who wants to do speed runs
and of course, Satoryu, who was the main driving point into me doing this