Released in October 2003, Mega Man X7 is considered by many people the worst game in the Mega Man X series. Probably what repulsed most people was the change from 2D to 3D. The whiny voice of the new character, Axl, didn't help matters either. Axl decides he's had enough of the Red Alert Syndicate's violent ways and joins the Maverick Hunters. The Syndicate's leader, Red, doesn't like this and goes nuts to get Axl back. 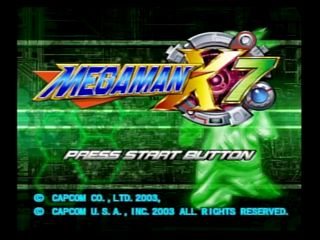 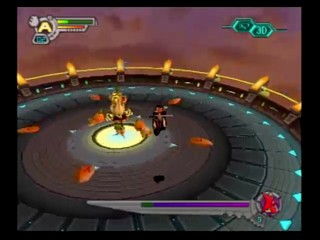 Mega Man X7 is a story about how X took a 9-5 paper shuffling job to hide his emo attitude while Zero and the new guy Axl do their best to piss the Mavericks off by taunting them as much as they can. The epic conclusion involves an accidental revelation of Zero's and Sigma's "mysterious" past. X keeps whining but ultimately refuses to even lift a finger.

Welcome to the world of Mega Man X7, the probably most disliked part in the Mega Man X series. It's almost 18 months since I got the game out of curiosity; at first it was challenging (and for all the wrong reasons, too...), but I kept toying with the idea about a low% completion, and finally beat it (with low% stuff only) a few months later after I suddenly gained an inspiration to play it instead of letting it gather dust on the shelf. I was rather pleased as I considered a low% completion of the to be rather ridiculous in itself. By contrast, I've never collected everything, nor do I intend to, not even now that I know how to potentially get everything. It's just too tormenting & disheartening to think about, even if the route planning (for a run) is fairly straight-forward. For a 100% run, anyway.

After my first completion of the game I planned the low% run occasionally, until I finally decided to go with it last spring. By that point I had a clear plan in my head on my route and strategy, although I changed a lot of it during the execution part.

The core idea of this run is all about abusing the hapless game engine and the few weapons that are actually powerful, overpowered, even. Of course, the game has lots of useless moves which serve to ruin the game play, but as long as you stick to using the correct moves you can move about quickly & efficiently. Sadly, on the flip side, whenever I make a mistake, it sticks out pretty badly.

The bosses can be manipulated to some length with certain maneuvers and positionings (and when you consider the clunkiness of the game play, it's quite easy to do, actually; no inhuman super powers required). The only boss I didn't manage to force to do my bidding was Vanishing Gungaroo, although you getting him near the wall with you makes him behave in a different manner than when both the player and Gungaroo are on the center. This manifests mostly as easier Raijinshous and higher change of getting stunned by accident.

Trivial glitches that didn't make it:

The route mainly revolves around the boss weapons and boss levels (they get a little tougher every time I defeat one, after all). I decided to go for the Explosion as my first weapon; it's one of the three weapons that can do massive damage in a short period of time, the other two being Raijinshou and charged Splash Laser. CSL is unavailable to me for obvious reasons. Vanishing Gungaroo is annoying to fight against regardless of the weaponry anyway, which is another reason I chose to go with Gungaroo as the first boss. After choosing VG it was only natural that I tackled Stonekong and Tonion next. Choosing the fourth boss wasn't that simple, but in the end I opted to kill Anteator next to get Snipe Missiles for Warfly's stage. The rest is all about giving Axl all the power ups and choosing the order so that I won't be hindered by the tougher bosses. After Axl gets powerful enough to shoot two Explosions (which happens in Flame Hyenard's stage and onwards), he becomes an unstoppable killing machine, which is the reason I don't give Zero any more power than he already has. It's not like he needs it or anything, anyway.

With this I end my low% speed run of Mega Man X7. Thank you for watching!