Released in December 2004, Mega Man X8 is the first X game to be rendered in 3D with all 2D gameplay. It continues X7's coop system while at the same time introducing a number of new gameplay elements like a money system. 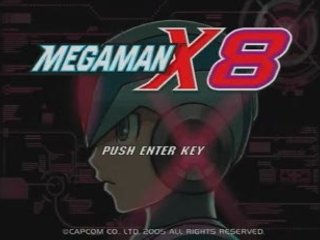 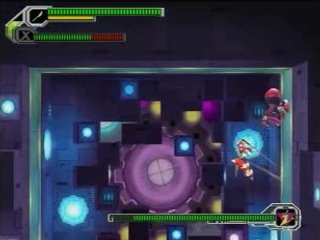 Category Note: We now use the in-game definition of 100%.

Now for those comments... I decided to choose the Japanese voice acting, mainly because I've had traumas from the voice acting of the previous games (X4...)

You won't be seeing Axl much in this run, because he's slow, ineffective and lacks the ability to shoot while walking.

Intro. Not much to write home about. The "walls closing in" part went really smoothly, and I'm happy about it. The excuse of a boss at the end falls down quietly.

Burn Rooster's stage went well. It's rather simple (and slow) thanks to the long, long autoscrolling parts. I take the Helios Foot Parts as I go, thus gaining invincible dash, which shall prove its worth on later stages. There weren't many mistakes in this stage, and Rooster co-operated somewhat nicely. This stage is one of the very few that actually benefits from Axl's presence.

Earthrock Trilobyte. I chose this stage right away, because the stage has Body Part Icarus, which halves the damage taken, and more importantly, enables me to get past enemies without "recoiling", similiar to shock buffers of the other two. I rely on that quite a bit throughout the game. The second fight with the Mechaniloid could have been faster, I miss when hitting it with the crane. I also missed the first double attack on Trilobyte, which is humiliating, but all in all, things could have gone much worse.

Bamboo Pandamonium. The ride armor does massive damage to the masses, but after the first wave I ditch it, because Vile will make his appearance later. I get the foot parts Icarus for Dark Mantis. I shoot melt crawler accidentally instead of blasting Pandamonium first when I was supposed to finish him off, damaging my time.

Optic Sunflower; the third trial could have gone better, but otherwise there are no big mistakes. I deliberately botch the trial number one, because I have no need for the metal generator, and the sub-tank is somewhat essential (or at least it should have been...) I hate Sunflower, he tries to make the battle longer at all costs. It's especially frustrating because the weakness costs so much in Weapon Energy. I used to balance it out with Zero's technique, but when you're supposed to actually do the run, guess what happens to Sunflower's courtesy.

Gigavolt Man-O-War is a pain in the rear. It's horrible to run unless you have loads of WP, which I don't have. On the other hand, it takes more time to buy the stuff than it gains in Man-O-War. Man-O-War is a piece of cake.

Avalanche Yeti. Another vehicle map. Yay. Fortunately, I discovered that the slow- down after a hit can be reduced by changing characters. You can also use it to speed up the overall speed, but it's risky. Plus, it can seriously damage the mothership battles. I take head parts Helios. Yeti himself didn't make too much resistance.

Dark Mantis. I equip the foot parts Icarus for the stage. I make my way to the generator room, put the power on, take the D Glaive and rush to the ending. I was a bit uncertain at the pits, as you probably can plainly see. Mantis was a bit too careful (or lucky) to my liking.

Gravity Antonion's stage is pure nightmare. I messed up with the switches big time. Energy means nothing to me, as you get to recharge it in the mid-boss anyway. After that things seemed to get better. Antonion fight was not that great.

Jakob. Up we go. Not much happening in the stage, so I just go with the flow. I scold Vile a bit and he flees. His desperation move takes forever. Alas, Drift diamonds didn't always find their way to the target, again hurting my time a bit.

Gateway: More or less the same as the previous boss battles. There is some mix-ups in the navigation part. Copy Sigma is ridiculously easy.

Sigma Palace went great. Lumine Mk.1 was a close call, but I didn't need the sub- tank at all, which was a bit surprising. Feel free to observe how Zero's Rasetsusen does massive damage to Lumine's second form. A double attack, and it's all over.

I left the recorder running a bit after I finished the run; consider it my victory lap.

X8 was the first game I speedran. After improving that run, I retired from the game. But because I had some downtime and PSP speedrunning was still a ways off, I picked this up. Going back to my roots.

This run was completed in a few large chunks of time. The first 9 segments were completed sometime before Christmas. Segments 7-9 were redone shortly after Christmas. And the rest was done during New Years. Literally, after the clock struck midnight and the ball dropped, I pressed Record. So don't ask me what I was doing while all of you were at Magfest. My plan was to have this run finished by daybreak on January 1st. That didn't happen cause I had to redo the final segment. Also, I actually stopped recording at about 8 AM, well after dawn. Oh well, I'm sure this is still one of the first runs completed in the new year...

This run beats the old run by over an hour. Well, that's because there was a rule change as to what 100% actually is in X8. Originally, I collected everything and bought everything in the game. Seeing that shopping takes up so much time, and that acquiring the funding for it is very difficult without the Infinite Metal Glitch (which is exclusive to the NTSC-U PS2 version). Not to mention you had to basically play the game twice to get literally everything. I asked about a rule change at least a year ago, but Uyama kept the old ruling because he was lazy. More recently, the staff decided to repeal that rule and use the game's definition of 100%. Namely, collect all Armor parts and Rare Metals. Not only does this eliminate the need to shop endlessly and go onto a New Game Plus (which cuts the time in half right there), but it also makes the category feasible for all versions of the game.

Interesting to note is that, even though the old run collected less things in its first half, this run bests that part of the run by 2 minutes. This is thanks to a new route, better strategies, and the Flying Rasetsusen Glitch. When Zero learns Rasetsusen, you can actually use the move to fly straight up or diagonally up. Hold Up (and a direction for diagonal), then jump, hold the special attack button, and press down. Some people might think this is a PC exclusive trick. Not so, cause the PS2 version uses both the D pad and the analog stick for movement. So I whip out the claw to perform the trick, using my index finger to press down on the D pad, and holding up on the analog with my thumb.

There are a few mistakes in this run. Little things, though. Nothing to really cry home about, I wouldn't think. Could 1:28 be feasible if everything is done properly? Probably. I'm not sure if it can go any lower, though. I won't go any further into detail. I'll leave that for the audio commentary.

Thanks to the SDA Team for doing their usual thing, and approving the new 100% definition. Without that, this run would never have been done. I also have to thank Cremator aka 65 aka Rokugo for being just about the only other person in the world who gives a shit about X8. A lot of strategies were borrowed from his any%, like fighting Rooster first. Also thanks to whoever found the Flying Rasetsusen Glitch. And thank you for watching.