Released in October 2003, this game takes place a year after the first Mega Man Zero. After nearly dying, Zero teams up once again with Ciel's Resistance Base. Ciel gave command of the Resistance Base to a reploid by the name of Elpizo, who is heading Operation Righteous Strike. Will the operation succeed with the help of Zero? 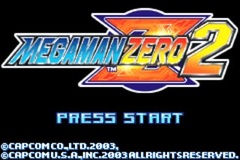 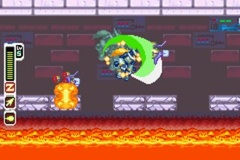 -Goal: Achieve S-rank every stage (96+ points)
-Single-segment
-No deaths
-Takes damage to save time
-Only one glitch used (spikes and lava don't hurt when you use the chain rod)
-A gameboy player + VCR was used to capture the run

If you don't know what S-rank means in this game then look at the first few questions in my Zero 1 comments for information. The only change in ranking is that Zero 2 allows you to take up to 10 more points of damage than Zero 1 before S-rank is out of the question.

I would like to thank McBAIN again (yeah, I thank him a lot) because his megazpeed run and his 53 second intro stage run (non S-rank) helped me figure out strategies and optimizations.

After a month and a half of recording this run is finally done. I am mostly satisfied with the end result, save two stages. Here are my overall opinions on how I did on each stage.

-Poler Kamrous: Fast, but I took a little too much damage.

-Panter Flauclaws: My run of the stage was good with only one obvious error, but my boss fight was a little slow.

-Phoenix Magnion: I got hit WAY too much, but I still got a good time.

-Elemental Golems: The beginning was a little slow, but overall a great run.

-Kuwagust Anchus: My run of the stage was fast, but my battle really sucked. I was hesitant and missed too many shots.

-Sage Harpuia: Owned, the only possible improvement is luck on the boss battle.

-Fairy Leviathan: Great run, only took one hit that had a negligible impact on my time.

-Burble Hekelot: Garbage, got hit by attacks I normally don't get hit by, missed an important chain rod hook, and I got the absolute worst luck against Burble himself.

-Rainbow Devil Mk2: Perfect runthrough of the stage. The boss fight was fairly fast, but I got hit an unforgivable amount of times (sorry!).

-Leviathan V2: My best run of this stage ever, the time I got here was a personal record. Plus I made that hard grappling hook jump.

-Harpuia V2: I miss a semi-important jump and I fall down once, but nothing run crippling. My boss fight went painlessly fast though.

-Final stage: I got hit a few more times than I would have liked, and I received some bad luck (phoenix magnion, elpizo), but I still managed to get a time under five minutes.

Specific comments:
-Yes, the in-game time is shorter than my Zero 1 S-rank, but the real time is longer. This game has many unskippable cutscenes which don't add to your in-game timer. Trust me, I would skip them if I could.

-I take more damage in this run than in my Zero 1 S-rank run. This game is harder than Zero 1, especially with all the one-hit kills (guess why it took a month and a half).

-I'm happy to say that the most damage I took was 15 points (final stage), meaning if I didn't collect any life powerups in the stages I still wouldn't have died.

-About my form choice, the Active form has a higher speed rating than Rise form, but it does not seem to speed up your dashes. I think it only speeds up your running. Since you can't combo slash with the Active form I chose the Rise form. It's easy to collect (just slash a bunch of enemies) and the third hit in the combo does six damage instead of the usual four, making boss fights slightly faster. I will admit I did not test forms for an incredibly long time, so correct me if I'm wrong with my form choice.

-My boss order might seem bizarre, but there is a certain logic to it. I picked Poler Kamrous first because she is an easy boss to kill. I pick Panter Flauclaw's stage second because it goes along with weakness order. I pick Hyleg Ourobuckle's stage third because by this time my saber is leveled up high enough to pull off the triple combo, which makes short work of him. I pick Phoenix Magnion last because I have already used my buster in the previous stages, which helps me get the buster leveled up in time for Magnion. You might think I could just use the shield boomerang and kill less enemies, but I need 51 enemies to get full points for the stage (yeah I killed a few too many) and the shield boomerang charges up too slowly to deal with Magnion effectively.

-My second boss order was mostly based on risk, which is ironic because the only stage I did badly in was the one I found the least risky. Harpuia's stage has the invisible platforms with spikes below, which is why I pick that stage first.

-I have done the intro stage faster, but the amount of random factors in the stage is incredibly annoying. I don't want to spend all day simply trying to get my time down to 56 seconds. I have run the intro stage constantly to make sure I get a decent time, trust me.

-The only hit I was supposed to take in Phoenix Magnion's stage was getting hit by the lasers jumping up the ladder (though getting hit by the lava block might have saved a tiny bit of time because I was able to stand on the block). Also, I will admit I was inconsistent when I was destroying the power reactors.

-I pause at the intro text in Kuwagust's stage because it sets the planes into a position that is optimal for jumping across. This has no effect on my in-game time because this is before the mission starts.

-I actively try to slash some of the enemies during the protect Ciel segment because it helps me level up my saber. Too bad the saber wasn't leveled up enough for Kuwagust.

-I got hit during the Kuwagust Anchus battle because of how charging up your buster works. Basically I shot the charged up ice shot, then immediately hit the button again to charge up my next shot. You always fire an uncharged shot when you hold down the button to charge. Since uncharged shots travel about the same speed as charged shots (possibly slightly faster), guess which shot hit.

-The hit I took in Sage Harpuia's stage was on purpose. I have an incredibly hard time dodging the lightning the turret shoots, and it does four points of damage. Since one point of damage is lower than four points, I decided to get hit by the soldier.

-You can prevent Fefnir and Harpuia from using their A/S-rank attacks a second time, but it requires some luck on their part.

-In Fairy Leviathan's stage those bombs count as enemies, which is why I take the time to detonate them. Now that I think about it, I probably should have killed even less dogs and detonated the three remaining bombs.

-I know my first Burble Hekelot fight was bad, but it was mostly due to bad luck. He wouldn't stop humping the wall! This caused catepillars to constantly fall down, which is bad for two reasons:

1) I either have to dodge out of the way or get hit by them (if one is going to drop down on me), and both choices interrupt my combo slashes.

2) If Burble Hekelot eats a catepillar he is either immune to one or two of my slashes, or he becomes invincible and rolls around the screen for about 10 seconds (which kills a run IMO).

After a while I started slashing at him anyways because there were too many catepillars for me to deal with.

-I know my Rainbow Devil MK2 battle stunk, you don't need to tell me. I swear I have never taken that much damage during that battle until now.

-Both of my Phoenix Magnion battles were good, but my second one took ridiculously long solely due to bad luck. He used his A/S rank attack twice, and I had to dodge the lava. Usually when I fight him the second time around he doesn't even have the time to use his A/S rank attack.

-Like last time, I was slow during some areas of the final stage because I didn't want to die. I died during that stupid multiple ladder area near the very end TWICE which is why I take forever there.

-I don't strike Elpizo's final form while he is shooting the little balls because I usually get hit before my slash comes out.

-Yes, there is some room for improvement either due to better luck or better performance, but I'm satisfied with the result. This is a tough game, and I'm simply glad to have the run finished. I am going to take another break from Mega Man games and concentrate on Revenge of Shinobi. Don't worry, I will still run Zero 3 someday.