Released in October 2004, Mega Man Zero 3 takes place two months after the events of Mega Man Zero 2. The Resistance follows a Dark Elf energy signature to a crashed spaceship where Zero meets Omega, and the mysterious Dr. Weil, also after the Dark Elf. With his trusty Z-saber in hand, Zero sets out to save the world from this new threat. 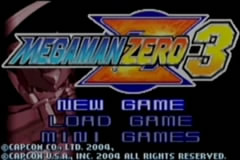 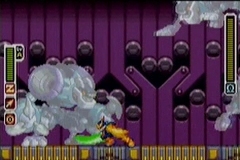 Segment 1 - Intro Stage - Not much to say here, possible 1-2 second improvent with perfect use of terrain glitch to avoid ice physics.

Segment 2 - Weapons Regeneration Factory (Devilbat Schilt) - I really screwed up here in not destroying all the cameras. Doing so would have kept me at an A rank for Mantisk. It would have lost me 2 seconds in this stage but with an A rank on mantisk you can manipulate him to continually do his A/S attack and defeat him much quicker (see computerbird's tas), so it would've been a net gain of about 3-5 seconds probably. Once Again, possible 1-2 improvement with perfect use of terrain glitch, this time to avoid junk physics.

Segment 3 - Aegis Volcano Base (Blazin' Flizard) - This stage went extremely well, I don't think any improvements could be made here, maybe not getting hit during the midboss.

Segment 4 - Oceanic Hwy Ruins (Childre Inarabitta) - Strangest boss name ever. This stage went really well, particularly this midboss fight, one blatant error where i jumped into a pantheon, but that had a negligible impact on my time.

Segment 5 - Old Residential Area (Deathtanz Mantisk) - A job well done for Zero. The timing and manipulation for the 2RKO on the midboss was a bitch and a half to figure out, but easy to perform after that. A possible improvement would be to manipulate the second round of the midboss first and the vice versa. Boss fight could've been improved, but not without A/S rank (see schilt stage comments) Also, I accidentally rakusaiga'd before the boss and took a hit, but other than that the stage went smoothly.

Segment 6 - Missile Factory (Baby Elves I) - 2 bosses without shared invincibility makes for a very easy fight. Stage went well overall, not much to say about it.

Segment 7 - Forest of Anatre (Hanumachine R) - Deja Vu time begins with the first of the Zero 1 throwback bosses. Took an unnecessary hit at the beginning, but I did really freaking awesome with the moving blocks, and the boss fight was perfect.

Segment 8 - Ice Frontline Base (Blizzack Staggroff R) - For some reason, dash failed me at the end of this stage and i walked for half a second. Staggroff dies faster than you can say LOL WUT? His EX skill given, The triple arrow, is a very strange skill, but is useful in against anubis because you can combo into a charge slash after the first 2 arrows.

Segment 9 - Twilight Desert (Anubis Necromancess V) - why it skips from Necromancess III in Z1 to V in Z3 is beyond me. the stage went smoothly, although it is possible to kill Anubis before he dissolves; sadly i've only managed this feat once. Also it might be possible to kill the midboss faster, and i grabbed the hanmarbo elf after the midboss fight to make the final boss 2nd form much quicker.

Segment 11 - Snowy Plains (Glacier le Cactank) - Riding the cargo transports is faster with those fat cacti on them, versus killing them and jumping on. Grabbed the quick charge head chip here. As for le Cactank, insert french joke here.

Segment 12 - Energy Facility (Cubit Foxtar) - Moar like Cu-bitch foxtar. This stage too gave me a lot of trouble. After the midboss the game intends for you to ride one of those metal beams all the way to the end, but with a little damage abuse you can get across the spike floor a lot faster. Got hit during boss fight and lost a second or two.

Segment 13 - Giant Elevator (Tretista Kelverian) - Yet another stage that gave me trouble. memorizing all those enemy placements on the elevator took a little while >_> and the elevator causes a lot of lag. Kelverian himself isn't a walk in the park either.

Segment 14 - Sunken Library (Volteel Biblio) - I hate this stage. Finding the 4 discs without missing at least one or two doors is nigh impossible, getting the good room to fight biblio in is just as unlikely. I ended up only missing one door and getting and okay room to fight biblio.

Segment 15 - Sub-Arcadia (Baby Elves II) - short stage, but still a bit difficult, only real problem was the early landing at the beginning of the stage. visiting harpuia went fine

Segment 16 - Weil's Lab (Final Stage) - All the boss refights went smoothly, though schilt and tretista could've gone a second faster, and yes I was supposed to charge slash at the beginning of the tretista fight, for some reason that manipulates him into doing what i want. I jumped at the end of childre because he(?) usually does the giant ice blade but for some reason he did rockets. The stage itself went pretty well, couple mistakes on the way to the second set of bosses. The final boss fights all went well, though about a second was lost on omega 2 and a bit more on omega zero since he used the light column once more than necessary. But considering all that can go wrong in this stage, 3'18 is a very good time.

Overall Comments: I think this run is very good, but I do plan on improving it eventually. I know sub 27:30 is possible, but with a couple of new tricks i just recently found, as well as a cyber elf trick from rolanmen, sub 27 will be my goal for an improvement.

Thanks to: All those who participate in maintaining this great website (nate, radix, etc.)
Rolanmen1 for his no-hit speedrun and help with different strategies
Computerbird's TAS gave me a lot of good ideas
Elpis_TK31 for pointing out some good timesavers
Anyone else who helped that I forgot to mention.
and you for watching :p