Created by Arthur "The Podunkian" Lee and released in December, 2006, Merry Gear Solid: Secret Santa is a Christmas themed tribute/parody of Hideo Kojima's series of stealth games, Metal Gear, in particular Metal Gear Solid. The player assumes the role of Saint Nick, codename 'Solid Santa', on a quest to deliver Christmas presents to a home without being discovered by the anxious kids. What follows is a lot of stealth and a lot of humorous dialogue, and several things from Metal Gear make an appearance - including the classic cardboard box. 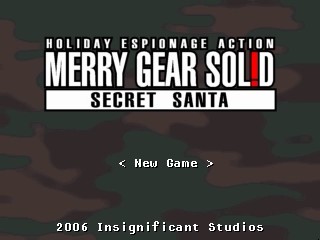 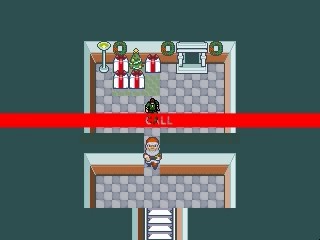 I'm not really sure what to write down here for comments since the run is straightforward, short and self-explanatory.

Perhaps the only thing worth mentioning is that the Gift Box has a big advantage on the level with the coal (The sixth story) since you can just keep on going without stopping (And also, using the Gift Box won't cause slower movement than without). When a kid spots you with the Gift Box, he'll just go "Huh?" first, which enables me to just keep moving.

Possible improvements would be a tiny bit faster execution of stuff (Moving when a guard turns, selecting an item etc.), but everything has been done pretty optimally.

Oh one thing, too bad the credits music sounds a little bit overpeaked :/

The reason is because the voices are softer than the music/sounds, so I turned up the volume a little bit (Not sure why actually since there's only some talking after the credits...), and apparently a little bit too much.

Well, that's about it for comments :P Enjoy the run.