Relased in December of 1993, Metal Combat: Falcon's Revenge was one of the few games released for the SNES's SUper Scope peripheral, and of those few one of the only ones generally considered to be worth owning. Players weild their large, unruly plastic bazooka and take aim at a wide variety of enemy mechs called Standing Tanks in an attempt to gun them down before they can do the same to you. 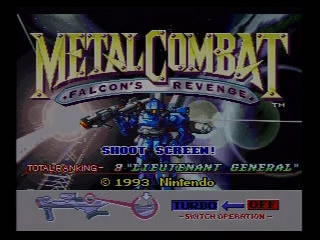 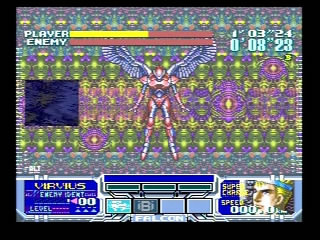 Metal Combat has always been one of my favorite games and one that more than makes owning a Super Scope worth it. I remember when I first played the game I was just struggling to get through it. Then I was trying to complete it without having to continue. So after succeeding at the last goal, what was there left to do? Well, logically the next step was to try to see just how fast I could complete the game.

Unfortunately, something I was well aware of was that there wasn't a wealth of information available. And any strategies I did find were just how-to strategies for defeating each opponent. Not to be discouraged, I took on the challenge and I found myself surprised at just how quickly I could defeat opponents. To this day I continue to be surprised. Every time I think I've found the quickest strategy for an opponent, I always seem to discover something else.

This run is a result of that fact as it's actually the second segmented run with the ST Falcon that I have submitted to SDA. When I did my first segmented run, it wasn't perfect, but I thought it was pretty good. I went ahead and submitted it. Then I began practicing for a single-segment run as I wanted to practice my strategies so I could execute them consistently. In the process I decided to experiment and discovered a strategy for a tough opponent that was not only easier than the strategy I had been using, but even quicker. I knew, at that point, that one day I would want to go back and do a segmented run with the Falcon using that strategy.

With my first segmented run going through the verification process, I moved on to running the game single-segment with the Falcon. I was using my new strategy in my attempts and couldn't help but think about the fact that once I had a successful single-segment run that it would have a different and quicker strategy than my segmented run against that tough opponent. I kept putting it out of my head, but curiosity got the best of me and I had to ask if any of the verifiers had responded to my run yet.

Only one verifier had responded. I declined to view his comments because I wanted to wait until the verification process was complete, but I had been provided a general idea of what the verifier had said. He had said the run was quite good, but could use improvement in a few places. I agreed with that thought and definitely knew that I would go back one day and improve it. Then a specific example was mentioned. It was Viscount, that tough opponent I'd developed a new strategy for. That thought struck me and it was because not only did I know it could be better, but I had done better when attempting my single-segment runs. I then knew I had to go back and improve on what I'd done, regardless of whether my current run was still good.

So, driven by the need to improve upon my first segmented run I took up my Super Scope and took on the role of gunner again. My first segmented run had taken me a week to finish, but with the fire lit inside of me I completed this segmented run in less than six hours. More importantly, though, I had succeeded in my goal and improved on my first run by 7 seconds. Not only that, I had also bested my times over the first run on all but three opponents and set new personal bests on seven of them!

So how did it all play out? Keep reading to find out, but first some important thanks and notes about this run.

The method necessary for running Metal Combat in segments seems rather unconventional. The game saves your progress when you're on the map screen, at the "Ready?" screen right before a battle, and when you fail a battle. However, the minute you start the battle your data is erased. So in order to retry an opponent it is necessary to purposely lose the battle to save your data. This results in the following:

Hopefully that will help explain anything that might look strange as a result of running the game in segments.

Everything went as planned. This was also the second of three battles where my time wasn't as quick as my previous run. In this case I was behind it by .29 seconds.

This battle went better than I thought. I'm particularly pleased that I managed to properly time my shots to destroy the snakes virtually as soon as it's possible to. I was worried slightly about the timing of my bomb, but luckily it turned out fine. This time was a little more than 2.5 seconds faster than the previous run's time.

Bombs usually don't pack much of a punch, but I was surprised how much of one it packed in this battle when I first took the suggestion to use it as I did. That must be some weak point.

I'm really very happy with this run. It's 7.11 seconds faster than my previous run and I feel like the quality of the battles is a lot better.

Thank you to all who watched and to all who read through all of my comments.

I really enjoyed running this game and hope you enjoy this run!

Note: Like with my Falcon segmented run, I end up with more items than I would normally have. I should only have bombs throughout, so I only use the bombs and never bring anything else into each battle.

I had a lot of fun with this run despite the Arachnus and Virvius frustrations and hope it shows off really nicely the devastation the Tornado can cause.

Thanks again to Mike Uyama, Nate, Strymon, the staff and runners of SDA, and, of course, my partner.