Released in November 2001, Sons of Liberty is a complex espionage thriller in which Solid Snake and newcomer Raiden must rescue the President from a terrorist group known as Dead Cell, lead by Solidus Snake. 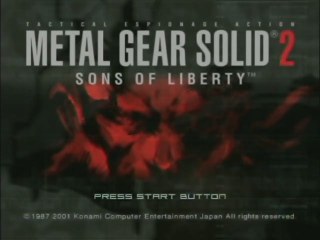 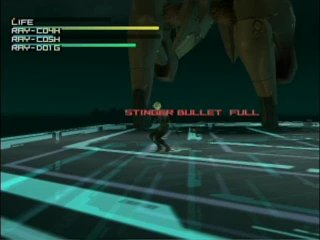 Runs on the main game:

Runs on the Tanker episode:

This run was done using the no gameover on discovery option, and damage is taken to save time in places. As such, it's not meant to compete with Big Boss runs like Takeshi's.

There are a few differences between the US and Japanese versions of the game which affect the outcome of the run. The segment where Ocelot is walking towards you (42:29), ends after the 10 second countdown, while in the Japanese version, it ends as soon as you equip the weapon. The section where you need to locate the Nikita missile launcher (52:54) differs as well, with the launcher being in a more favorable position in the US version. Several cutscenes that are skipable in the Japanese version are not in the US version, such as the shot after you upload the pictures to Otacon (10:37)

The run is 1:37:37 by the game timer, which varies from the realtime clock by several minutes.

The following is a speed run for MGS2. The speed run is only for the Tanker episode.

Firstly I would like to thank both Nate for transferring the run from VHS and Radix for accepting the run. Without them you wouldn't be able to view this run, or most other great runs for that matter.

Firstly I want to point out that this run was on the European Extreme level (and I'm a European too, England in fact). The speed run is a perfect speed run. By this I mean there are no alerts, no saves, no continues, no rations (Even though you can't collect any on European Extreme) and finally no damage. The major differences in gameplay in Euro Extreme compared to just Extreme include guards having longer fields of vision, better hearing, more damage taken, and more guards in some areas. Firstly I want to point this out; this run is not a copy of Takeshi's fantastic MGS2 speed run. I didn't copy his route in any way; in fact every screen is different. I think, although I can't confirm, that my tanker run is 10 seconds faster than Takeshi's run through the tanker part.

As for the run itself I feel it is the best I can do. Some screen had to be changed completely because of the difficulty level. The Semtex control panels in the engine room had to be shot without climbing onto the box thing. The Olga fight could be faster but my chosen path is quick enough I feel. I use various speedy techniques such as shooting and rolling and freezing and leaving them. Pay heed to the great guard fight in the Starboard which also looks great. Also note the amount of times I leave guards in rooms with their hands in their air, pure hilarity.

I am totally in love with MGS and will continue playing and trying to run them for as long as possible. Overall this run for me is perfect in every way, although I may be able to knock it down to 10:30 I am delighted to have done it. I have no plans to do this again or the entire game.

Thank you and enjoy!

I've been working on speedrunning MGS2 with dog tags on SDA for well over a year, and as a result I've spent way too much time in the Tanker tranqing guards for their bits of metal. Shortly after recording a segment of that run, I thought to myself, "Hey, why don't I go beat that old Tanker tags run?" I'd never even considered SS-ing the Tanker before, but all that time spent failing miserably paid off - I was moving my completed run to the PC about half an hour later.

I chose to use Big Boss rules, as it's what Adnan Kauser used in his run, and it's what I was comfortable with regardless. I don't think I'd be able to go any quicker if I was allowed to kill, anyway.

Anyway, onto the run itself:

In Deck A Lounge you see that you get a lot of leeway when holding a guard up. I take the opportunity to take out the other guard.

Deck B looks slow as I have to travel a lot, but I can't find a faster method. I take advantage of how long the guards take to realise you're not there, by legging it out of the area. This can be used to save bullets, but I don't actually need to do it as long as I don't go crazy.

The strategy for dealing with Olga came from a discussion in the MGS2 Big Boss topic here at SDA, where we found a Japanese player called AnonymityHope using a similar strategy (and a better one) that we couldn't reproduce. This is the best strategy I could come up with; I get it right most of the time so I've got no complaints:

In Deck B I take care of a guard by shooting him with the USP. Even when kills aren't allowed, the handgun is a useful tool for getting past guards. I wait for the guard to see me, then shoot him while advancing, which gives me time to roll through him. I use the trick again in Deck A Crew's Quarters, but mix in an M9 shot to tranq the guard - any knockdown after an M9 to any part of the body sends them to sleep.

The Engine Room is a pain:

I make a bit of a mess of the first guard in the port corridor, but the rest of them are fine. The timing for the second guard can be worked out by the music, but I hang back a little to make sure I don't get seen.

I'm not all that happy with the Soldiers battle. I was really jumpy because it was late in the run, and the guards that position themselves at the right can hit you really quickly - plus the gun in your hands obscures your vision of that area - so I missed a few shots from ducking down unnecessarily. I can't take any damage after Olga if I want to get across the hangs in the Holds; unless I'm prepared to use rations, which I'm not.

Hold 3 is all about timing:

In Hold 2, the gratings can only be heard by one Marine. I make sure it's the one I'm already holding up. After rolling over the gratings, I try a pop shot on the Marine at the back, but I miss. I lose a few seconds in this area.

On the way back, I turn the Marines around with the projector, and then hold a couple of them up to make them give me more space to run through. I mess up with the second hold up, but it doesn't hurt. I have to stay close to that last Marine, or one of the ones I turned around will notice me and come to investigate.