Released in March 2003, over a year after MGS2, Substance contains everything from Sons of Liberty plus: 350 VR missions, 150 Alternative Missions, 5 Snake Tales Involving Solid Snake, Casting Theatre, Boss Survival Mode and Skateboarding for Snake and Raiden. 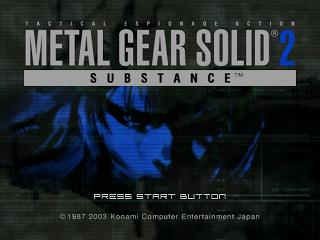 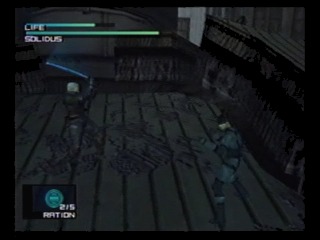 Runs of the Snake Tales missions, without tranquilizer:

A few notes beforehand:
-Aims for Fast time
-No unnecessary alerts (some are mandatory in B, C and E)
-does not get the best ending because that would require the Tranq gun
-each mission done without a Continue, Save or Retry

the Snake Tales are basically "What if" or "Twilight Zone" missions. they will make sure you fight all bosses except for 1 or 2 (Fortune and Vamp Sniping... and i suppose the Tengu's, but thats somewhat debatable). The last one is notorious for having people at GameFAQs say that the writers were "on crack" when they did this. just try and keep an open mind.

-in Strut A, when the guard notices me, note that this is not an alert because the word ALERT did not appear in the upper right hand corner.

-Strut F, where i throw the Guard; i had tried groin punching him but had always been too slow. and rolling into them at this point would have caused an almost immediate ALERT instead of CAUTION

-after meeting Ames, you have 2 major options: kill Fatman and end this or visit the Core and try and save people. i opted for the latter to show the actual gameplay.

-coolant save me more times than i care to remember.

-B1 provides the randomness... Jennifer is rarely in the same place twice. and for this simple reason, the Tale length may be increased or not depending.

-also note i am very careful around the hostages because some of them will actually try to trip you. ungrateful huh?

-ok, now we go down and disarm the bomb. the hardest part is depth perception when it comes to the guard who goes down the east hall. punching him alerts another guard so i had to use coolant instead.

-the real pain in this is coming back from saving the hostages... those places on the bridge will still be out from where you made your previous trip.

-Fatman could have been handled better. i still cant believe that i actually forgot to equip the gun or change equipment. im generally really good with this game up until the boss battles.

-painful with a capital P. mainly because there are not 1, but 2 shootouts. and that little brat Emma needs to be taken care of.

-taking the lower route is necessary on the DE bridge because of the guard above.

-Mid-Boss 1, shoot-out. this is generally ok. the only annoying part is the guy on the far right. and yes, i enjoy tripping Emma. i wanted to punch her as well but opted to merely knock her over.

-id have a feeling that i get too much unnecessary ammo now... and then Snake falls on his face as he tries to race up the stairs... :\

-i try not to waste M9 ammo because it is indeed precious.

-in Strut F, getting caught is an automatic Game Over. hence me taking it slowly.

-and there is a way to make Emma stand up quicker but i always end up knocking her over.

-Mid-Boss 2, infinite shoot-out. the guards here will NEVER stop coming at you. the way i got through it was a fluke, but the strategy endures none-the-less.

-Harrier battle. i really wish this could have gone better. oh, and if you use the binoculars, you can see that thats NOT Solidus in the plane... its 2 guards. Solidus' voice was just used... because... :?:

-and i accidentlly shot at Otacon... oops.

-you are SOLID SNAKE! without the mullet... this could very well be my favorite one (simply because i FINALLY get to put a bullet through Meryl's head and its not a bad thing).

-ok, opening... these guards have heightened vision due mainly to the goggles. not a fun time.

-running up the Stairs into that one guard over and over... hahaha...

-not an Alert when i fire off the USP/Socom because no ALERT in the upper right hand corner.

-hope you enjoy Snake's hand jive in the Engine room.

-the last guard i deal with is generally a pain because one false move and the one below us gets alerted, screwing up everything.

-the suppressor is gained for the trip back through the Engine room. and what a trip it is... the M4 became my favorite rifle in the gun once i played this through.

-Mid-Boss, shoot-out. Familiar, i know. im most proud of rushing through bullets here and not being hit once. I AM MGS1 SOLID SNAKE!!!

-Meryl battle; well, it goes decent enough, but i know this (along with EVERY Boss Battle) can be improved upon.

-and now, you're Plisken... but sorry, no Tuxedo (for some reason). this one starts you off with NO ammo and 2 guns... Semper Fidelis :)

-i always find Strut D funny because i kill 2 guards with no suppressor and all the idiot in the north can say is NOTHING HERE...

-i rolled in front of an enemy... and i wonder if it can get any more embarrassing at this point... oh wait, we haven't seen the Vamp battle yet, have we? :)

-Vamp... i never could get the punching down, so i opted to throw everything but the kitchen sink at him

-welcome, you're now on acid. the most random thing in this one is capturing an image of Gurlugon. Battling him is just a joke anymore.

-anyhow, i skip as many VR missions as possible because theres nothing new there.

-and this one jumps all over the place at the beginning, so im sorry if theres any confusion.

-Mid-Boss 1; shoot-out. now this one is a pain. from 2 opposite sides you get bombarded with little to no cover. and im not even sure why i hang at the end of that battle anymore.

-more VR... these have to be done. dont ask why i used the M9 in the eliminate all mission... i honestly couldnt tell you at this point...

-Raiden's missions... these can be exited ASAP because they only serve to lengthen gameplay.

-Boss 2: Solidus. i am NO Takeshi. that and i couldnt help but notice that i actually DID hit Solidus and it did nothing... :(