A 1994 SNES-only title by Origin, this part-platformer-part-3D-shmup may appear perfectly ordinary to some, but within lies a dark secret: the controls are imprecise, the gameplay imbalanced, weird, and overly punishing, and there isn't any real cause to play a second time through. Still, you at least got to melt into an awesome puddle of metal and slide through a pointlessly orthogonal pipe into adjacent rooms instead of taking some boring old door (sheesh!). 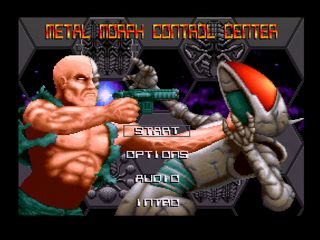 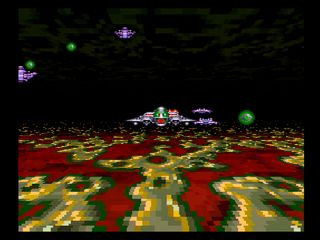 So.  I said I wouldn't do a run of this for SDA, but I lied.  I kind of felt bad that, although I routed the game 4 years ago, I didn't have a single recording of a completed run except for the AGDQ 2013 run.  I went back, did some fine-tuning on the run, and did attempts until one of them finished without needing to do any backtracking.  That is all I required of this run.

Metal Morph has a long list of problems.  The platforming is extremely clunky, there is no way to kill any threats without the homing rockets, but most importantly, the shmup sections are absolutely terrible.  It is impossible to shoot offscreen enemies, and they can choose to not come on screen for as long as they please.  The only ways to consistently hit enemies in these sections are to use either use a smart bomb (randomly awarded) or hope you have a ship that can fire homing missiles.  The boss fights are also absolutely terrible because your ship moves too fast to hit the targets with any kind of accuracy, the targets have tiny hitboxes, and enemies are constantly firing and attacking.

As you complete the platforming sections and collect morph pods, you unlock additional ships.  You can transform into any of these at any point in the shmup sections, which is honestly a really neat mechanic.  Once you unlock a few ships you can actually begin to strategize and take advantage of different movement speeds, fire rates, or secondary weapons.

This run was done on easy difficulty for 2 reasons: boss fights and morph pod locations.  I used to think that hard mode made the platforming sections impossible because of the enemies' reaction times.  I found out that that isn't actually the case.  Hard mode is impractical because the boss fights take literally 5-10 minutes longer...each fight.  The bosses continuously spawn enemies, but the fire rate of hard mode enemies is outrageous.  They never stop firing bullets.  This means we can never take any amount of time to line up in the proper line to hit the boss, and we can't stay in one place for long enough to fire bullets at the weak points even if we WERE in the proper line.  If the bosses are possible to kill at all, it would require literally 5-10 additional minutes and really really good luck.  Nothing about this is skill-based or interesting.  The other issue with hard mode is that the morph pods are placed in locations in the levels that force backtracking.  Again, these aren't placed in interested or challenging locations.  They simply force you to go through the same 4 minutes of pipes and monotonous platforming a second time.  I feel that easy mode has the best overall flow and produces the best speed run for this game.

There are loads of bad mistakes and some costly decision-making errors (such as trying to save a smart bomb for a later wave, but then dying and losing it), but the main goal with this run was to not miss a single large jump.  In most of the platforming sections, there are 2-3 jumps that are extremely precise and send you back to the beginning of the stage if missed.  This is literally a multiple-minute mistake in every instance.  While there were some minor platforming issues and necessary hesitations to ensure safety, I didn't miss any of the important jumps.

The secondary goal was above-average boss kills.  There are three bosses, and they're a pain in the ass.  They have 3-5 weak points, and as each weak point is destroyed, the boss begins to move around faster.  While the boss has all weak points intact, I try to damage each of them as much as possible without destroying them so I need very few hits as he starts to move.  The boss fights in this run were well above average, but still not my best.

Overall, this run is several minutes faster than my initial estimate.  It can certainly be improved, but it is not a terribly interesting game to run.  A clean run of the route is displayed here, so any interested party is welcome to use it to try to improve it.  I will certainly not be the one to do it, though.