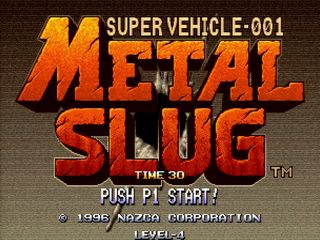 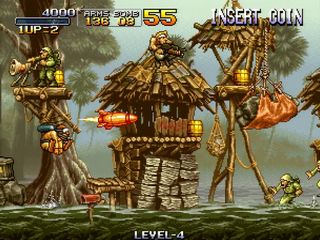 Runs on the PlayStation version:

Runs on the Neo Geo version:

Well here it is, the first Metal Slug speedrun for SDA. This run probably contains more mistakes than I should have accepted, but it's still one life and the load times were pissing me off. This run could probably be improved by at least 30 seconds, which is a lot for a game this short, but I simply wanted to release a run before I went to Japan.

-Overall my runs of the first, second, and fourth stage were really good, only containing minor mistakes. My runs of the third, fifth and sixth stages have obvious flaws that could be improved.

-If you're wondering how I threw bombs so quickly at the first and second boss, walking forward into an object allows you to throw bombs more quickly than you normally could. This trick doesn't work on any of the other bosses (bad positioning or they kill you on contact).

-My Allen (third stage midboss)battle was kinda slow mostly due to bad luck. He wasn't staying below me very often and whenever he jumps onto the platform second from the top he always shoots instantly, preventing me from getting above him. I threw some grenades to make it faster, but that led to another mistake...

...which was failing to kill the third boss with my initial onslaught of grenades, most likely due to the grenades I used against Allen.

-I'm almost positive taking the time out to collect 20 grenades in the fifth stage is less than the time it would take without those extra 20 grenades to destroy the boss.

-I jumped just a moment too late out of my slug during the fight with the fifth boss, preventing me from unloading cannon shots and/or slug crashing into the boss.

-There is one huge mistake in the last stage and that is failing to get a shotgun while I was on the bridge. If I collected a shotgun during the area cluttered with tanks and soldiers (right before you go into the water), it would have shaved off at 10-20 seconds to destroy all the vehicles.

-There are two other big mistakes in the last stage. One is not having enough bombs for Morden. Yes, I have 40 bombs, but usually I have 50+ bombs for the fight. One of the prisoners holding bombs went right instead of left, which caused him to fall into the water (this never happened to me before). The other mistakes was being incredibly dumb and timing an easy jump too early, causing my slug to get damaged by a missile.

I think this run is still pretty good even with all the mistakes in it and look out for more Metal Slug runs in the future.