Released in June 2000 Neo-Geo, Metal Slug 3 is considered the best and hardest Metal Slug by most fans. Introducing multiple paths, interesting new slugs (an elephant that can breath fire, anyone?), and more absurd enemies (zombies and mutant plants), Metal Slug 3 brought new additions to the Metal Slug series while still emphasizing destructive shooting coupled with explosions. Like the previous three games, the plot involves Morden doing something evil, but anyone who has played 2 or X knows the aliens are the true villains. Furthermore, 99% of people who play Metal Slug games don't care about the plot and care more about shooting stuff, dying a ridiculous amount of times, and swearing at this game for being really, really, hard. 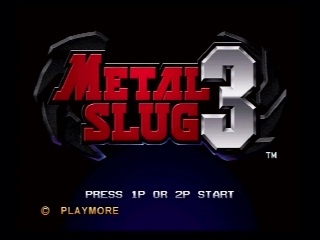 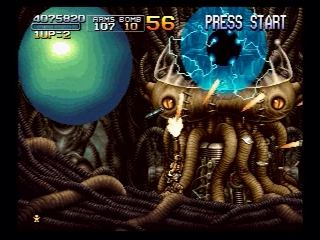 Difficulty note: Normal mode in Metal Slug 3 for PS2/Xbox isn't allowed because it lies between easy and normal in Metal Slug Anthology.

-Goal: Complete the game on one-life.
-Single-segment
-Played at the default arcade difficulty (hard, which is not the highest difficulty)
-No programming errors abused
-A Playstation 2 + DVD recorder was used to record the run, thanks go to Nate for capturing.

A: The arcade version of Metal Slug 3 doesn't have vulcan fix, and being a purist I didn't use vulcan fix in my run. I don't think it would save more than a couple of seconds anyways.

Q: Speaking of hard, why didn't you play Metal Slug 3 on the highest difficulty?

A: For some reason, hard difficulty lets you kill most of the enemies without being delayed for a long period of time. If I chose a higher difficulty I would end up using more grenades on normal enemies and less on bosses, making the run longer. I know it sounds lame, but it makes the run look smoother and I'm used to playing this game on hard. Also, the fourth boss's pinwheel attack becomes nearly impossible to dodge on very hard.

Q: Are you sure you took the best path choices?

A: Yes, the best path choices in this game are very obvious. All of the other paths take much longer (sometimes even twice as long).

Q: Why did you choose Marco? He's ugly.

A: I know, but it's worth it when I can kill hundreds alien Marco clones in the end. Plus Fio is the best character, you know the glasses are hot (and she doesn't have the fugly Metal Slug 5 picture).

Q: Your luck against the second boss sucked. Why didn't you restart?

A: After you spend a year (on and off) on a game this hard, you stop caring just a wee bit less about luck factors. Many of my runs have ended at the first or second stage. If I ever try to improve this run (ha), I'll try to get better luck.

Q: Why do you waste your grenades before you fight the fourth boss?

A: It is impossible to hit the fourth boss with grenades.

Q: Why do you try so hard to dodge the rocket launcher while fighting the UFOs?

Q: Why did you crash the spaceship when you were inside the UFO?

A: The heavy machine gun saves time against the hoop-shooting bots.

Q: Are you sure that is the fastest strategy fighting the cocoon?

A: It is so easy to die during the cocoon fight that I don't care if it is the fastest strategy. I could have been burned to death easily by the zillions of alien Marcos running around. With that being said, I think my cocoon strategy is fast because I can kill the Marcos while still firing at the cocoon.

Q: Why didn't you collect the extra ammo and the rocket launcher when you were fighting the final boss? They were so close to you!

By the time I wanted to collect the rocket launcher (I only had about 3 flame shots left), the icon disappeared. I thought I would have been able to collect more weapons fighting the boss, but a combination of bad luck and my own stupidity prevented that from happening.

Q: You didn't need to jump inside the tank each time the final boss fired orbs at you (I'm aware this isn't a question).

A: True, but I was very paranoid about dying.

One comment I must make before going further. I am tired of people thinking Contra III (the hardest Contra game) is one of the hardest games ever, when Metal Slug 3 (the hardest Metal Slug game) is much harder (in terms of beating the game on one-life).

Metal Slug 3 is longer, has more randomness, bosses don't die as quickly, and the hardest difficulty is considered impossible (or nearly impossible) to beat on one life. Whereas in Contra III, the game moves quickly, but there isn't much randomness. If that doesn't convince you, Contra III took me 10 days (this includes both practice and recording), Metal Slug 3 took me over a year.

-To be honest, I didn't make many mistakes throughout the run. I had bad luck in some spots (second boss, final boss), which is the main weakness of this run. I admit I could easily shave 30-40 seconds if I had a better fight against the final boss.

-The first stage went well, my boss fight was kind of slow since I slug crashed too early, but nothing that cost me more than a few seconds.

-The only mistake I made in the second stage was taking a while to destroy the last helicopter. The boss fight could have been about 10-15 seconds faster with better luck.

-Nothing goes wrong in the third stage. I was even able to unload all of my grenades into the boss quickly.

-Like the third stage, nothing goes wrong in the fourth stage. I was very lucky getting a laser while fighting the boss (the prisoners usually give heavy machine guns).

-The only thing that slowed me down while I was playing Marco in the final stage was Morden using a couple of attacks that forced me to jump off of the anti-air gun.

-I should have unloaded all of my missiles on the giant UFO while flying in space. Other than that, I didn't make any mistakes during the whole space flight section.

-I had decent luck picking up an enemy chaser in the crawler area. The three weapons you can collect are drop shot (worst), enemy chaser, and laser (best). I'm not always standing under the large crawler robots while firing because their remains can crush you.

-My luck against the giant brain is pretty good. The battle would have ended faster if the laser appeared sooner, but I didn't have to resort to the pistol.

-The super crazy, intense final scene before the last boss goes very well. The only mistake I made was getting hit while I was in the slug walker (and therefore losing a gun).

-I'm not going to lie, my fight against the final boss could have been much better. After investing so much time on this run, I really didn't care how long the battle was, I just wanted the run to be over.

Well that's the last of my Metal Slug runs for now. That is, until Metal Slug Anthology comes out with a proper conversion of 1 and X.