Released in 2002, Metal Slug 4 is considered by many to be the worst of the Metal Slug series. Tarma and Eri were replaced by new characters Nadia and Trevor, who were not well-received. A new scoring system and a new weapon were added, but that wasn't enough to attract fans who were hooked on the third game. Unlike the last two Metal Slugs, number 4 is mostly mass-slaughter of soldiers and tanks, making it similar to the first game in that respect. 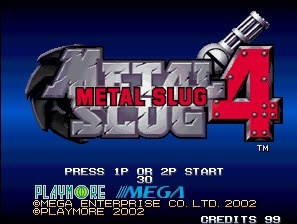 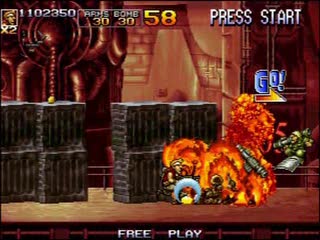 Did you really think that Mike is the only one that can play Metal Slug games? You were right! This here, is a poor attempt of trying to run a arcade game by me. Btw, thanks radix, nate, djgrenola, and mikwuyma. Especially Mike because if not for him, there wouldn't be anyone to annoy with crappy MS runs. Bless you Mike. ;)

If you want to know about all the small time savers, read Mike's comments for his hard difficulty run. I'm not sure if my where-to-throw-bombs choices are the right ones, but I at least try to make it look good (another failed attempt). Now about the mistakes:

-As you can clearly see, nerves took over me at some places. I died like six times in a row at the fight with morden's human form using Mike's strategy. That's why I've kept it safe and stood on my platform.

So after all, luck is a high percent factor for how fast you can complete a MS game. Regardless of the bad luck at every possible section, I had some good luck at the end of the first section in mission 6. I kept the /C/ all the way to the next section which saved some time.

I hope you won't like this run as much as I don't. But you'll see more of my MS skillness soon. Enjoy (not).

-Goal: Complete the game on one-life.
-Single-segment (would you expect anything else from me?)
-Played at Hardest difficulty setting (hard)
-No programming errors abused
-A Playstation 2 + VCR was used to record the run, thanks go to Nate for capturing.

A: The arcade version of Metal Slug 4 doesn't have vulcan fix, and being a purist I don't use vulcan fix (yes, I know it might save time against the stage 2 boss).

Q: What are the differences between easy and hard?

A: Hard mode has faster bullets, more bullets/enemies, and enemies take MUCH longer to kill. The patterns of the final boss are almost completely different due to either faster patterns, or more lasers on the screen at once. If you killed a boss faster in a lower difficulty than I did, that doesn't necessarily mean your method is faster than mine in hard mode.

Q: Why do you get inside so many vehicles? Aren't they slower?

A: Yes, vehicles move more slowly than your character moves on-foot, but usually you have less firepower on-foot then you do in a vehicle, and there are a lot of areas where you are forced to kill enemies before you can move on.

Reasons for each vehicle:

Stage 2 Missile Launcher: If you go on foot the rocket launcher wears out before you can even get to the destructible wall, and the extra grenades would be wasted on destroying the vehicles. Missiles pretty much tear through everything in a few seconds.

Stage 2 Tank: Allows me to go through the soldier infested area with ease. Also makes killing the second boss a lot faster.

Stage 4 Crawler: There are a lot of areas where you are forced to kill enemies before you can move on, and vulcan is more powerful than heavy machine gun (the only other choice). Also, crashing the crawler takes care of that big row of zombies before the third area.

Stage 6 Tank: The tank makes me safe from the crapload of enemies and bullets. The tank cannon takes care of the enemies faster than a heavy machine gun could. Furthermore, it lets me save ammo for the Allen fight.

Q: There are some areas where you don't move forward even though you can, why?

A: There are only three areas I can recall where I do this, two in stage 4, one in stage 5.

Stage 4 after the first two helicopters: You can't move on until you kill all the vehicles, and if you spawn the tank and the second set of helicopters together it simply becomes too difficult to dodge everything.

Stage 4 at the beginning of the top path: If I moved forward before killing the fat zombie on the top, five extra zombies would have spawned on the right side of me.

Stage 5 when I first get outside: If I moved forwards while firing my super grenade at the tank three soldiers would fire a set of weapons that is nearly impossible to dodge (rolling bomb, bazooka shot, and a rocket).

Q: There are some places where a bullet passed through you, why didn't you die?

Q: You seem to take time to collect weapons and/or grenades a lot, are you sure it's worth it?

A: Yes, I'm almost positive I have made good choices on all the weapon and grenade pickups.

Q: Are you sure you took the right paths?

Yes, the alternate path in the first stage gives you a crappier weapon for fighting the boss. Taking the alternate path in stage 3 not only takes longer, you don't get a flame shot, making the boss fight at least twice as long. The bottom path in stage 4 is at least a minute longer than the top path. Even though the path I take in stage 5 is forced scrolling, it's about 20-30 seconds faster than staying on the top, plus I get a super grenade to take care of the vehicles.

A: Yes, I know this is the most hated out of the Metal Slug games, but I like it because it still has plenty of shooting action and if you don't like it, then don't watch it. I am planning on running more Metal Slug games in the near future so no need to worry, this isn't my last. Anyways Metal Slug 5 sucks worse =P

-I used Nadia because pigtails are hot =P

Stage 1: Basically my run of this stage was nearly flawless. There is a mistake I made against the boss, but you're probably not going to notice it.

Stage 2: The only big problem here was the bad luck I received against the boss. Iron lizards are a terrible weapon against this boss because they only travel across the ground, unable to hit the boss. Fortunately, the iron lizards didn't start appearing until the boss was almost dead so it didn't cost me too much time.

Stage 3: Again, nearly flawless. Yes, I almost died against the boss twice. If you're wondering about the sawblade, it takes about a half-second for a hit to register.

If you're thinking the shotgun is more powerful against the boss, then you're wrong. The fastest you can kill the boss with the shotgun is when he shoots the three energy shots. With the flame shot I kill him before he has completed the sawblade attack.

Stage 4: The only mistake here was not having as much flame shot as I could have for the boss. Yes, my luck in weaponry against the boss was ridiculous.

Stage 5: I really, really, really hate the boss of this stage. Again, I managed to get really good luck in weaponry against this boss (usually it won't even drop anything).

Stage 6: This is the first time I reached this stage on one life in a single-segment run, so I was really nervous (my hands were constantly shaking throughout the final boss fight). I was being careful against the bazooka soldiers in the final area of the rapelling section because it's very easy to die there. The only significant mistake is towards the end of the stage when I'm in the tank. I momentarily forgot about the businessman holding grenades and ammo, but I don't think it cost me much time.

About the Allen fight, if he is on the lower platform I can't jump over to his side or else I will be shot instantly.

Final Boss first form: I couldn't hit the blue missiles, preventing me from getting 300 heavy machine gun bullets, but other than that no problems. The first time I turned around to shoot the missiles was purely out of idiocy.

Final Boss final form: If you have any doubts if collecting all those grenades was worth it, watch as I unload over 50 grenades into the boss and he STILL LIVES (once I unloaded 84 grenades and it didn't die instantly). There is a mistake I made with weapon usage, but I doubt it cost me much time. About the bouncing lasers, that is the only way I know how to dodge them, I really don't think there is an easier method.

-I think this my best run yet, and hopefully you will think so too. Don't worry, I am still working on the Metal Slug series so expect to see more Metal Slug runs in the future.