Released in November 2003, Metal Slug 5 tried to revive the stagnant series by replacing all of the green soldiers with generic-looking terrorists and Nazi look-alikes. Unfortunately, making the gameplay as action-packed and intense as the previous games took a backseat as the first stage demonstrates with its auto-scrolling rafting. The 'plot' has the Metal Slug team trying to stop a random terrorist group from doing something evil, and as always you have to destroy everything in your way to stop the random terrorist group. 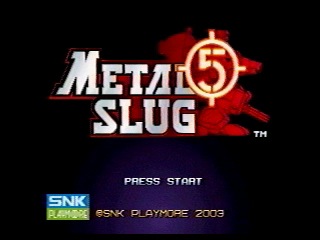 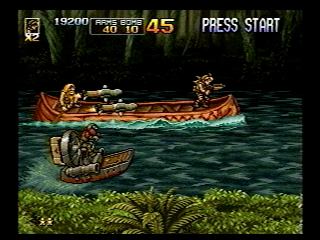 -Played at hardest difficulty
-no deaths
-I used a playstation 2 and a VCR to record this run (yeah I'm behind the times, give me a break)
-Thanks go to Nate for capturing.
-Thanks go to Remukhan (sp?) for detailing how to kill the final boss without dying. Without him I don't know if I could have managed to complete this run without dying.

One thing I should mention. This run only took 8 attempts. I think it still looks well-optimized with a only a couple of minor mistakes, with the exception of a big mistake at the very end. If the run looks sloppy to you, the lack of attempts is probably why. If the run looks too refined for only 8 attempts, I did practice this game last summer for at least a month and a half, then practiced 2 weeks before I started recording.

Q: Why do you sometimes crouch while firing your weapons?

A: You can fire faster while crouching.

Q: How do you cancel weapon switching recovery when you run out of ammo?

Q: Is jumping constantly faster or is sliding canceled by jumping faster?

A: I think jumping constantly is slightly faster because there is a little pause when you cancel a slide with a jump. This is why I jump constantly when I want to move, though I sometimes slide for good positioning.

Q: Why don't you destroy those boats in the first stage or the hovercraft in the second stage?

A: The boats are a timered event; it doesn't matter how many I kill because I still have to wait a predetermined amount of time. I am better off saving my chaser ammo for the columns later in the first stage. It doesn't matter what I do to the hovercrafts in the second stage because I have to wait for them to fly off until I can move on. In fact, if I shot the last hovercraft down, it would take longer because the hovercraft would slowly float upwards then fall down.

Q: At the end of the first area in the second stage you start shooting heavy machine gun for apparently no reason, why?

Q: After you destroy the first tank in mission 3, you move left to run over some enemies, was this necessary?

A: Yes, if I didn't kill those enemies, I wouldn't be able to move on.

Q: Why don't you stay in the slug for the Mission 3 boss?

A: The game automatically kicks you out of the slug before you fight the boss. Slug crashing allows you to kill two robots without wasting any time.

Q: Why do you crash the sub in mission 4?

A: It doesn't take much longer to kill enemies with the pistol, and the bombs I pick up are better spent on the boss than using torpedos to kill enemies slightly faster.

Q: Why didn't those jellyfish kill you? They were REALLY close.

A: They should have killed me, I got lucky.

Q: Why do you ride the spider slug? It's very slow.

Q: Why do you take time to kill maggots when you're fighting the elephant towers?

Q: Wouldn't dying against the final boss give you more grenades and allow you to kill him faster?

A: Yes, but it looks sloppy and less entertaining. A run abusing the extra grenades from dying would fall under the death abuse category and be considered a separate run from mine.

Stage 1: Almost nothing went wrong here. There is a slight mistake right before the boss, but I doubt you will notice.

Boss: Went down quickly. I delay crashing my slug so I can be invincible when the tank shoots bullets, allowing me to shoot the boss without stopping.

Stage 2: This stage also went pretty smoothly. The elevator section was decent; I missed a couple of shots, but I also managed to hit multiple turtles with some shots. My biggest mistake in this stage was wasting a couple of seconds trying to dodge some bullets when I should have spent time killing soldiers instead.

Boss: There are one or two moments where I randomly stop shooting for half a second, I don't know why that happened. My luck against this boss was good, but not great. The boss only performed the turret attack once. I slug crash when the boss is about to leave the screen for the fourth time because I can't hit it when it's off screen anyways. In addition being outside my slug allows me to use up all of my bombs, allowing me to kill the boss more quickly.

Stage 3: There was a slight screwup when I'm on top of the boxes trying to shoot the terrorists down, but other than that, the stage went very smoothly. I even managed to skip some of the mechs in the elevator section of the stage.

Boss: Other than being a complete idiot and turning left for half a second while firing, this boss battle went fine. I managed to pick up a machine gun while fighting the boss so I'm not complaining.

Stage 4: My path in the beginning of the stage might look weird, but it gives me 20 grenades, saving a lot of time against the boss. I think my use of dropshot is justified when you see how quickly I destroy everything with it.

To be honest, there is probably a quicker method of getting through the group of shield and bazooka soldiers, but I decided to sacrifice a second or two and go with a reliable method.

Boss: This should explain why I stockpile so many grenades. I let 45 grenades loose on the boss and the boss still stands. The boss fight went very well, I managed to constantly shoot/throw grenades at the sub for the majority of the battle.

Personally I think the stage went exceptionally well, other than a missed shot in the factory area there really weren't any mistakes.

Dual Elephant Towers: I shoot each tower with the shotgun five times. If I shot either tower one more time with the shotgun it would be destroyed. This is actually a bad thing because destroying the towers seems to prevent a dual machine gun powerup from spawning (or at least decrease your chances because the amount of maggots spawning is halved). I still kill maggots after I collect a dual machine gun because it is possible to collect two dual machine gun powerups (I have never been able to collect more than two). How I collected my second machine gun after destroying a tower I don't know, that has never happened to me before.

Final Boss: My strategy here was to constantly keep moving while firing so I could dodge the fireballs. Sometimes I veered off center to dodge the fireballs, which wasn't always necessary, but I was playing it safe (I was afraid this boss would kill many attempts). This is actually my biggest mistake in my whole run, if I stayed in the center shooting the boss more often, or had more dual machine gun ammo going into the fight (it is possible to have over 300 bullets, I had 234), I could have prevented him from going into another loop of flying off the screen, raining fireballs, then throwing his scythe at me (look at how many bullets it took to kill him when the skull appears on the screen for the final time). I think this cost me around 15 seconds.

I'm satisfied with this run, I don't think there are more than 30-40 seconds worth of mistakes/bad randomness. I don't think I'll touch this game again even if there is a lot of room for improvement because it is the worst out of all the Metal Slug games. Hopefully I will have a successful run of Metal Slug 3 someday.