The game that started the Metroid series was released in August 1986 and follows Samus Aran's first encounter with the deadly Metroids. With no internal map, this is a game you were sure to get lost in. If you manage to finish the game in a fast enough time, you learn that Samus is a woman; the game manual was lying! 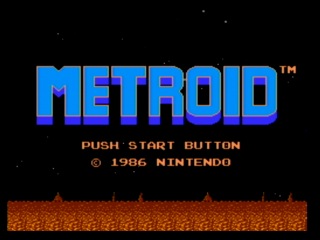 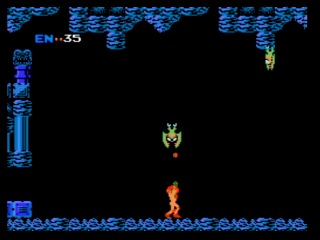 Unbeknownst to anyone in the speedrunning scene, I started working on the any% run again back in April 2012 (inspired by jprophet22, so far my only rival on any%), and recorded a 16:26.7 (timed from character control) in May. Not entirely satisfied with this time but also fairly bored with the game, I shelved the recording, took a very long break and recorded two other speedruns: Pitfall II and Super Mario Bros. 2. In February 2013, I resumed research/practice of Metroid, determined to at least beat my old Twin Galaxies time of 17:15 by a full minute. On March 6th I got a 15:55.9, on March 13th a 15:50.2, and on March 16th a 15:36.2.

Thank you for watching, and please feel free to visit my Youtube channel:
http://youtube.com/cakmusic
Thanks to Josh Helton for the Metroid cart and NES controller.

0:29
I was kinda tired and the d-pad messed up for a second.

6:33
Normally I narrowly jump over the second enemy.

7:22
Only need one jump to collect the etank.

8:46
The missile refill went well, but I didn't react fast enough with shooting the red door.

11:25
Normally the missile makes contact with the enemy and I can clear the room faster.

11:58
Odd Ripper placement, caused by the mistake in previous room. The game's funny like that.

12:49
Ideally, the bomb propels you through the crevice instantly, rather than after a bounce. Still, pretty solid.

13:48
One of the hardest rooms to clear perfectly, due to rinkas.

mother brain:
This was about 3 seconds slower than my fastest ever console practice time. I was pretty pleased.

15:31
And there goes my last hope of perfectly equaling the up+A run.

First and foremost I'd like to thank everyone at SDA for all the time and hard work it takes to keep the site going. I'd also like to thank all the runners of this game before me for coming up with many of the strats I used in this run. Now to get down to it.

Beginning to Missile:
This section is done almost perfectly with only 1 missed jump on the way up the vertical blue corridor. I'm not 100% sure but it seems to me to be faster to damage boost to the right and freefall down the gold corridor as opposed to just walking off and dodging the enemy.

Missile to Bomb:
Once again an almost perfect segment, missing the jump after the e-tank by a frame or two.

Bomb to Ice:
Can't get much better as the missle drops are pretty ridiculous.

Reset to Kraid:
More sick missile drops on the way to Kraid's lair and in the room before Kraid get my heart pumping. I need at least 21 energy going into Kraid's room with my strat to get hit by the spike, making it possible to mid-air jump after shooting get the e-tank in there, so I have to get a couple extra energy after I am full of missiles.

Kraid:
Everything went as planned until I freeze the middle spike in a terrible place. Fortunately Kraid seems to like me this time and walks all the way to the right of the screen allowing me to jack him up nicely from the left side using the spike as a blocker.

Reset to Tourian:
I take some random damage because of unfreezing an enemy while trying to use him as a platform. On the way up the blue shaft I get startled by the last guy because he's not supposed to be there and I lose a second killing him with the ice beam instead of missiles. I also miss a couple jumps that I will attribute to nerves (knowing I have a really nice time going). Somehow I totally bungle freezing the Rio in the entrance to Tourian and have to wait for him to unfreeze for fear that i mess it up again and end up killing him before i can get across so I play it safe.

Tourian:
I've had better drops from the Metroids but these are definately acceptable. I screw up freezing the second set of Metroids and have to kill them one at a time which made me a little nervous because I've run out of missiles here lots but luckily one of them give me a missile drop so it was all good.

Zebetite Room:
Everything is fairly smooth until just before the last zebetie where a few Rinkas come at poor angles and I have to play it safe. The Mother Brain fight goes ok with a couple screwups freezing the Rinkas, but all in all it's not too bad. I miss a couple jumps during the escape but I don't fall at all so I'm happy with it considering the rest of the run.

Running Metroid usually comes down to missile drop luck with execution coming in a distant second, so I am very happy with it overall. This should be a very difficult run to beat. I hope everyone enjoys it!

Very little to be improved here. Metroid is my favorite video game and I've played it on and off basically since it was released. Thanks to my friend Jared Smith for encouraging me to achieve my original one-miniboss record at Twin Galaxies and therefore serving as an indirect inspiration for this record. Also, special thanks to the band Hella, who often provided an appropriately otherworldly soundtrack to my long and numerous practice sessions.

BRINSTAR 1
This was the main place I used "Spawn Manipulation." The first was in the second hallway (with the 2 Skrees). I killed both Skrees to make sure that the next 3 Skrees would spawn, which in turn causes the Geemer in the narrow passage to not appear.

The last main one was used for the gold shaft near the Bombs. I'm not exactly sure on the spawn here, but I know as long as the Geemer doesn't appear just outside the hallway leading to the Bombs, the Waver will appear with the 3 Rippers above.

The route through here is the same as Red Scarlet's, but instead of using Door Jumping to get up to Varia, I used a Double-Bomb-Jump Jump.

NORFAIR 1
My route here is also identical to Scarlet's, except that I use an Unmorph Jump to jump "through" the blocks leading up to the Screw Attack.

I also attempt to Double-Bomb-Jump Jump up to ledges in a few places, but only managed to pull it off correctly once.

RIDLEY'S HIDEOUT
Again, same path as Scarlet. Fortunately, for me, Ridley's Fireballs were flying far, which meant I could just stand next to him and fire away. I think I should have been collecting more Missile refills on the way here as well.

After running out of Missiles, I switch to "Rapid Firing" the Wave Beam. By "Rapid Fire" I mean that I hold the fire button down, and repeatedly tap left against the platform. This gives me one shot for every press and depress of the left button, doubling my normal firing rate.

NORFAIR 2
Coming out of Ridley's Hideout I screwed up Block Jumping up to the door in that first shaft. I hate trying to do that with the Wave Beam.

The only things left to collect are the Ice Beam, the 5 Missile cluster, and the 2 Missiles to the left of the entrance. I use some more Unmoprh Jumping to get through the blocks in the main shaft.

When I get to the top, I go the back way to the Ice Beam instead of Bomb Jumping in from the front. I didn't really notice that big of a speed difference.

BRINSTAR 2
Just grab the Energy Tank back near the beginning. Though I didn't shoot high enough the first time to open the hole the Tank is in the first time.

KRAID'S HIDEOUT
I used a completely different route from Scarlet. At the first juncture, I went left to the Missiles, and then to the long drop shaft.

From there I grabbed the Missiles to the right, and Bombed down in the Blue room and went right, past Fake Kraid (although, I've never seen him move that far left before...kind of disoriented me) and Bombed down through the Green room.

Kraid himself cooperated. I just freeze the middle piece of lint, press myself up against him, and fire away. I grabbed the Energy Tank in here afterwards.

I'm calling this next area the Block Shaft. You know which one I mean...the shaft with the tall pillar of breakable blocks. Yeah, I hate this shaft. I took it a little slow to make sure I didn't fall. I also want to know what the hell hit me when I was a few screens up from the door.

I grabbed the Missiles off to the side of the Block Shaft next, then went back to the main shaft and used a Midair Unmorph Jump to get across without having to freeze Rippers. Then I grabbed the Energy and Missile tank behind the Red Doors

BRINSTAR 3
I just grab the Long Beam then head to Tourian...though my ascent of the two Blue shafts was a little off...

TOURIAN
This went quite well all the way up to Mother Brain herself. The only mishaps that occurred were the fall into the Magma in front of Mother Brain, and the couple missed jumps during the Escape.