Released in the US in March 2006, Metroid Prime Hunters is at once a mediocre online multiplayer FPS and a mediocre offline single player FPS. The touch-screen look and d-pad movement controls work well, but the sum total of two unique bosses (excluding the final) does not. MPH was first introduced as a demo included with the original Nintendo DS. Samus is sent to collect 8 octoliths in order to discover and protect the "ultimate power." Six new hunters are introduced in the game, all of whom desire the ultimate power for their own duties or missions. Samus must avoid and conquer these hunters and protect the power from being placed in the wrong hands. 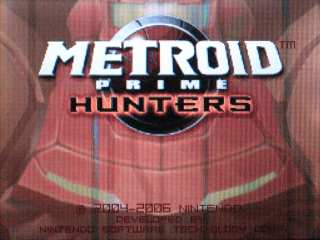 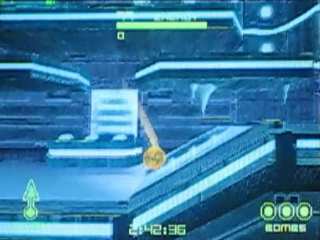 It's been quite a while since my last Any% run at this game. When I finished the last run, I didn't half-expect to get in range of breaking anything lower than 1:18 in any future attempts, and considered the run to be very close to whatever an optimal time would be considered. Boy, was I wrong. My original goal for this run was to break 1:19:30, because I thought it would be extremely difficult to find more than a minute of improvement. As a result, I ended up beating my old time by just over four minutes, which is quite a lot of progression.

So, while I do find 1:16:33 to be an extremely satisfying achievement that met my goal, I really do think that there could be a lot more room for improvement that I don't yet realize. I used to think that getting under 1:22 would be near impossible, so I really don't think I (or anyone) could make a real guess as to what an optimal time for this run would be. Don't get me wrong, this run is quite amazing and many of the segments were either flawless or could be improved by a few seconds, but there are many factors in the game in addition to just being fast that relate to the speed of the game (the most important factor obviously being the random appearances of hunters and guardians during escapes). If I had to guess what a perfect run would look like, I'd estimate something around 1:14. That would assume having the same speed of this run combined with segments in which no hunters or guardians appear during the escape portions, and all of the sequence breaks are executed without hesitation. It'd be very difficult to achieve this time, but I do honestly think it's in range of possibility.

Next up is individual segment commentary. I'm going to try and point out anything really good in each segment, and hopefully spot out any mistakes in the segment.

In conclusion, this run is very fast and contains mostly minimal flaws. The biggest time consumers in the run are having to face hunters and guardians in segments 4 and 11 and being able to eliminate guardians faster in general. Based on the few mistakes in this run, I believe 1:15 is easily possible, and that 1:14 would be considered an optimal time for this game.

MPH is a great game, but I have to agree with the majority of Metroid fans that its single player was very lacking. The game was mainly built for its Wi-Fi functionalities, which were eventually destroyed by hackers, glitchers, etc. I used to play the game merely for the online experience, but one day I just decided to re-beat the adventure, and started making a goal to break two hours. It's funny how I'm now able to break 1:20, a time I used to think would be impossible.

Will I try to beat this run some day? Probably, though not for at least another year. My goal for that future run will be Sub-1:16, which I already know is possible with a little luck.

I began thinking about doing a 100% run early last year when I realized that I'd almost completely abandoned the original Sub-1:20 run I started shortly after completing the first run. I figured that if nobody else has interest for the game, I may as well do every category and have as many runs up as I can. I knew the consequences of doing a 100% run, as I originally thought that the category would include scanning everything for 100% Logbook. When I learned that I wouldn't have to scan the hundreds of items and still get a qualifying 100% run, I immediately began to look at it differently. Over time, this run became progressively easier and easier than the any% run, aside from having to take some detours here and there for certain expansions. Soon after my query about the game's definition for 100%, a compilation thread of 100% and Low% definitions for games appeared on the forums. =D

My very first test run of 100% went incredibly well, and I ended up with 1:26, thus I decided to make the actual run Sub-1:26. I really had no idea that I'd end up beating that initial run by around 4 minutes. I think it's kind of coincidental that both the Any% and 100% runs were improved by ~4 minutes. Overall, this run is very good, though in some parts it may become very easy to tell that I had little experience in attaining some of the expansions, as in one or two segments I tend to lose my sense of direction for split seconds. While these do look very dumb for a speed run, they actually don't lose very much time (1-3 seconds max) so it doesn't really affect speed more than it does appearance.

Subsequently, this run is very fast, though contains several faults that allow room for betterment. The two segments that could be the most improved are segments 4 and 11, similarly to the any% run, and I think that in an absolutely perfect run of 100%, that Sub-1:21 would be possible. This assumes the least amount of hunter and guardian appearances and executing all sequence breaks and tricks quickly while having the entire route in mind during a segment. Because this is my first (official) 100% run, however, I can't really tell what times are possible given the run I've just completed. For all I know, 1:19 may be possible for 100%. I honestly don't know, but Sub-1:21 is definitely in range.

In all probity, I don't think I will be redoing this 100% run in the future. While I now find it to be easier than the any% run, it just doesn't seem to be as much of a challenge to me despite the mistakes I've made here. Unless I have a sudden urge to give it another go, this run will most likely stay here for quite a while. But, who knows, someone else could take interest in doing MPH speed runs between now and whenever I eventually (may) redo this run.

Now that I've brought it up, if you have the proper equipment to do a DS run, go right ahead and do it, since nobody's stopping you. MPH is currently the only DS game to be up on SDA, and it feels very awkward having the only run for that system. I think it'd be great to broaden the DS speed run community beyond just MPH and Super Mario 64 DS. If you don't have the equipment to do the run, but want to see one done of a game you favor, then just contact me using the info below and let me know about it. It's likely I have the game and would be willing to do a speed run for it. =)