Released in 1986, Mighty Bomb Jack is the sequel to the less sturdy Bomb Jack and was ported to various consoles including recent Virtual Console releases and features a Villain named Belzebut, because the royalties for the real deal apparently were too high. 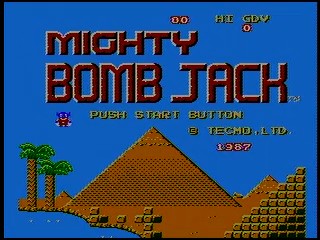 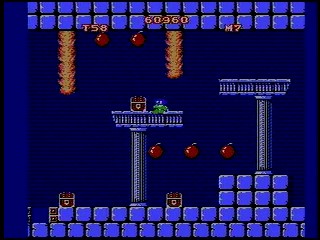 Background
I decided to speedrun this game after having watched Arino from Gamecenter CX playing it. If you're reading these words, chances are that you know what Gamecenter CX is. If you don't, chances are that you will like it. Especially the two Mighty Bomb Jack episodes (one in the recording studio and one in front of a live audience) are well worth watching in my opinion (just be sure to find the ones with subs!). It gives a fairly accurate representation of the complete bullshit this game is. I'd like to develop that last thought a bit more before moving on. I think the gameplay is actually very good. The controls are awesome and Jack has a whole arsenal of different moves (in comparison to many other games from that era) to help him navigate through the levels. It seems that such a good foundation to build on would be a guarantee for a good game. Unfortunately, the developers completely messed it up from there on. The levels are very uninspiring and they all look pretty much the same. There are no fun puzzles to solve and always the same enemies. There are secrets to unlock a better ending (simliar to Solomon's Key), but getting them without a walkthrough and/or a vast amount of save state practice would require crazy dedication. The fact that there are no continues or passwords and that extra lives are pretty hard to come by does not work in favor of this game either. I will however give the game credit for presenting a speedrunner with a few interesting and original challenges.

There is more than meets the eye in Mighty Bomb Jack. In order to document these aspects of the game, I have a created strategy wiki with focus on speedrunning. I will therefore not repeat myself in these comments. The interested reader is asked to go here:
https://kb.speeddemosarchive.com/Mighty_bomb_jack_(nes)

Final thoughts
When I started playing this game, my goal was to get close to the fastest reported time I could find, rta-time of 7:25 (no video and I also suspect it was played on emulator and with the help of autofire). That time was for the Japanese version, which has a few seconds of disadvantage compared with the US version. It didn't take long to realize that I had routes that would actually give a comparable time. More attempts, more testing and a better and better understanding of the game allowed me to continue to chop off second after second until sub-7 was finally within reach. The last piece that fell into place was how to get through room 13 (before that, it was basically a brick wall). With the route in place, I set my goal to 6:56-6:57. This run was a 6:57, but could have been a high 6:56 with cleaner execution.
By comparing the level completion times in this run with some of my other attempts, it's clear that even a solved room with no particular mistakes can be 10-15 frames off the best attempts. By dedicating more time to this game, I'm sure it would be possible to eventually lower the average completion times that would add up to another second or two over the course of the run. Before heading into some of the room solutions seen in the tases, there are also a couple of mine that I admit are a bit conservative. Having another pair of eyes coming up with ideas could of course also bring up some improvement. So there is still potential left in this category. However, I think this is how far I'm prepared to go for now with this category. I plan to look into the best ending as my next step.

Background
I started working on a best ending run once I had recorded my normal ending run. At first I wanted to do a no death, no warp run to differentiate it from the normal ending run and show off as much as possible of the game. However, I soon realized that all the levels are just like others. There is not much in terms of "level themes" (fire, ice etc) to make the game interesting to look at. The enemies are the same from level 1 until the last level. There are no new obstacles, no cool items to collect etc. The difficulty stays the same throughout the game. It looks like the developers have just more or less randomly scattered chests and obstacles and then rolled a die to decide which room should go where... I'm exaggerating a bit, but the design is just really uninspired imo. I then decided to just go for the fastest solution (with deaths and warps), even though a good portion of the run is then pretty much identical to the normal ending run.

Final thoughts
Once I had the route pinned down and started to get a few finished runs, I set a goal time of 12m05s, with the hope of maybe even getting a 12m04s with some luck (I knew it could be even faster than that, but I didn't have the ambition to continue pushing down the time forever). I'm therefore a bit ambiguous about the 12m06s. I feel there is maybe one or two mistakes too many, but at the same time I don't feel like grinding out this game for one or two seconds. I hope it was still an enjoyable watch!