Mighty Final Fight is the 1993 NES port of the arcade classic Final Fight, chronicling Mayor Haggar's desperate journey to relive the spinning high he felt at a state fair in his childhood once. And something about his daughter, I suppose. 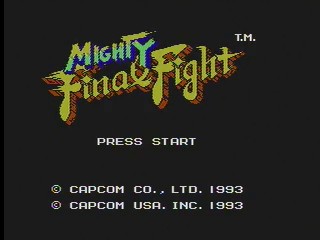 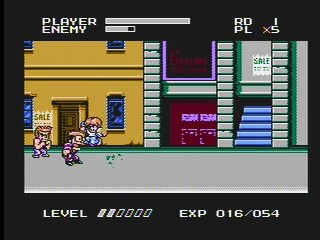 So this is a game I stumbled upon while going through NES games on emulator a while back. At the time, the game didn't grab me that hard, but I recalled enjoying it when I stumbled across the TAS, and so these runs happened.

Cody is the character I finished first by a significant margin. His standing string is the most useful of the characters, and his fireball special he gains at level 4 can be a useful way to finish off enemies at a distance. The biggest advantage of Cody's standing string being so good is that it makes it easy to manage enemies' health so that I can kill them with the 3rd knee bash from Cody's throw. The EXP you gain per kill is based on what attack you finish an enemy off with, and the 3rd knee bash gives 6 EXP, as does the fireball he gains at level 4. The rest of his attacks build 4 or less EXP and so are sub-optimal for grinding. It's important to grind EXP quickly because you do more damage with levels, with a HUGE damage spike when you reach level 6.

Otherwise, the run is basically just rolling against the game's pretty extreme RNG. What food drops out of barrels (if any) is random, and eating food at full health gives EXP instead of health. What enemies spawn, which side of the screen they spawn on, and how much health they spawn with is all random, so some mistakes are tolerated just because the spawns worked out to be faster regardless.

I finished Guy a couple months after Cody, partially due to it being more difficult to play efficiently with him since his standing string is terrible. Jumping straight up and using the knee attack over and over, with a few strikes to manage health when completely necessary, and then killing enemies with the 3rd hit of Guy's knee bash throw is necessary for grinding EXP. Guy's level 4 special attack is a double kick which is not terribly useful, but he does have a unique flying kick move done by jumping backwards and attacking at the correct time. Guy requires the least EXP to reach level 6, which is the entirety of the reason he ended up with a faster time than Cody. The damage each character does essentially doubles at level 6, and means I no longer need to manage enemies health for throw finishes.

Guy is also the only character with a particularly useful weapon, the throwing stars do decent damage and can be used to attack enemies long before I'd be able to get to them anyways, meaning the time loss other characters suffer from their weapons knocking enemies down doesn't really come into play for him.

Like the other runs, a big part of the game is just rolling against the game's pretty extreme RNG, with random food drops for EXP, and random spawns coming from random sides of the screen with random health, so some mistakes just have to be tolerated in order to finish the game.

Haggar was the last character I finished, and took quite a bit longer than the other two. For Haggar, it is critical to reach level 4 as soon as possible. His special attack, the thunder tackle, gives in a reliable, damaging infinite. Fortunately, Haggar starts the game at level 3 instead of 1, and while Haggar requires the most total EXP to reach level 6, his piledriver builds 8 EXP per finish as opposed to Cody and Guy's maximum of 6 EXP per finish.

Unlike the other two characters, Haggar requires pretty precise positioning in order to attack the bosses without simply getting hit or waiting for a laggy attack. This fact, added to the fact that several sections have to be completed at full health in order to ensure Haggar gains enough EXP from food drops to reach critical level-ups, meant that finishing this was significantly more difficult for the mayor.