Released in September of 1990, Mission Impossible teaches valuable lessons such as only kill in self-defense or a helicopter will arrest you, look both ways when crossing the street or else a car will hit you, and the best way to disable computers is to outwit them by playing a game no one has ever heard. Your mission, if you choose to accept it, is to rescue Dr. O and his secretary from the Sinister 7 hideout, then prevent World War III from happening. 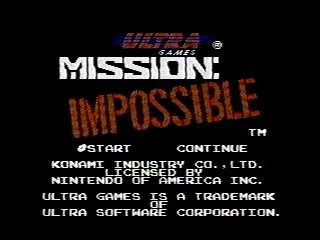 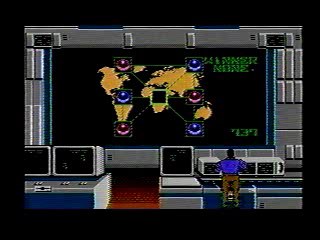 Here's a game whose challenge lives up to its name. This is another one of those games where I don't think the programmers meant for you to make it all the way through without a continue. Each level's challenge is stacked up rather high. I personally hate the racing scenes where crashing even once ends the game. The other stages have their own nasty tricks, but they're much more manageable, since there are plenty of power-ups available. You just have to know what to do and when, such as pulling switches to disable certain traps. Not all of the switches are necessary though.

To top it all off, there's a luck factor involved in a decent speed run. There are 3 places in the game where you need to collect a door keycard from one of two people. If you pick the wrong one, you get attacked (like I did in Area 4), but it's random. Of course, there's always someone out there who tells you which guy is the good one, but asking him wastes time. So, you're left with taking the guy on the shortest path and hoping for the best. I was 2 for 3 in the luck department, which is passable. You only have a 1-in-8 chance of getting all 3 of the good guys to appear in the shortest path.

Area 6 is just plain annoying. You reach the end of the level only to get sent down a trapdoor and have to go through the toughest part of the stage again. As far as I know, there's no way to avoid this, but if anyone gets past it on the first try, I'd love to hear about it!

Enjoy the ending, along with the WarGames movie rip-off. :)