Released in 1991, Monopoly for the NES offers a new, all-digital approach to family drama. 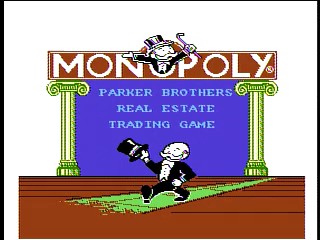 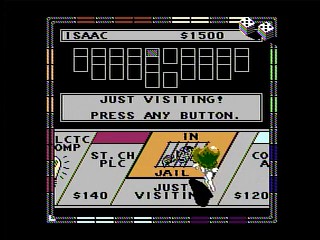 So, this is NES Monopoly. It's a fantastic port, with a bunch of A.I. variety, customization, animations for everything, fantastic audio design, and fast paced gameplay. Too bad it's based on Monopoly.

The main goal is for me to acquire enough property so that I can mortgage all of it, then trade it all to Isaac for all of his property and money. Luckily, the computer REALLY likes monopolies, and will pay insane amounts of money for them. Unluckily, getting a monopoly in 30 seconds is not exactly likely to happen. But we're in luck! The computer also likes railroads!

The computer will give about $1400 worth of property and money for 3 mortgaged railroads, but it's not that easy. For one thing, the computer will NEVER give more than $1220 in cash while trading. Never ever. So, even if I get a godly start and get park place + boardwalk in 20 seconds, the computer has to spend $280 before accepting the trade.

In addition, $1400 worth of property is not enough, so I have to also land on something extra (Ventnor).

So, factoring in all of that, the luck in this run was COMPLETELY INSANE. The computer hits 2 expensive properties, my 3 rolls are railroad, railroad, ventnor, railroad. I fully expected a sub-1 to take months of attempts. Even the menuing was spot-on. I am very happy with this run.

- I choose the iron as my piece. I know it would be easier to choose the hat, but what can you do? Also, the iron is faster.

- Each opponent has their own A.I. quirks then can get in the way (thanks Darkwing for clueing me in). For example, Ollie is so dumb that he'll start an auction whenever he lands on an orange property, which kills the run. I choose Isaac, who will initiate a trade if we both have one red property, which is not so bad.