Monster Party is a thoroughly awesome game about monsters that is a real party. It features some of the strangest dialogue and most creative enemy encounters of any game, including walking pants, fried shrimp, an onion ring, shish kebab, and a cat that throws kittens. On his way home from a baseball game, a boy named Mark is captured by a winged alien named Bert. Together, they head to the Dark World to beat baddies with a baseball bat. Monster Party was developed by Human, a Japanese company, but was never released in Japan, proving that it is possible to produce a game that is too weird or bloody for Japan. 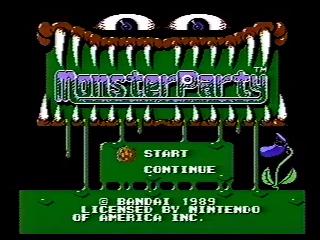 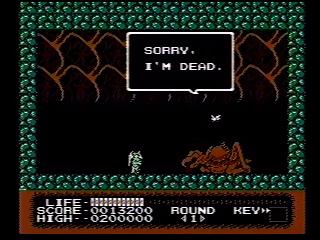 Parts of this run may look strange as I run myself into many enemies and take time to kill enemies that don't appear to be in my way - I do have reasons. So here goes.

0:09
-You skipped the intro story, what's this game about?
-A baseball-playing kid named Mark joins with a dragon monster named Bert in order to save Bert's home planet by defeating the monsters that have overrun it.

0:24
-What do those "?"s do after you defeat a boss?
-They give either extra points, 4 bars of extra health, or they turn you into the Bert the dragon. Most of the time it's points, but at least one of them in the first 2 levels has to be the +4 health or else I reset - I need a lot of health because I am constantly running into enemies because it takes less time to walk through them than kill them.

0:35
-What's going on?
-The kicking legs dropped an item that looks like a pill and it turns me into Bert.

0:41
-Is the whole speedrun going to be you flying over the level?
-No, just levels 1 and 8, and part of level 5. I also fly up through most of level 7. But the other levels are more interesting.

0:55
-What's going on?
-The boss is already dead by the time I get to it. I just have to walk to the exit and wait for the "defeated" sound effect that opens the door.

1:20
-Why did you kill that dog?
-To get another Bert pill. The blinking that was just going on means that I was about to turn back into Mark.

1:33
-Wouldn't you have saved a second if you just left the room instead of getting the "?"?
-Yes, but I'm still trying to get that +4 health since the first boss didn't give it.

2:09
-Why did you stop walking?
-The enemy drops a +2 health item (heart.) I don't really enjoy stopping my forward motion, but I build up all this health because I intentionally get hit a whole lot in this and the next 2 levels.

2:38
-You just changed locations abruptly, what happened?
-I pressed "Up" on that wall pipe and it warped me. This is the only level with warps like that.

2:53
-Are you fighting a fried shrimp?
-Yes, as well as an onion ring and some sort of kabob. This is actually the toughest boss fight in the game to do right - too close to the enemy, and you get hit and knocked away. Too far from the enemy, you can't reach him with your bat and you have to chase him all the way across the screen, wait for him to turn around, and try again. Lots of resets happened here, mostly from the onion ring, whose proper proximity is hard to judge.

3:40
-Why are you fighting a well that throws plates?
-It's a reference to a story from Japanese folklore. Strangely, this game was never released in Japan.

4:57
-Why aren't you nailing him with shots?
-Starting in this level, Bert's shots go a lot farther, but he can still only shoot 2 at a time, which means slower shots. During the time interval in which I can't shoot, I walk to the left so I can quickly exit the room as soon as he's defeated.

5:07
-Can't you fly over those guys?
-Yes, but I need the Bert pill from the flying ghost.

5:11
-Why are you shooting at nothing?
-Flying against the ceiling and mashing the Fire button makes all the stalactites between here and the next boss room fall before I reach them. I don't know exactly why but it works nicely.

5:33
-Why did you get that "?" mark when you've got a good amount of health already?
-Many resets happened due to the luck factor of this part of the speedrun. At this "?" or from "?"s from the next 2 enemies I kill, one of them must be a Bert pill - this is random and not very well weighted in the odds. Even with 3 of them in a row, this spot led to reset after reset on otherwise good runs - keeping Bert sustained and not reverting to Mark is an absolute must, the difference is about 10-15 seconds. If the run was perfect otherwise, I would not be happy with the time because I'd always know it would have been faster if I had kept Bert sustained. Thankfully, I did manage to get a Bert pill from the "?" dropped by the flying ghost. By the way, dodging those 2 umbrella bats is pretty tricky.

5:57
-Why did you stop to turn around and kill those umbrella bats?
-If I didn't, the flying ghost wouldn't appear below. I need that flying ghost for a Bert pill.

6:50
-It's easy to fly over that moving rock as Bert, but it's hard to jump over it as Mark. Usually I'll either have enough time to fly over it, or will revert to Mark a little earlier, which would give me better timing preparation. This time, I turned into Mark when I was right up to it, which made the timing really difficult. With all the flashy transformation going on, I couldn't see exactly where I'd be once I finished becoming Mark, but still managed to get that jump right. Hooray! And the next jump, through the rocks thrown by the scorpion, is a pretty tough jump, too.

7:56
-This is a tough spot to time right that could have been a lot worse. When I miss, I usually get stuck there for 5, maybe 10 seconds, but here I manage to escape with only minor injuries.

8:30
-What music is that?
-He's playing a song from Altered Beast. In Level 2 of that game, your human character turns into a flying, flashing, projectile-shooting dragon. Hey, also, you may notice I'm pretty beat up by the end of this boss fight - this is always the health low point of the whole game, and the reason for collecting so much health in the first 3 levels. After this level, I never again take time to stop and grab more health. The game gets significantly easier.

9:40
-Why don't you kill these bosses?
-They can't die, they just keep coming back. The only way to defeat them is leave them alone long enough, then they collapse on their own. So I improvise a dance while we wait.

10:26
-Why don't you hit him from the front?
-His vulnerable spot is his back, and standing in front of it means you get nailed by all the javelins. When you're behind him, you can still hit the javelins back - though that doesn't happen in this particular run.

11:05
-Oops. I take 4 hits when I should be able to get through this part with 0 hits. The good luck in other places makes up for the few seconds lost here.

11:55
-Wouldn't it have been faster to go straight to the boss without getting Bert?
-To get there, yes. But Bert can beat this level's boss so fast it's worth the time it takes to become and change back from Bert.

12:15
-How did you know where the real boss would be?
-He always starts in the same place. Ideally he just hangs around the bottom corner for the whole fight, but if he chooses to run up to the ceiling and you're Mark, you have to wait for him to come back down to attack him some more. As Bert, you're free to fly up and chase him yourself.

12:26
-Most of those windy water drop things can't be avoided without standing around too long for it to be worth avoiding.

13:06
-One thing to note about Round 7 is that there's a third boss that I don't fight. You're free to choose which, but you must defeat 2 (and only 2) of the 3 bosses, or else you'll lose the exit key and not be able to leave the level. The third boss is another spider like the one in Level 3. Since he takes the longest to kill, I avoid him. Also note that once I turn into Bert, I don't change back to Mark for the rest of the game.

14:39
-Why are you going the wrong direction?
-I have to grab a Bert pill from that dynamite.

14:49
-Why are you ducking down?
-It shortens Bert's projectiles. That way you can shoot more of them faster. You'll see that during the next boss fight, too.

14:57
-So if you stay at the top of the screen, the dynamite can't hit you?
-No, just half of them can't. For the other half, you have to be ascending to the top for them to miss you. So sometimes you'll see me lose altitude, then fly up - that's because those dynamites would have hit me had I stayed at the top. And I grab a total of four Bert pills from the dynamites during this level.

16:27
-Final boss?
-Has to open his nose in order to be damaged. It takes seven shots from Bert to kill him, which you must do during only the first 2 times he opens his nose (or else it takes too long.) For one of the nose-openings you must hit him 4 times before the nose closes again - and there's a very small window of success for that. I failed a couple runs for this reason, but it worked out this time.