The Genesis version of Moonwalker from 1990 is probably the best remembered. In it, Michael Jackson, God bless his soul, performs his typical dance routine all over 18 stages to mow down bad guys and save the good ones. The children that is, who are hiding in car boots and trash containers and are all called Katie. The best move is the one that causes all the enemies to start dancing with the King of Pop before collapsing from aggravating their heart conditions. 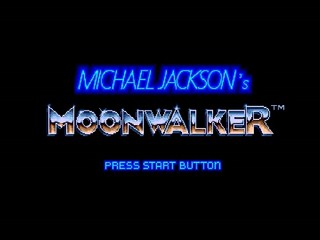 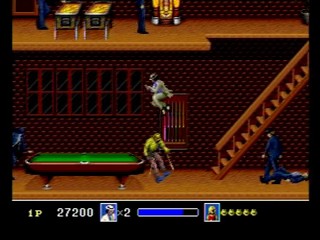 Hey there, SDA community. I am a beginner at speedrunning, and this is my first run I ever submitted to this site (one of the only games I had that didn't already have a time :P ). I hope you like it!

I used GameFAQs for researching the layout of each level and location of each kid (useful for those darn Caverns levels), and both published TASVideos runs for general route and strategy planning (as well as a few various sources on twitch and YouTube which I forget at the moment). Without further ado, let's get to the Stage-by-Stage comments!

Title Screen: I set the control scheme to Type 4, as that's the most comfortable for me.

1-1: Overall, a pretty good run. I'm happy with it.
Miniboss: My strategy here is to normal-attack the blue-suits, rather than dance-attack my way out (I measured, this strategy I use here is the faster of the two).

1-2: This level was very quick. I don't see any glaring improvements to be made.
Miniboss: My strategy here is to throw my hat so that it hits all the gray-suits as they come in, and then attack them to finish them off.

1-3: I'm not sure whether or not, when you go down the first staircase, it's fastest to collect the kid in the door to the left, so I don't in this run.
Miniboss: My strategy here is to mostly hit him offscreen by using a whole lot of jump attacks. I thought I did well, though I could have done better by completely killing him offscreen.

2-1: A pretty straightforward route; I'm OK with how I did.
Miniboss: My strategy here is to dance-attack everybody on the screen. Watching them dance is fun!

2-2: What is it with criminals and putting bombs and kids in cars? I avoid opening cars with bombs and get the kids in a pretty linear format.
Miniboss: I can't dance-attack these commandos or else they run off, so my strategy here is to just normal-attack them all, and throw my hat to finish the last ones off.

2-3: On the top floor of the parking structure, I spun for a bit too long and threw my hat, so I lost a few seconds there. Overall, though, a pretty average run.
Miniboss: In this miniboss fight, you have to kill the white dog by attacking him 4 times. Whether he enters from the left or right is random, so I go as close to the top-middle as possible and hope for the best. I seem to have done a pretty good job, though.

3-1: Not much to say here, the route is self-explanatory.
Miniboss: My strategy here is to dance-attack all the zombies.

3-2: The first kid I collect just happens to trigger a shooting star that, if Michael collects it, he turns into Mecha-Jackson and goes in a state comparable to temporary invincibility. However, in this state, Michael can't collect kids (and besides, the transformation to and from this state is loooooooooooooong), so I intentionally avoid it by stalling. On a side note, the branches you swing from are very touchy, and it's hard to get into position to use them.
Miniboss: My strategy here is to mostly crouch right near the tombstone and crouch-attack on both sides. Same for the zombies that throw their upper bodies at you, but with the added precaution of not letting them hit you. Overall, a pretty well done 3-2.

3-3: Yes! The swing from the branch at the end worked!
Miniboss: My strategy here is to jump-attack the first zombie, and then just stay in one place and crouch-attack for the rest of the battle.

4-1: I worked for days trying to memorize the optimal routes for these levels. Also, most of the time I try to moonwalk past cobwebs and spider doors, as it maintains my speed through the cobwebs and opens the spider doors.
Miniboss: My strategy here is similar to that of 2-2, except I try to work in the stalactites as well.

4-2: That gosh dang spider near the end slowed my platforming a bit. I could definitely improve upon this level.
Miniboss: I have no set strategy for this level; I just went all over the place.

4-3: Memorization on this level was THE WORST. Did alright, though.
Miniboss: Once again, I kinda go all over the place a bit.

5-1: I'm satisfied with this level. Especially at the jump at the end; a lot of the time, I end up undershotting the platform and lost a lot of time. But I didn't. Woohoo.
Miniboss: My strategy here is similar to 2-2 and 4-1.

5-2: At the end, I try to take down the turrets on the bottom floor so they don't haunt me during the miniboss fight.
Miniboss: The conveyor belt and jumpy enemies makes movement kinda unpredictable, so I'm all over the place here. I could have done better here, especially walking to the girl at the end.

5-3: A little ways into the level, I fall down to the bottom and lose a lot of time. I'm not satisfied with my performance here.
Miniboss: I use a glitch where you don't have to turn into Mecha-Jackson during this fight (the transformations take a whole lot of time). Usually, if you press any button during the fight, you are forced to collect a shooting star and undergo the transformation, but if you jump right before the pause before the battle, and then dance-attack with 8 or more enemies on the screen, the battle is automatically skipped. B-)

Michael's Battle Plane: My strategy here is to just hold the attack button, and center in on Mr. Big's ship the entire time (and avoid the kamikaze ships if I'm off-center).

Well, that's it. I hope you find this run enjoyable. I think it could be improved, but I'm pretty satisfied with my time. (I even beat the 28-minute run from AGDQ, wow.) Thanks for watching!