Released in 1992 for the Super Nintendo, Musya: The Classic Japanese Tale of Horror is a 2D side-scrolling platform game where you take control of a pikeman named Imoto, who must descend into the abyss to save a maiden named Shizuka. 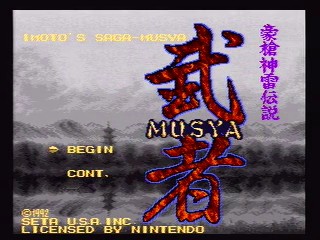 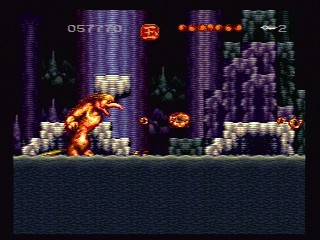 So this is Musya, a game sent to me by Omnigamer for the bad game exchange. Things to note about this run:

At the end of each stage, you get a life refill, which wastes a little over 1/10th of a second per damage you have to heal. Therefore, taking as little damage as possible is generally ideal.

The way the spear damage upgrades work is quite odd. You start at spear level 0, and each pickup increases it by 1. Upgrading the spear level gives it bigger and farther-reaching projectiles, but your damage stays at 1 from levels 0-3, goes to 2 for levels 4 and 5, and 3 for level 6. More on this in the level 3 notes. The projectiles do not follow this damage formula, and instead do 1 damage until level 5, where they change to 2 damage.

Lag in this game costs time directly, and also can just completely lock out your controls. There are a few places in particular in this game that I have to use caution or even go out of my way to kill things to ensure I don't miss an easy jump because the game was lagging and decided I didn't press jump any of the 5 times I mash it.

Tengumura Cavern: Almost nothing interesting here. Bear's flame attack has really bad hitboxes which I abuse to kill fast but its choice in attacks is random so I did well here.

Catacombs: Going around the loop here to collect the spear upgrade is important for damage later, otherwise its just important to get to the boss with as much health as possible since it's the only boss I use spells on. The end of the first screen looks weird because the game ALWAYS lags BADLY here, and the game therefore loves ignoring your inputs like crazy.

Palace of Hate: This is where the run starts to get interesting. I max out my spear to level 6, then get to the boss with as little health as possible and purposefully die. When you die in this game, your spear level drops by 1, so I am now at spear level 5, however for some reason the damage is altered incorrectly to make me do 6 damage per attack instead of the normal maximum of 3. I'm guessing this is the result of the programmers changing the damage values on the spear at some point later in development, but forgetting to correctly modify it for spear level reductions. Regardless of why this happens, it works out to save a ton of time over the course of the rest of the game, which should be apparent by the fact that mudman dies way faster than the first two bosses in spite of having more HP than either.

Then we get a nice unskippable cutscene where a woman tells us something about a talisman and gives us the power of the ancients (better known as electro-plating my spear and armor with gold and no in-game effect).

Cave of Darkness: Oh cool! Its Tengumura Cavern with some slight enemy position changes! I cast heros soul here to kill off extra enemies and therefore prevent lag. I tank the first cycle of the boss to ensure that I can two-cycle him.

Catacombs of Akuma: Again, its Catacombs but with enemy position changes, and this time I don't do the loop for the upgrade. I again use hero's soul to prevent some lag, which otherwise happens a ton here and makes a really bad mess of your controls. The boss is the first real mistake of the run, as I just barely miss a cycle on his first form, then proceed to position him wrong for the second form to compound my time loss. Even so, the first part of the stage usually has a lot more lag than it did this time, even with hero's soul to reduce it, and so I only lost about 2 and a half seconds on it.

Cursed Palace: It's palace of hate with extra guys divebombing me! The first portion of this stage usually lags REALLY badly throughout almost all of it, and hero's soul generally makes things worse here before better due to its odd tracking. The result of which was I saved a ton of so I actually saved quite a bit of time thanks to it deciding not to do that. The third screen has the boss exit moved, and as a result I have to make a pretty innocent looking 2 frame jump to get to it. Bonus, boss wasn't even changed this time so it's just mudman again without so much as a change to his pattern.

Stage 7: This stage has some pretty weird stuff happen if you start killing things, but just walking past everyone results in almost nothing spawning for some reason. I make a minor mistake not killing the one enemy I need to in order to spawn the boss, cost me about a half second somehow. I could attack this boss without taking damage, but his sword is so long I can only hit him with the projectiles without taking damage, and I'd have to retreat a bunch. So instead I just tank him since I'm doing way more damage than the programmers intended.

Watery Prison: First screen I only get one scroll, pure luck where they spawn, but I didn't get trolled by getting a random spear upgrade which would actually correct the damage I am doing to only 3. Second screen looks like it's lagging but its just how the water in this game works. Normally, the stage will actually lag as well, resulting in you going unbelievably slow and wasting a ton of time for no good reason. Hero's soul helps reduce the lag, but this run was basically a miracle in no actual lag happening.

Spikes and skull section is normally supposed to be a lot tougher than it looks here, but since my spear is doing 6 damage it kills all the enemies in one shot instead of 2. That said, I still get a bit unlucky and take a lot of damage from the flying skulls.

Lava section is one of the worst sections in the entire game to run. If you fall, you either die or lose time and spawn more enemies, usually resulting in death. The demons here have 8 HP each, so I summon Hero's Soul to help kill them before I actually reach them. That said, I only have 1 cast of heal here, and end up getting to the boss with a massive 2 health.

The final boss is....well easy. The second forms drops are extremely random though so I was at pretty bad risk of losing the run, but he decided to be extra nice and not hit me at all.