Mutation Nation is a side-scrolling beat ‘em up released by SNK in 1991 or 1992 depending on the Japanese or US/European cabinets. Two young fighters return to their slum only to learn a forgotten mad scientist’s experiments have resulted in the mutation and mechanization of the locals. Obviously, they determine the correct solution is to find said scientist and punch him in any and all faces he may have grown in the interim. The game is noted for having almost no defensive techniques for a player to shake off an enemy or escape a crowd. 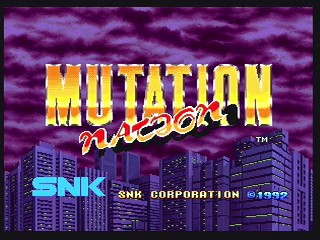 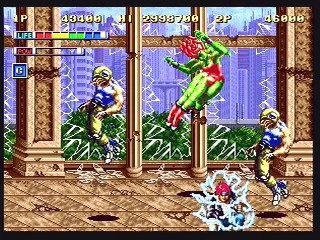 Released in 1991 by SNK for the Neo-Geo arcade system, Mutation Nation tells the story of Ricky Jones and Johnny Hart fighting their way through mutants to stop a mad scientist from uh... creating mutants?

The run mainly features two things features regularly and a few details on specific points. For the most part, the quick version of the basic chain is used, but instead of finishing the entire combo, I end it and start it repeatedly simply by adding a few frames of delay between punches. The result is the continuous rapid punching you see throughout the game. The second is planned use of the super attacks the game occasionally gives me. Using the super requires standing completely vulnerable in place for a second or so and getting hit resets the charge, so planning out when to charge up the attack before engaging enemies is critical. Each of the attacks hits the entire screen, but they vary slightly in power and utility. In order:

I'd also like to point out the game lacks any sort of desperation/safety attack to get enemies off of you. It's very important to maintain positioning with enemies to prevent yourself from becoming swarmed and dying. Also, your health bar has 64 points of health, and the only way to recover health is by picking up the power up orbs, which recover 8 health each. This includes going between stages, which means there is a limited amount of damage that can be taken over the course of the entire game, and that recovering health after a bad situation can take multiple stages.

The bosses in this game are a huge pain since they can completely ignore hitstun to attack you. For some bosses this doesn't matter since they do not attack fast enough to hit you before getting hit again, but for other bosses this is a big problem. The 2nd and 4th stage bosses are the most notable problems for this; they both have counters with huge range that are instant (as the 2nd boss shows in this run). As such, I save up as many specials to use on these bosses as possible. There are some AI abuse things you can do to the 4th boss especially (he canft actually turn around to counterattack if you are behind him), but the risk is still generally pretty high when attacking normally.

The final boss in particular is a huge pain. When he hits you, he tends to stand directly on top of you and just punch you again as you stand. Seeing as it only takes him 4 hits to kill you from full health, and he can repeat that pattern as much as he wants, he can pretty much end any attempt where I go for fast attack patterns.
There are some more detailed explanations of specific strategies in the audio commentary.  Thanks to everyone for watching, and thanks to all the people at SDA who keep the site going after all this time.