Released in March 1998, in this Mystical Ninja game Goemon and his friend Ebisumaru must save the land of Japan from an alien invasion while finding strange friends and foes alike! This was the first of three Goemon games for the Nintendo 64, although the last one was a board game, so nobody really cares about that one. 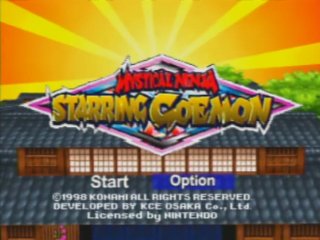 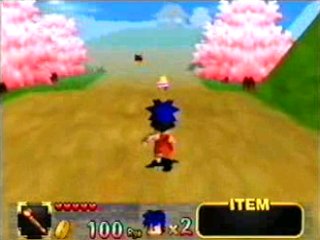 Mystical Ninja Starring Goemon was always one of my favorite games when I was younger, despite its glitchiness, corny jokes, and questionable storyline. It's always refreshing to play a game where the main villain isn't trying to destroy the world and kill everyone. All the Peach Mountain Shoguns are trying to do is to turn Japan into a stage so they can perform for everyone all the time... is that really so evil? Either way Goemon and crew have to stop them, since their singing is a little questionable, they kidnapped kids that could dance instead of just holding an audition, and they fly around in some large peach-shaped spaceship.

There aren't really a whole lot of people for me to thank, I basically came up with the route myself before even mentioning it in the forums. However, I do of course want to thank the SDA staff once again for all their work, which is greatly appreciated. I'd also like to thank FinalMinuet for making an improvement run that never found its way onto SDA (problem with one of the DVD's). He improved Wouter's previous run by 32 minutes; I pulled a couple ideas off of his run and used it as a time to beat. Also a big thanks specifically to Nate for uploading what existed of that run for me and doing all the tech stuff on this run that is currently beyond my grasp. :)

The 100% definition is all Fortune Dolls and weapons according to the official definition thread. Wouter's previous run collected all surprise packs as well. The reasoning behind those being excluded is that they're just extra lives; it would be the equivalent to collecting every 1-Up Mushroom in a Mario game.

I submitted another 100% run about a month before I finished this one, but I noticed many places of sloppiness and discovered a few new time-saving tricks so I decided to withdraw it while it was being verified and improve on it. I'm glad I did, as I tracked a little over 3 minutes worth of improvement. On top of that, prior to its updating the 100% definition was only fortune dolls and did not require collection of all of the skippable weapons. Therefore, I collected the two extra weapons and STILL managed to save minutes of time. I'm glad I went back and fixed it.

There's not really a whole lot to mention in terms of the run's execution, most of the time when I make a mistake you'll probably notice, as this game tends to take advantage of every time you screw up. You usually waste a second bouncing around after getting hit by an enemy or fall into some water and waste time trying to get back up. However a lot of the mistakes caused were just a result of bad luck (see Segment 12 Rose Throwers at the end). Also, the audio commentary exists, so you should listen to it if you don't mind listening to me for three hours. I try to at least mention everything that could use explaining though, so I don't know, maybe it'll be informative.

It's worth mentioning that there's a small health inconsistency between segment 1 and segment 2, the reason behind this is for whatever reason the save outside of Oedo Castle heals you once you load it up again. I noticed it also and tried it out three seperate times, and got full health restored every time so there's nothing out of the ordinary going on there. I didn't make a save there to exploit that. I went out of segment 1 with 4.5 hearts left, and don't even take any more damage before the health increase from Fortune Dolls would restore it anyway (when you get 4 and add a new heart, your health is automatically restored). I made the save there so I could better optimize Oedo Castle, since it took quite a few tries to get it to a high level of performance.

The audio commentary will explain what a segment-by-segment analysis would, so I'm not going to make one this time.

I could go into deep detail about all of the fights, but I shall not due to it being some time since I ran it and I have forgotten if I wrote any comments back then. A perfect run of this could possibly be less than 10 minutes including cutscenes, but I am not that perfect. Missing with the chain pipe can cost some seconds.