Nancy Drew's short sojourn in the nefarious town of Salem was never going to be short enough not to prove again her eternal serendipity. A wooden house belonging to the family of the judge who overlooked the big witch trials has been struck by a sudden though half-hearted case of combustion, presumed non-spontaneous and inciting a modern-day mob in desperate want of mollification. This 2019 game was long-delayed after an engine rethink but in a technological first for the series, Midnight in Salem does strut 360-vision akin to RealMyst, furnishing the most three-dimensional brainbreakers as well. Aside from a brand new voice actor for Nancy, it comes with a returning feature of the Hardy Boys. 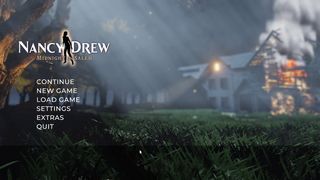 "Midnight in Salem" is a lot more linear than previous Nancy Drew games, making it easier to speedrun. As you can see, a good portion of this run is clicking through dialogue options and skipping every cutscene.

The places where I lost time were the decoder puzzle 17 minutes in and the final room with Mei, 27 minutes in.

Two glitches are used during the run. First, about 20 seconds in, I double-click on the drawer as it's being opened. For some reason, this skips a phone call with Deirdre. Second, I completely skip the computer puzzle about 20 and a half minutes in, by solving the puzzle before starting the speedrun. The game's short term memory stores the fact that the puzzle has already been solved, so there's no need to solve it again. Too bad it's the only puzzle which can be skipped that way!

For those of you wanting a more in-depth explanation of what goes on during the run, you can check out the version with commentary or my video where I do the run at a slower speed: https://youtu.be/R75tKxQp48U