The Sea of Darkness refers to the North Atlantic in this, the 32nd Nancy Drew adventure published in 2015 as always by Her Interactive. Nancy's goal is to discover the fate of Magnus Kiljansson, captain of the famous Icelandic seacraft called Heerlijkheid, who vanished during the ship's journey. The fixtures of the series, copious and extremely varied logic puzzles are the portals Nancy must unlock to advance the story and learn more about the local inhabitants, their influences and motivations. 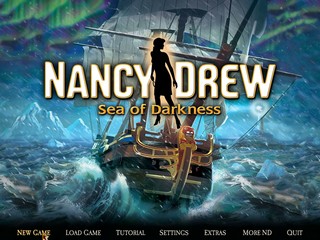 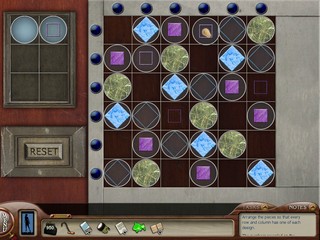 A copy of this run with my commentary is here: https://www.youtube.com/watch?v=f9m10ul3Dl0

My computer is two years older than the game, so the hardest part of the speedrun was getting the game to record without slowing down the game. With long segments like segment 6, it's not uncommon to have 1-2 minutes of lost time, simply because the game slowed down during navigation.

Another timewaster, which is unavoidable, is waiting for Gunnar to reappear in the pub in segment 6. He reappears after three minutes of real time. The route is designed so you solve seven puzzles AND hear a musical number during this waiting period. I got through the puzzles extremely quickly, and so I had to wait a comparatively long time (twenty seconds) for Gunnar to reappear.

This only happened to me about four times, out of sixty; with every other attempt, there was no wait for Gunnar to reappear, because game slowdown ate up at least twenty seconds.

I think the best way around the "mandatory wait for Gunnar" problem would be to re-route the run, so you do eight puzzles instead of seven. Either the dartboard puzzle or the crow's nest puzzle would work nicely here. The downside being that both those puzzles are over thirty seconds long, and you'd have to do backtracking with that route (either a backtrack to Soren's, or backtracking to the dartboard puzzle later to solve the other puzzles there).

A copy of this run with my live commentary is here: https://www.youtube.com/watch?v=tyoaD_Aj8Jg

In Sea of Darkness, amateur sleuth and master sleuth modes are identical, except for these ten puzzles:

Believe it or not, master sleuth mode is slightly faster than amateur sleuth mode, thanks to the fish puzzle.

Segment 4 has the biggest mistake of the run, which is the heater puzzle. Nancy and Dagny talk during this puzzle. When the puzzle is solved, you have to wait for either Nancy or Dagny to finish her current line of dialogue, before the game cuts away.

The lighthouse puzzle was amazing luck for me; I got the speed of 47.47 seconds (one white light every 6.78 seconds) on my second attempt. For reference, it took me over a hundred attempts to get my all-time best speed of 47.27, the last time I did a master sleuth speedrun for this game. Anything under a minute is acceptable for a speedrun, because the puzzle requires you to make at least 105 combinations, minimum, with the randomized dot locations.

If you saw my amateur sleuth speedrun, you'll know I had to wait 20 seconds for Gunnar to appear in Segment 6. Here, I only have to wait 10 seconds. This doesn't save any time, since he's on an automatic timer, but it looks a lot better.