Niko Jovic is a brilliant scientist who was found fatally electrocuted, and his electrical tech is worth millions, so someone surely wanted him dead, but who? Nancy Drew goes on a search and finds out the killer is now after her. Will she find the murderer before he finds her? 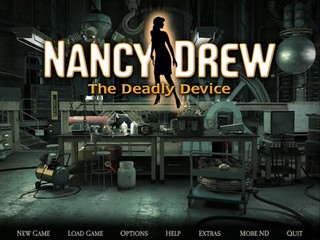 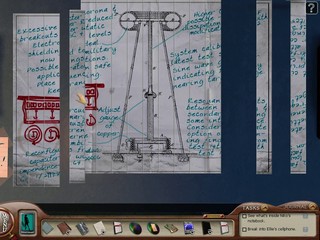 Thanks to Runawynd for all her help, with preparing this speedrun for Speed Demos Archive. My first speedrun for this game is on my YouTube Channel, which is www.youtube.com/user/arglefumph. That run is 59 minutes and 57 seconds long. Thanks to some new tricks and a different route, I was able to shave about four minutes and ten seconds off the original run time.

This is the intro section, where Nancy meets characters and learns about the murder case. I look at the binary chart upstairs and take the items from Ryan's area, for puzzles in the next video.

One of the biggest improvements in this run is double-clicking in the upper/left corner at the very start. This skips the forty-second cutscene of Niko's murder. Another new trick, which I do several times in the run, is interrupting dialogue. You see that at the very end, where I make a phone call, at the same time a scene plays in the background. If you time it correctly, Phone-Nancy cuts off Scene-Nancy's dialogue mid-sentence, which saves some seconds.

More introductory material here, as I meet Ellie and Gray. Aggregation is a pain, because it's a randomized puzzle. There are minor regularities (for example, round two will either start with two greens or two yellows), but luck was the main factor in getting through quickly.

Another new trick is the discovery that you do NOT need to get a high score at Aggregation. All you have to do is get onto the scoreboard, and the game treats it as if you got the high score. This allows me to play Aggregation partway through, instead of all the way through.

This segment is mostly setting things up, so I can do all three of Ryan's conversations at the same time. The first time I enter Ryan's area, I immediately leave and reenter to skip a forced conversation about a robot cat. I find evidence of Ryan's guilt, then start working on the somewhat long circuit board puzzle.

Deirdre shows up in this video. Deidre's main purpose in this game is to clear Ryan of all wrongdoing. The two ways to make this happen are to skip ahead a day by using the clock in the bedroom or to accuse Ryan and wait a few minutes for Deirdre to auto-call you. I went with the latter route.

One minor mistake I do in this video (and Segment 4) is saving by clicking on the save button, instead of tapping the "Enter" button.

The elevator in this game is rather slow, so I try to get inventory items ready or make phone calls while it's moving. That's why I call Deirdre in the elevator instead of immediately calling her back.

With the circuit board, you are supposed to use Nancy's clock to skip ahead half a day, before you can pick it up. As you can see at the end of this segment, the "Nancy is knocked unconscious" event overrides this requirement. Nancy's pain is my gain.

I use Deirdre to skip Nancy's dialogue after the Mason/Gray argument, then I talk with Gray. As you've probably noticed by now, a big part of this run involves talking to the characters as little as I possibly can.

This section is another change from my previous run, in that I get the capacitors and Ryan's book here, instead of much earlier in the game. It's not that much of a timesaver, but since I have to revisit Mason and Ellie's area anyway, I decided to put those things off until now.

Thankfully, you can solve the book puzzle as soon as you get the book list. You don't need to read the various books related to this puzzle.

I mess up a bit on the jigasw puzzle, but I make up for it at the end by connecting one piece on both sides, which is very difficult to do.

I solve the puzzle in Niko's book, at the same time the video plays. I purposely do NOT finish the book puzzle, so I can interrupt Nancy's dialogue with the scene that plays as you skip ahead to the next day.

This video is mostly plot-related stuff you can't skip.

The final major change to my previous run is how I deal with Victor and the fingerprint challenge. To make a long story short, I save myself a trip downstairs and back, by stealing Ryan's gummy bears. This also lets me distract Victor earlier.

To make a long story long, this section involves overlapping puzzles, which can be done in different orders. You must visit Ryan's area seven times, in the time period between Victor's arrival and Nancy seeing Victor's video.

The alternate strategy is to gain access to Niko's lab, before Victor appears in the office. This allows you to combine 3, 4, 5 and 6. It's impressive, but it's not a timesaver, because you still have to make separate trips for 1 and 7.

This is the longest segment in the run, and surprisingly, it's one of the most linear, straightforward segments besides the first one. The only real timesaver is the phone call trick, while Nancy watches the video of the murder and at the end of the murderer's speech.

I solve the final puzzle in about forty seconds, and the ending scenes play.