A green-or-otherwise gobbo-guy, or alternatively a pelican that's a mascot or something, sets to mounting towers that trailblazingly turn all 3D-like, pestered by details of hobbly bobblies hampering the dumbwaiter-informed ascent. Whatever you think it's called is not what your antipode thinks it's called, with appellations like Castelian, Kyorochan Land, Subline and Tower Toppler at least having been reported across various adaptations of a 1987 PC original. 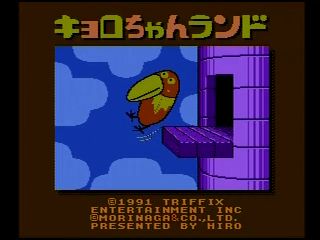 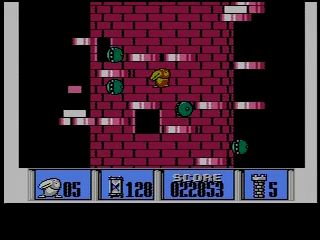 Disclaimer
I did this run on a Powerpak. In case it matters for future reference, I used a ROM with checksum d9b7bfd1a6d9773e64b0a8b46b43b7f3.

About the sound
There is a rather annoying buzzing sound during the levels. This is from the game itself and not a bad audio cable or wrong recording setting. It's possible to remove it by changing the sound in the settings to the game music playing instead of the sound effects, but that introduces a lot of additional lag and should therefore not be used in a speedrun.

For information about speedrunning Castelian and to get a better understanding of what's going on in this run, go to the guide in the SDA knowledge base (referred to as sdakb in my comments below):
https://kb.speeddemosarchive.com/Castelian_(NES)

Background
This run was quite overdue. I picked it up a while back as a side project, while doing attempts for games I knew would take a long time to get done (Ikari Warriors or possibly Adventure Island). Mostly to have something to distract myself with to avoid any motivation dips. I managed to get some routing done and on several occasions practice and do actual attempts. However, other things had priority, so it didn't result in any good runs. I did complete a TAS for the game though, which also helped improving the RTA route.

When I eventually ran out of other things to focus on and finally got around to give this game a serious go, it didn't take very long to produce this run. The game is fairly easy to execute compared to many other games, although maybe not as easy as it might look in the eyes of someone not familiar with it...

There are some aspects with this game that make it interesting to route, mainly in how you can create long sequences of enemy manipulations. However, it turned out to be a poor choice of speed game. The game generates a huge amount of lag and quite a bit of it is for all intents and purposes "random". Two similarly executed playthroughs can differ by several seconds without any way to control it. For a game this short and relatively easy to execute, that essentially means that the fastest time will be achieved by whomever is lucky to get the least amount of random lag.

Run comments
In this section I'll comment on things that went good/bad compared to the theoretical route in the sdakb.

Tower 1
No mistakes, but I've had over a second of less random lag in other attempts. Not common though.

Tower 2
No mistakes, but I've had over a second of less random lag in other attempts. Not common though.

Tower 3
I didn't intend to hit the first enemy with the shot. This cost 0.1s of countdown at the end of the level. Obviously not much, but still an unintentional visible mistake.
The random lag could have been less, but not by as much as in the first two towers. Overall, better than average pace so far, but maybe 1.5 secs behind the attempts with the best pace I've had.

Tower 4
No mistakes and not much time lost to random lag compared to my best attempts.

Tower 5
I managed to get the best outcome at the end. See the sdakb for details (this was "Case 1"). Unfortunately, there is an execution mistake near the very end. I misjudged the last enemy and was worried it was hurling against me and decided to shoot. The shot didn't connect with the enemy since it was moving the other way and I had to shoot a second time. The additional shot cost 0.3 secs. However, since I got the best enemy patterns and apparently very little random lag, this was still a very good level.

Tower 6
At 9:34, it's possible to make a pixel-perfect jump to the breaking floor tiles, instead of taking the lift. Skipping the lift ride ends up saving around one second. It's a fairly big time saver, but my success rate was too low to opt for it. There is some lag preceding this jump, making it difficult to time correctly.
The random lag was average and about a second behind my best.

Tower 7
No mistakes and very good random lag made this a few tenths of a second faster than my previous best split in this level.

Tower 8
I was a little off in my first actions and got case 'B', with reference to the sdakb, which is actually good. However, it then looks like I got a little unlucky with enemy positions and had to wait at 13:06. Jumping over that enemy is always tight in this setup, but it doesn't look like it was possible this time. There was also some slight hesitation at 13:25. Despite these these complaints, the time was only a few tenths off my best.

Final thoughts
I might not sound too excited about the result in the level-by-level comments, but most of that was when comparing the random lag with my best level splits. However, the variation is so big, that it's very unlikely to get perfect result in every level. In fact, this is very close to the best paces I've been on and the time is a few seconds lower than what I had hoped for.