Released in 2004, Nikujin is a freeware platformer where you navigate a ninja through a variety of obstacles, enemies and bosses.
Author's website is this: Ikiki's page.
Game link is: http://ikiki.sokushinbutsu.com/himoji/game/nikujin.zip (no direct linking, so you need to copy paste). 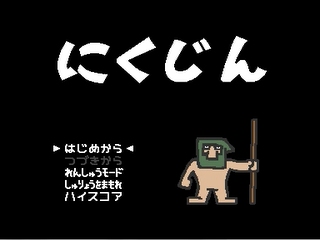 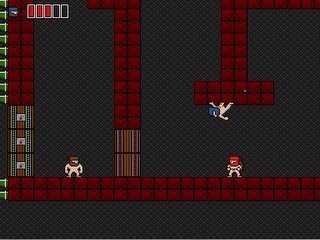 In 2009 I was watching Youtube speedruns of the Nikujin training level. I came across one that did a trick that I think the author called a "high jump" (unfortunately I can't find the video anymore). The author didn't explain how it was performed, and also didn't use it to do anything interesting, but I soon figured it out independently. A while later, I realised it could be used in a couple places on the training level to save a bit of time.

Now, in 2011, after remembering someone posted a Nikujin run on SDA, I found myself planning routes for the 10 levels. I did this all before actually watching Daiz's SDA run, but I had only a couple changes to make after seeing it. My route planning was very thorough, I spent a lot of time going through the game and finding more glitches and tricks than I ever thought possible. I was happy to realise that this run shows off all of the ninja's moves and almost all of his glitches and tricks. When they piled up I realised there was no way I could pull them all off in a single segment.

I figured out that as long as I restarted the game before dying or finishing a level, the game wouldn't be able to save that it happened. The problem was that I had no idea where Nikujin saved its data, so once each level was completed there was no going back. It's a really stressful way to play a game... not restarting in time means scrapping the whole run. I had a couple of panicked moments... but let's just say I was just extremely relieved when the timer at the end said 2:12.

Below are the techniques that appear throughout the entire run. After that is a breakdown of each of the 10 levels. The run is segmented per level so each level corresponds to a segment. Before I start, though, I'd like to take a quick moment to thank all of the SDA staff and everyone who helped with the run. So... thanks... I really appreciate it.

Back in 2007, I recorded the first no deaths speedrun of Nikujin ever.[1] However, it included quite a lot of mistakes and time-wasters, and was subsequently beaten by other people playing the game.

Now, in 2010, I'm back with new speedrunning techniques to make for what is pretty much the ultimate Nikujin speedrun. I made a few small mistakes here and there, but other than those the only real way to improve would be with additional luck, since the enemy behavior is highly random.

A breakdown of the techniques used in the levels:

Level 1: Ninja Fortress 1
After breaking the gate, taking the upper route is considerably faster than the lower route.

Level 2: Ninja Fortress 2
This is mainly just smooth movements. The one thing to note is the first drop to the red button: You need to slow down slightly in order to be able to boost instantly from the right wall.

Level 3: Ninja Fortress 3
Includes one of the biggest time-savers by skipping a large portion of the level completely via two pixel-perfect jumps on the right platforms that would be crossed during a dash under normal conditions.

Level 4: Inside 1
I make a small jump at the beginning as a pre-emptive measure against a bug that kills your dash speed after your first jump in this. However, it still happened, which slowed me down a bit. At the top level, I pull off another pixel-perfect jump to cross the spikes so that I don't have to stop and turn around for a dash from the left boxes.

Level 5: First boss
The boss is vulnerable to one-hit kill during the pause after he attacks with his both swords. To make him do the two-sword strike, you just need to run towards him and continue running past him.

Level 6: Dungeon 1
Nothing really special here, though I realized while watching the recording that I could've probably saved a few moments in the end by dashing from the top-level boxes instead of just running and jumping normally.

Level 7: Dungeon 2
I came up with a new technique for this level on one of the record attempts. This technique is the dash from the right wall at the start of the level. Do note that while it saves time, it's also a gamble: There's no guarantee that the purple enemy is looking left at the moment you get there. This ruined quite a few record attempts for me.
In this level I also made what is probably the biggest mistake in the entire recording, aka falling from the spike shaft in the end. This is one annoying spike shaft. There was also the waiting time earlier on the top level, where I had to stop for a while to wait for the guard to turn around so that I could neckstab him (only guards that aren't aware of your presence can be neckstabbed).

Level 8: Red Dungeon 1
This level has one of my favorite techniques right in the beginning: By being extremely fast, you can get directly up to the second level and jump over the green enemy just before he turns around. A slower player would have to hang underneath the bottom-left edge and wait until the green enemy walks all the way to the edge and turns around, and then wait some more until it gets to the appropriate position for a neckstab-jump.
When I go press the red button, it is crucial to kill the purple enemy: He can quickly chip away your health to lower than 5 after getting the life potion, which will make the upcoming bomb jump impossible.
After killing the purple guy on level 3, I use one of the green enemies down in the red button room to get to the button as intended, but instead of the intended way of waiting for the another green enemy to walk to an appropriate position for another neckstab-jump back, I simply drop down and use the left wall to get up.
On the top level where you have to kill the four green enemies in order to progress, I simply get detected by all of them and hide behind the box: After this, I can kill them all with a single neckstab. For the game's kill counter, this only counts as a single kill.

Level 9: Red Dungeon 2
No real time-saving techniques used in this level, just some luck in enemy behavior and good timing.

Level 10: Final bosses
First boss single-hit KO: Keep a distance so he does the staff throw. Hit his staff. Neckstab him while he's dragging his staff back.
Second boss single-hit KO: Keep a distance so that he will throw a... bullet. Hit the bullet so that it reflects back to the boss, and neckstab him while he's recovering from the hit.
Third boss single-hit KO: Stand on a ledge so that the boss does his dash move, jump out of his way to the wall on the left, walljump off and neckstab the boss while he's trying to keep his balance on the ledge. Stay away from him when he's dying, since he's going to explode before he's fully dead.