The successful sequel to everyone's favorite cutscene-filled game was released in May 1990. It is sometimes regarded as the best game in the NES Ninja Gaiden trilogy, probably because it is the easiest Ninja Gaiden to beat. Ninja Gaiden II also introduced Ryu's ability to summon shadow ninjas. 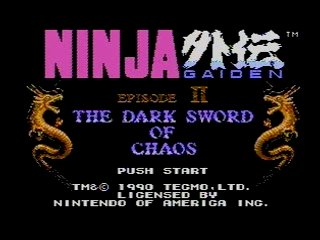 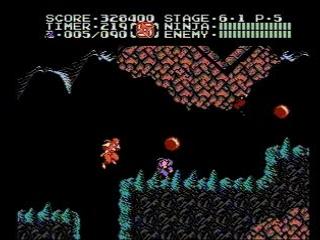 This game has evoled significantly in the past few years with more and more difficult tricks appearing. Hotarubi held the record for awhile with a 10:42, then Duckfist beat it 2.5 years ago with a 10:42. Ohon was way ahead of the time and shortly thereafter had a 10:25 which had tons of innovative (and hard) strats. This record held until November 2015, where Jorf got a 10:23, and then I happily obtained a 10:21 in December 2015, right before the AGDQ Trilogy Relay. At AGDQ I was able to collaborate with Gusmancini and Ohon, and we found better (and harder) strats. On his own, Jorf came up with a couple of strats and so did CartinaCow, making the game much more difficult. Since then I have gotten a 10:20 and finally this 10:19.

This run is extremely solid. At the time it was only ~0.4 seconds over my gold splits after act 3, and overall was 6 seconds off of my overall gold splits.

Below I will comment on any difficult tricks and any mistakes that I have made as long as my time.

1-1: There are two difficult tricks in this stage, one at 0:30 where I upfire, hitting the clone but not the guy, so that I can slash boost into him. The second is on the transition before the final screen - if I hold left the frame before I transition I will transition inside of the wall which lets me bypass the ladder.

Boss: This quick kill is very difficult, involving precise timing, moonwalking, and a slash cancel to end it.

2-1: This stage is straightforward - hold right the entire time.

2-2: The jump at 1:45 is really tricky, since the wind pushes you to the right. On the next screen, I slash around 2:00 so that my clone kills a bullet. This causes a weird memory glitch that makes the bird at the end of the stage inherit the bullets velocity, so it flies to the right instead of the left, allowing me to boost off of him.

3-1: This level is straightforward once you learn where the cues are to deal with the darkness.

3-2: This is possibly the hardest act in the game for the speedrun. There is a lot of precision needed with all of the wall jumps. Also at the end of the second screen you only have one frame to jump to actually land on that wall, and then you have to slash over it in three slashes which is very difficult. The boost with the crescent guy is also quite hard.

Boss: This is the hardest quick kill in the game, and I get it. It involves cancelling twice and moonwalking forward along with some precise timing.

4-1: Around 4:30 you only have one frame to jump off of that platform to land on the platform after slashing the bird. It is extremely difficult to judge (here I thought I made it, but didn't, so I lost time in reacting). I also get greedy in wall slashing at the end and use a fire wheel.

4-2: I lose some time getting the first ninpo since I used the fire wheel at the end of 4-1. On the second screen I kill the bird on accident. Usually you keep him alive, and he goes with you so that you can take the current to the last platform and boost off of the bird to get on it. Theoretically you can do the same trick as in 1-1 to hold left on the last frame to spawn in the wall at the end of this screen, but it's like a 1/5 trick and messing it up here would be devestating.

Boss: Sloppy up+b's made me lose a bit of time. Bosses in this game are all about timing the b presses and not mashing, and here my timing was off.

5-1: The second and third screens in this stage have impressive tricks that utilize being able to go over walls. They don't require much explanation, but are nice to watch.

5-2: This is Jorf's favorite level. Surprisingly, the ice physics in this game are very pleasant. The game would actually be much easier if all of the ground was ice. Fairly straightforward.

Boss: There is a (theoretical) quick kill for this boss which skips the first cycle and saves 2-3 seconds. It hasn't been done in real time but I've done it several times in half time. I don't think it will ever be done in a run though (if at all).

6-1: This is the easiest act in the game. Surprisingly the second screen is hardest, where you can use the slash + back trick and slash on the first available frame to keep that velocity for two slashes.

7-1: This is probably my favorite act. There are several ways to do this stage. At 8:43 there is a cool trick that involves buffering the slash twice to position a bird where you want it.

7-2: At the beginning of 7-2 my fire wheel is a bit off and it throws me off, so I don't do a slightly quicker (but much more difficult) version of the first damage boost off of the spitter. That boost though is very glitchy and its possible the hitboxes may not have been loaded correctly since my firewheel was off. at 9:30 there is a trick that I came up with which utilizes the invincibility frames from the bird to stay invincible for the first part of the crescent being in your sprite, so that you become un-invulnerable when it's on the left side of your sprite, boosting you right instead of left (the normal way). Unfortunately I have a frame perfect jump on landing which gives me a slow jump to the right.

Jacquio 1: This is the only boss to utilize a triple slash cancel, which involves slashing immediately before you land, then slashing after you land, followed by a jump into a slash. It's very tricky and I miss one of the three slashes which requires me to jump off of the wall to deliver the final blow.

Jacquio 2: There is a slightly faster but more difficult version which saves ~0.2 seconds

Jacquio 3: Here the pattern is random which is the only significant rng in the game. Still, with proper gameplay you can mitigate the rng by reading it. In theory you could triple slash cancel every slash here but it's too difficult since the shrimps have random spawn speed, trajectory, and velocity. Again my timing is a bit off and some slashes are slow. The boss kill is still solid though.